JAKARTA -- Indonesia's President Joko Widodo on Monday offered to host a planned meeting between U.S. President Donald Trump and North Korean leader Kim Jong Un, while stressing that peace in the Korean peninsula is beneficial for all in the region.

Last week Trump said the prospective locations for the historic meeting had been narrowed down to a choice of two. A U.S.-Japan diplomatic source said the U.S. wanted to hold the meeting in Singapore, while North Korea favors Mongolia. Trump also suggested the meeting would take place within "the next three or four weeks."

Widodo on Monday told a press conference after his meeting with the ambassadors of North and South Korea in the Presidential Palace in Jakarta that he "offered to host the planned meeting -- if there will be one -- between Kim Jong Un and President Donald Trump" and that the archipelago nation "is ready" to host such an event.

The Indonesian president also revealed that the North Korean ambassador said he would report the offer back to Pyongyang. Widodo added that Indonesia fully supported peace talks in the Korean peninsula as they would affect stability in the Asia-Pacific region and the rest of the world.

"[We want] our region to become cooler and calmer so we can all concentrate on physical and economic developments," he said. 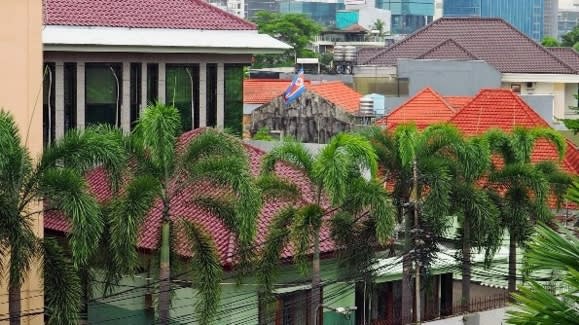 The North Korean embassy in Jakarta: Taking a non-aligned diplomatic stance, Indonesia has diplomatic relations with North and South Korea and the U.S. (Photo by Jun Suzuki)

Indonesia has long held a position as a non-aligned member of the international community, taking neither the West's nor the East's side during the Cold War era. It has a diplomatic relationship not just with North Korea, but also with other parties closely concerned about the rogue nation, including South Korea, the U.S., Japan and China.

The country -- which has a North Korean embassy -- has previously seen diplomatic events related to North Korea play out on its soil, most notably the reunion of Soga Hitomi, a Japanese woman who was abducted by North Korea, with her husband and former U.S. soldier Charles Jenkins in the capital Jakarta in July 2004.

However, feelings among Indonesians towards the rogue nation took a turn for the worse after the assassination of Kim Jong Nam, the current North Korean leader's half-brother, in Malaysia in February 2017. An Indonesian woman, one of two who attacked Kim with a nerve agent at Kuala Lumpur International Airport, is viewed in Indonesia as having been manipulated by Pyongyang.

President Widodo is now also placing more emphasis on his country's relationship with South Korea rather than on its historic relationship with the North, as inbound investment from the South increases. He has been critical of the North's nuclear and missile development programs during international gatherings, such as the Association of Southeast Asian Nations summit. 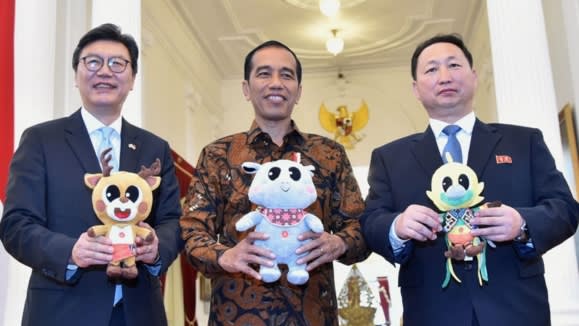 Indonesian President Joko Widodo, center, and the ambassadors to Jakarta of North Korea, right, and South Korea, left, hold mascots of the 2018 Asian Games after their meeting in Jakarta on April 30. (Photo courtesy of the Indonesian president’s office)

Meanwhile, the two Koreas are set to intensify talks on collaboration over the upcoming Asian Games in Indonesia.

South Korean Ambassador to Jakarta Kim Chang-beom said the regional sporting event was among the topics discussed on Monday.

Confirming previous reports, he said both Koreas were "committed" to jointly participating in the event which starts in August in the two Indonesian cities of Jakarta and Palembang.

"We will be looking forward to having working-level discussions on this Asian Games between South and North Korea -- which [we are calling] 'sports talks'," Kim said. "In the coming months we will be able to approach [the Indonesian National Olympic Committee] and the Indonesian government for detailed collaboration on how to jointly participate into the Asian Games."