SEOUL -- North Korea has staged days of celebrations following the Nov. 29 launch of a ballistic missile it claims can strike anywhere in the U.S. But behind these outward displays, sources paint a grim picture of a struggle for existence that suggests a different reason for leader Kim Jong Un's apparent haste in declaring success.

At the Musan iron ore mine, one of the biggest in Northeast Asia, workers hanging on after waves of layoffs now wait even longer for their pay and food disbursements. Meanwhile, at the jangmadang black markets scattered across the country, where seven out of 10 North Koreans go to put food on the table and clothes on their backs, vendors are growing scarce.

Trucks face strict inspections by police amid a nationwide campaign to find alternatives to gasoline. Even high-ranking Workers' Party of Korea members have been instructed to "walk 10,000 steps a day" rather than use a car. China restricted exports of refined petroleum products to its neighbor, a flow that Pyongyang depends on to keep automobiles running -- a vital mode of transport in a nation that lacks widespread high-speed trains or air travel.

The relative stability of prices for rice and consumer goods as well as for North Korea's currency owes to rising import substitution. Chinese-made products previously accounted for over 80% of items sold at the black markets, said Kim Young-hui, who heads North Korean economic research at Seoul's Korea Development Bank. But now, domestic goods make up the majority of items.

This shift reflects the extreme measures taken by the Kim regime amid heavy economic sanctions from the United Nations Security Council. Kim ordered domestic output increases in many areas of the economy. North Korean sources say Pyongyang restarted parts of the Kaesong industrial zone -- a cooperative effort with South Korea -- to produce consumer staples and clothing for the North. Former South Korean President Park Geun-hye last year closed the cluster of factories stationed just north of the demilitarized zone that divides the peninsula.

Growth in North Korea's construction budget has slowed to 2.7% this year, one-seventh the pace of 2016. The high-rise apartment buildings and other big projects in Pyongyang meant to flaunt economic progress under Kim's rule have given way to building public-sector facilities of more benefit to ordinary North Koreans.

The young leader, lacking in personal charisma, is said to be preoccupied with his image and fears losing what popular appeal he has. Military units are reportedly under strict orders not to harm villagers when soldiers collect rice for their winter stockpiles.

North Korea has multiple economies. Official spending is approved by the Supreme People's Assembly, the country's legislature. But a military component also exists to pay for Kim's nuclear and missile programs, as well as a sector consisting of luxuries for the elites. A complex network of aboveboard and illicit activities pumps hard cash into a slush fund that has enabled the Kim dynasty to last three generations. The international sanctions pose their most serious threat to this funding that sustains the regime's control.

A full embargo on coal, iron and other North Korean commodities imposed by the Security Council in August will reduce Pyongyang's foreign-currency income by $1 billion, the South Korean government estimates. A follow-up resolution in September banned imports of North Korean garments and the issuance of work permits to the country's diaspora of laborers, a key source of remittances. 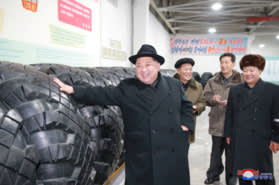 Strict enforcement of these sanctions would deal a one-two punch to the regime's authority and the nation's already weak economy, perhaps finally stalling Kim's vaunted two-track policy of nuclear and economic development.

Luxuries like imported mobile phones and chocolates are increasingly appearing at the government-run stores used by Pyongyang to siphon the foreign currency held by elites, reports say. Kim's frequent visits to factories, farms and elsewhere on the economy's front lines recently suggest a leader fretting over whether his orders are being carried out.

Many defense analysts think North Korea still needs time to perfect a nuclear-tipped missile ready for deployment. But the strain on the country's distribution system hints that Pyongyang's surprising declaration of success in becoming a nuclear power may be an attempt to pull the U.S. into direct negotiations, even as North Korea scrambles to rebuild its economy before the regime loses financial control.

The day after the Nov. 29 declaration, Supreme People's Assembly chief Kim Yong Nam told visiting Russian parliamentarians that North Korea was ready to negotiate with the U.S., as long as Washington recognizes it as a nuclear power, Russian media reported. The same day, North Korea said it would accept a visit by the U.N. political affairs chief.