SEOUL -- North Korea agreed on Friday to completely denuclearize the Korean Peninsula, as South Korea scrambled to de-escalate tensions between the U.S. and the North over its nuclear weapons program.

"South and North Korea confirmed the common goal of realizing, through complete denuclearization, a nuclear-free Korean Peninsula," the declaration said.

The statement, and Moon's efforts to change the North Korean provocations, led some to give a guarded welcome to the two leaders' achievement.

"I think North Korea came one step further by saying complete denuclearization with no conditions," said Jin Chang-soo, president at the Sejong Institute, a think tank in Seongnam, South Korea.

U.S. President Donald Trump tweeted, "After a furious year of missile launches and Nuclear testing, a historic meeting between North and South Korea is now taking place." He added, "Good things are happening, but only time will tell!"

Lu Kang, a spokesperson for the Chinese foreign ministry, said the summit's positive outcomes are conducive to promoting reconciliation and cooperation. "China welcomes it and extends its congratulations," Lu said.

Foreign ministers of the Association of Southeast Asian Nations, meeting in Singapore, also applauded the announcement.

"The ministers are encouraged by these positive developments and urge all concerned parties to work towards reducing tensions, and the complete, verifiable and irreversible denuclearization of the Korean Peninsula," they said in a statement. 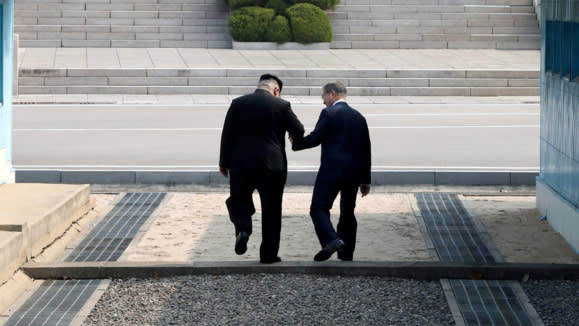 Kim surprises Moon by inviting him to the North Korean side of the demarcation line between the two countries.   © Reuters

North Korea's nuclear program is the issue of most concern for the U.S. and its allies. The reclusive communist state conducted missile tests at a rate of nearly twice a month last year. In September, the country conducted its sixth and most powerful nuclear test, of what was seen to be a hydrogen bomb. In November, the country fired a missile that is believed to be capable of reaching major U.S. cities, prompting the international community to impose crippling economic sanctions on the North.

Starting this year, the Pyongyang began a diplomatic outreach, much to the surprise of many. The latest summit is an effort by the North and the South to keep diplomacy on track and keep up hopes for a much anticipated summit between Kim and Trump.

Kim last month said he is "committed to [the] denuclearization of the peninsula," but the statement at the time raised more questions than it answered: How far does North Korea intend to go in terms of eliminating its nuclear weapons program? What does he want in exchange from the U.S.?

Washington and Tokyo are demanding that Pyongyang dismantle its nuclear program in a complete, verifiable and irreversible manner -- a process that would require intimate inspections of military sites across North Korea.

Friday's joint statement did not indicate the means of achieving denuclearization. It also fell short of specifying the time frame for realizing its promises, leaving many to speculate that North Korea will continue to maintain its nuclear weapons.

The two Koreas also agreed to declare a formal end to the Korean War and pursue the signing of a peace treaty.

The war was fought from 1950 to 1953 between the North and Chinese volunteer forces on one side and the South and the U.S.-led U.N. forces on the other. The military combat ended with a ceasefire, leaving the two Koreas technically in a state of continued conflict. 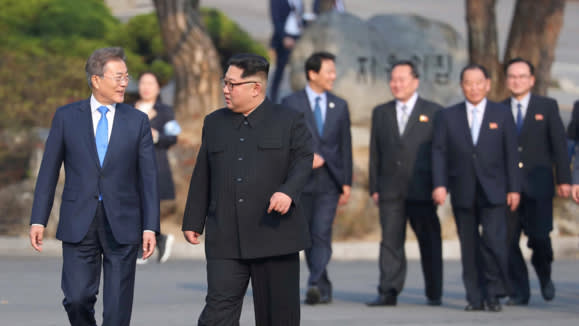 Moon and Kim walk together ahead of the inter-Korean summit.   © Reuters

During Friday's summit, Kim sounded as if he was trying to chart a new course for his country. "I hope to write a new chapter between us. This is a starting point for us," he said.

North-South relations over the decades have often been marred by mutual recriminations and false hopes. The two countries have come close to the brink of war on numerous occasions. "I hope we won't go back to square one again," Kim said.

Kim appealed to the nationalist sentiment of Korean people when he took to the podium to announce the declaration. "North and South are one family and one nation. We are not supposed to fight each other. I crossed the border at the Panmunjom to make all the nation live peacefully," he said.

Throughout the summit, Moon saved no praise for Kim for deciding to visit the South, in an apparent move at trying to win his trust. At one point during the summit, Moon engaged in a one-on-one conversation with Kim for 30 minutes on a bench outdoors, in an attempt to affect the North Korean dictator who rarely has stepped outside his country.

"We will never move back," Moon stressed at the declaration announcement. He highlighted concrete initiatives that are taking shape, such as the establishment last week of a telephone hotline between the offices of Moon and Kim, a joint liaison office at Panmunjom and letting officials from the two Koreas work together there, the creation of a joint office in an industrial park in the border city of Kaesong, and Moon's promise to make a reciprocal trip to Pyongyang this fall.

South Koreans also welcomed the apparent rapprochement between the two countries. Sinyoung Kang, a 55-year-old resident in Goyang, said, "I am excited about the summit," adding that people around her are now hoping that the two Koreas are getting closer to reunification.

Lim Soo-hyang, 38, a student at Handong International Law School in Pohang, said, "I watched the two leaders shake hands with my classmate's mobile phone during a class. It was very impressive that I had some tears."

Some experts are looking at the day's summit with more caution.

"North Koreans have been developing nuclear weapons for at least 40 years or more and they are not going to give them up," said Robert Dujarric, director at the Institute of Contemporary Asian Studies at Temple University in Japan.

"The idea of complete denuclearization would mean destroying the North Korean nuclear assets, including massive intrusions by foreign inspectors everywhere in North Korea. That is not going to happen," Dujarric said.