North Korea wants to win more than medals at Olympics

SEOUL -- As ten North Korean skaters and skiers arrived in South Korea on Thursday to take part in the Winter Olympics in Pyeongchang, South Korea, the world is reminded, again, that there is nothing separating sports from politics. North Korea watchers see the regime's ostensibly last-minute decision to send a team to the games, which begin on Feb. 9, as a carefully calculated move.

Even the North Korean ski resort where athletes from both Koreas trained together on Thursday is laden with political significance.

Leader Kim Jong Un ordered the construction of the resort, called Masikryong, in June 2013, demanding it be finished by the end of that year. The hasty project, which involved the military, gave rise to the term "Masikryong speed" to describe a breakneck pace. The complex features 10 pistes on 1,400 hectares of land, with 50 resort facilities including a skating rink and hotel.

In 2016, a photographer from Singapore spotted a European ski lift there -- a luxury item on the list of banned exports under United Nations sanctions against the country.

Kim's rush to build a world-class resort followed North Korea's tradition, since the 1953 Korean War armistice, of promoting sports as a way to build national unity.

Upon becoming supreme leader at the end of 2011, Kim called for turning the impoverished country into a major "sports power." In 2012, he set up a National Sports Guidance Committee to supervise athletic policy. And last year, the regime increased the public health budget by 13% and the sports budget by 6%, according to data from the Korea Institute for National Unification in South Korea. Sports offer Kim a way to cast himself as an "approachable" leader who cares about the well-being of his people. In Pyongyang, ordinary citizens are encouraged to take up athletic pursuits. Last October, athletes from around the country converged for a festival featuring 470 events in 37 different sports.

"We should create a new sports myth in international events," a member of the guidance committee said during a feast in December, held to celebrate the North Korean women's football team's victory in a tournament in Japan. 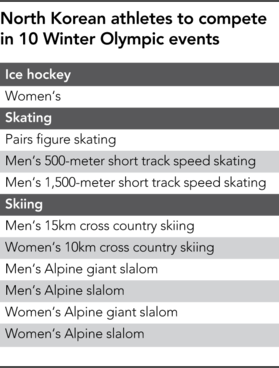 In addition to strengthening national bonds and shoring up his own power, Kim apparently sees sports as a path to a breakthrough with the international community, which has been tightening sanctions over the regime's nuclear weapons and missile programs. This is the view of the Korea Development Institute, a think tank affiliated with the South's government.

Some experts also see the decision to participate in the Pyeongchang Olympics as an attempt to open a crack in the U.S.-South Korea alliance.

This much seems clear: North Korea yearns for prestige, and the Olympics are the biggest stage it could hope for.

Its athletes have performed relatively well on that stage. At the 2012 Summer Games in London, the country's small delegation won six medals, including four golds in men's and women's weightlifting and women's judo.

The team won seven medals at the Rio Games in 2016.

North Korea's medalists return home to warm welcomes. Depending on their achievements, the government gives them prize money, cars and even luxury condominiums, according to a North Korean reporter who covered the London Games. They are also eligible to become members of the ruling Workers' Party, which entails various privileges.

But losers face a cruel fate, by some accounts. A former member of North Korea's judo team, who defected to the South in the 1990s, once said that losing to a South Korean rival in an international competition usually led to forced labor in a coal mine. Some North Korean sources say that no longer happens. But there is little doubt that North Korean athletes compete under intense pressure from the regime. Medalists never fail to express their gratitude to the supreme leader and their pleasure in making him happy.

North Korea usually excels at sports that do not require costly facilities and gear, and in which competitors are divided into weight classes. Because the country's athletes are in general at a physical disadvantage, they tend to do well only in lightweight categories.

North Korea has had less success in the Winter Olympics, as most of the sports entail significant expenses.

But Kim has made sizable investments to promote winter sports as well -- Masikryong being one example. The government has also built skating rinks around the country, including the People's Outdoor Ice Rink in Pyongyang.

These projects are envisioned as moneymakers, generating crucial revenue from relatively well-off domestic consumers as well as overseas travelers. Wonsan, the area home to Masikryong, was designated an international tourist zone in 2014.

From Kim's perspective, the upcoming Olympics are a perfect opportunity to boost national morale and impress the world. This explains why he agreed to host South Korean athletes at Masikryong and send a team of 22 North Koreans to Pyeongchang.