Trump and Abe agree to meet ahead of Singapore summit WASHINGTON/SEOUL -- Preparations for a June 12 summit between the leaders of the U.S. and North Korea are back in full swing, with negotiators at the Panmunjom truce village inside the demilitarized zone working to set the details of a denuclearization deal that would allow both sides to claim a success.

Meanwhile, U.S. President Donald Trump and Japanese Prime Minister Shinzo Abe spoke over the phone on Monday, agreeing to meet ahead of the U.S.-North Korea summit in Singapore. They will likely speak on the sidelines of the Group of Seven summit starting June 8 in Charlevoix, Canada. Some in the Japanese government say Abe could visit the U.S. around then as well.

Trump and Abe agreed to work together "under a shared understanding and policy," the Japanese leader told reporters afterwards. Both countries want North Korea to denuclearize in a complete, verifiable and irreversible manner.

Trump updated Abe on recent developments related to the summit, while Abe stressed the need for a resolution on the Japanese citizens kidnapped by Pyongyang decades ago.

A White House statement said that in their call, Trump and Abe "affirmed the shared imperative of achieving the complete and permanent dismantlement of North Korea's nuclear, chemical, and biological weapons and ballistic missile programs." 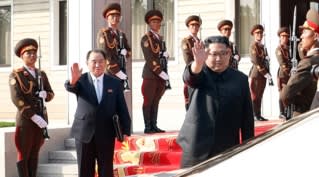 These are the first working-level talks between the countries. Past meetings with the North Koreans occurred at the very top levels, such as the two inter-Korean summits between Kim and South Korean President Moon Jae-in, and the visits to Pyongyang by U.S. Secretary of State Mike Pompeo. While there is a general consensus on working toward denuclearization, laying out the time line and verification process will be crucial before the countries can reach any formal agreement.

Kim, now the ambassador to the Philippines, is an expert on North Korean affairs. He has served as special representative for North Korea policy at the State Department, and was part of the American delegation to the six-party talks on North Korea in 2005, which produced a joint statement toward denuclearization.

The North Korean team includes Vice Foreign Minister Choe Son Hui, whose statement slamming U.S. Vice President Mike Pence last week led Trump to temporarily cancel the summit. She was a translator for the North's delegation to the six-party talks from 2003 to 2008.

Choe is said to be the daughter of former Premier Choe Yong Rim, and was rumored to be "the translator with more power than her superiors." She and Kim know each other from then, though they exchanged harsh criticism at an international meeting in Beijing in 2016.

The two sides are still divided on the specifics for denuclearizing North Korea, with Washington wanting to complete the process quickly and Pyongyang pushing for a step-by-step denuclearization of the entire peninsula. The U.S. does not want to go ahead with the summit unless the North first agrees to allow inspections by the International Atomic Energy Agency, give access to its nuclear facilities, and dispose of nuclear warheads.

North Korea, on the other hand, is seeking a guarantee of the survival of the Kim Jong Un regime. It likely aims not only for a political agreement, such as a peace treaty formally ending the Korean War, but also an end to the antagonism between Pyongyang and Washington.

Meanwhile, Deputy White House Chief of Staff Joe Hagin is attending a separate meeting with North Korean officials in Singapore to discuss the logistics of the summit, such as the schedule, ceremonial details and security.

South Korea is now also considering a trilateral summit with Trump and Kim immediately after their meeting. It is hoping to issue a three-way peace treaty should the U.S. and North Korea reach some sort of agreement on denuclearization.