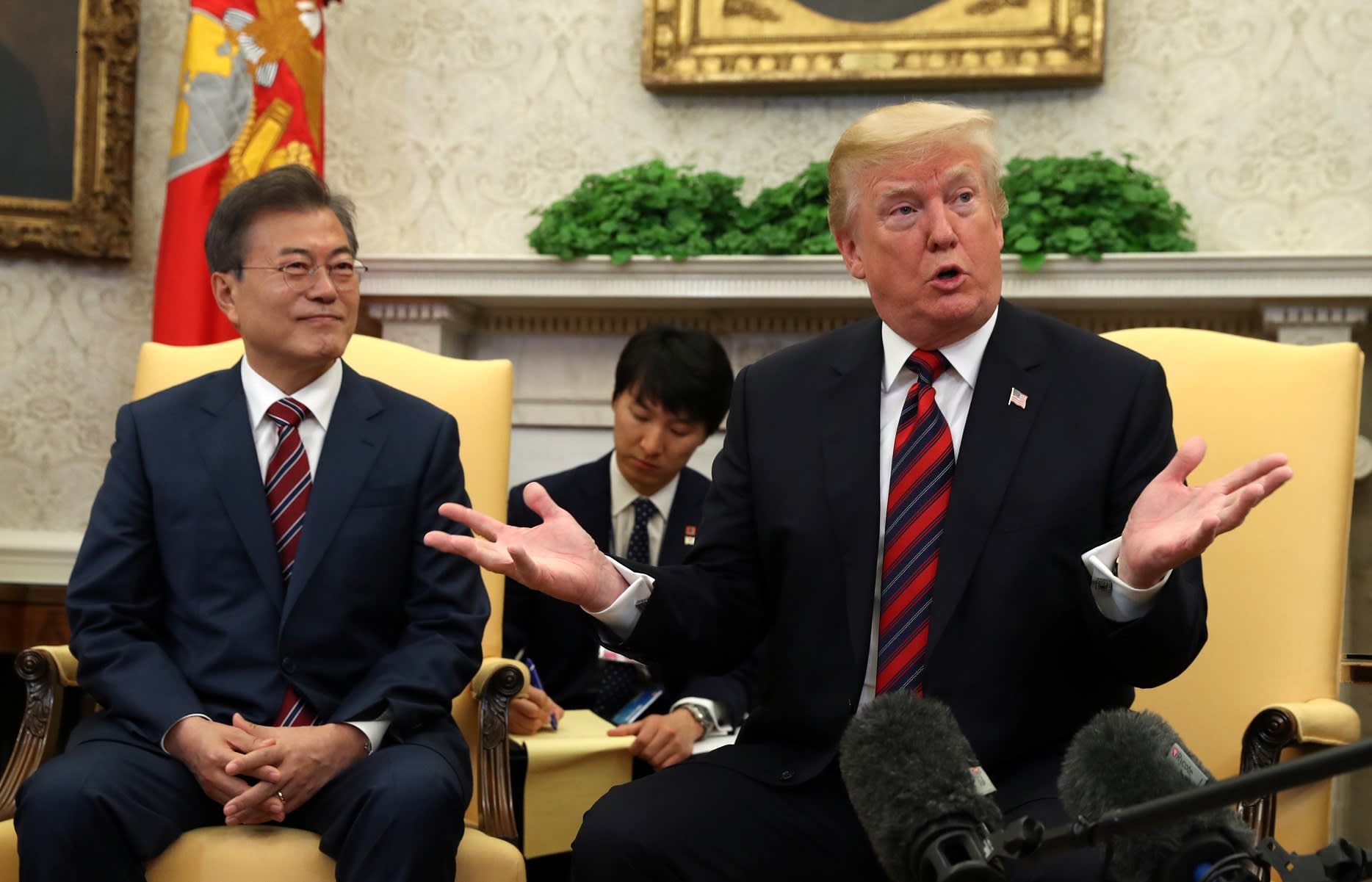 NEW YORK -- U.S. President Donald Trump said on Tuesday that his scheduled June 12 meeting with North Korean leader Kim Jong Un may happen at a different time, signaling that it will be postponed if conditions are not met. The president personally guaranteed the safety of Kim if a deal were to happen, but insisted that denuclearization must be a part of that.

"Things are moving along with the North Korean summit," Trump told reporters at the White House ahead of a meeting with his South Korean counterpart, Moon Jae-in. But he added, "There's a very substantial chance it won't work out," saying neither he nor Kim want to "waste a lot of time."

Though he downplayed the chances of success and suggested that it would be "OK" if the meeting did not happen as planned, Trump has political capital resting on the success of the meeting, some experts have suggested.

Secretary of State Mike Pompeo told reporters at a news briefing later on Tuesday that the U.S. is still aiming for a June 12 meeting.

"We are working to make sure that there's a common understanding about the contents of what will be discussed, but I'm optimistic," Pompeo said. "But again, this could be something that comes right to the end and doesn't happen. As the president said, we'll see."

"North Korea has a chance, really, to be a great country, and I think they should seize the opportunity and we'll soon find out whether or not they want to do that," the president said in his earlier remarks.

Trump also expressed concern to reporters at Beijing's influence over Kim. Referring to Chinese President Xi Jinping as a "world-class poker player," Trump added to an earlier suggestion that Kim's attitude changed after a second meeting with Xi and noted his discontent despite a friendship with the Chinese leader. Some 250 coins were minted by the U.S. to commemorate the Singapore summit with Kim, which has yet to take place. (Photo courtesy of White House Communications Agency)

The president has repeatedly praised Kim for his apparent willingness to negotiate and touted his own reputation as a skilled deal-maker. A commemorative coin featuring the profiles of Trump and Kim in the context of peace talks was also unveiled by the White House, referring to Kim as "Supreme Leader."

In their meeting, Trump and Moon are expected to lay out what to offer the North in exchange for full denuclearization. Trump has also promised the safety of North Korea's leader, attempting to put to rest concerns from the North of a Libya-style dismantlement of its nuclear program and a violent regime change.

"South Korea, China and Japan ... they will be willing to help and I believe invest very, very large sums of money into helping to make North Korea great," he added.

Pompeo, who has met twice with Kim in Pyongyang, noted that he had spoken generally with the leader about the possibility of American investment in the North. "I do have a real sense that he would find American investment, American technology, American know-how of real value to his people," he said.

"I do think it's something that -- if we get this right and we get the denuclearization right -- that America would be quite capable of delivering them with lots of things that would make life better for the North Korean people," Pompeo said.