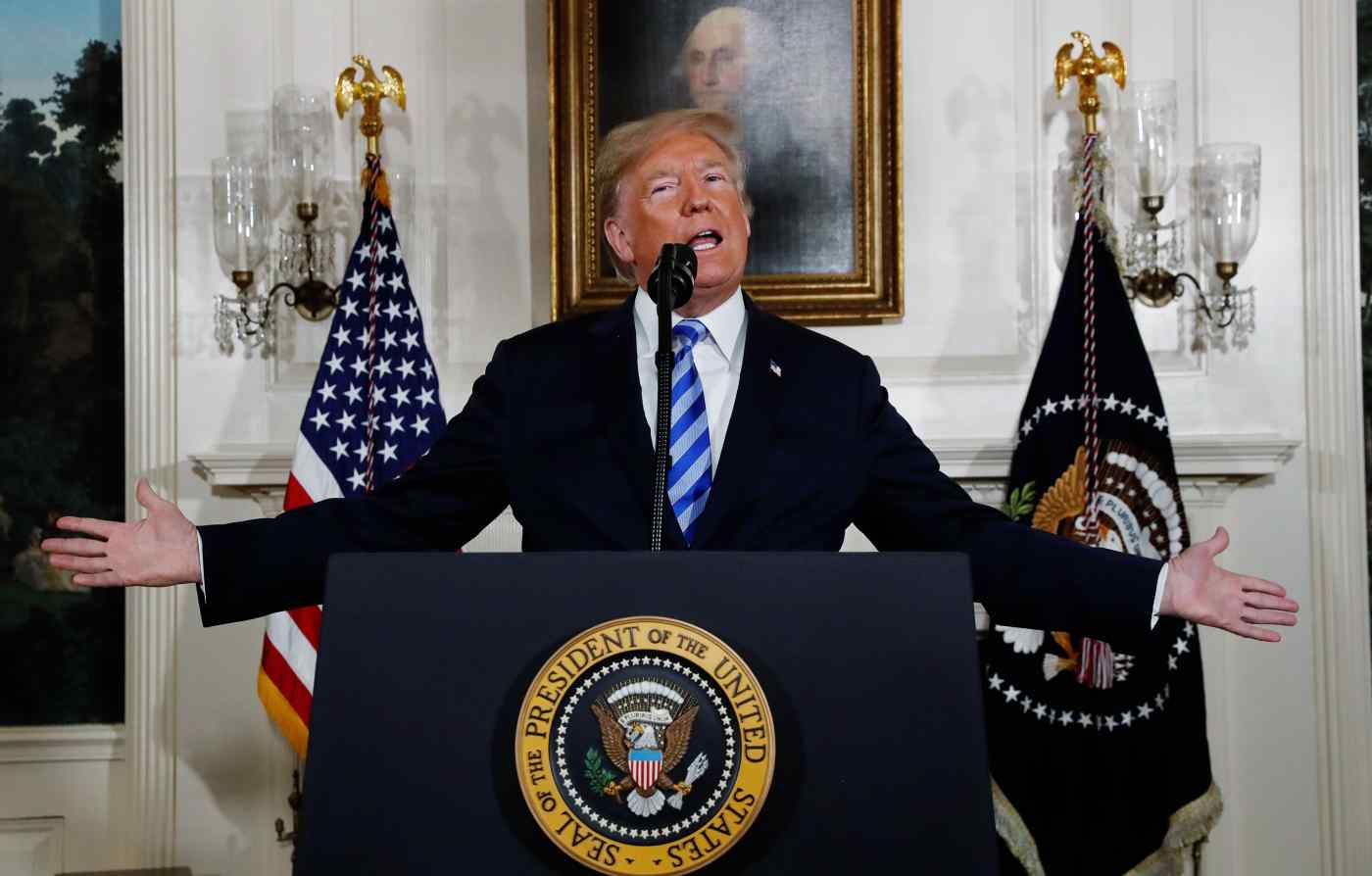 U.S. President Donald Trump announces his intention to withdraw from the Iran nuclear agreement in a statement in the Diplomatic Room at the White House on May 8.   © Reuters
ARIANA KING, Nikkei staff writerMay 9, 2018 07:25 JST | North Korea
CopyCopied

NEW YORK -- President Donald Trump's decision on Tuesday to withdraw the U.S. from the Iran nuclear deal seeks to send a blunt message to North Korean leader Kim Jong Un that Washington will not settle for a deal that falls short of its goal.

In a televised speech at the White House, Trump said the 2015 deal to stem Iran's nuclear development "was a horrible, one-sided deal that should have never, ever been made," and that allowing it to stand would result in a "nuclear arms race in the Middle East." The U.S. will reimpose nuclear and economic sanctions, he said.

The move was long expected, despite strong opposition from foreign allies and many officials within the administration itself. Trump had previously called it "the worst deal ever" and justified the decision by citing Iran's sponsorship of terrorism and blaming the agreement's shortcomings in permanently keeping the country from developing nuclear weapons.

"Today's action sends a critical message: the United States no longer makes empty threats," he said. "When I make promises, I keep them." Trump noted his upcoming summit with Kim.

"We look forward to having a very great success," the president said of that meeting, expected as early as this month. He said that "relationships are building with North Korea -- we'll see how it all works out."

Speaking to reporters in Washington after the announcement, Trump national security adviser John Bolton said the decision on Iran signaled to Pyongyang that the U.S. will not accept inadequate deals. Bolton has long been critical of the Iran agreement and suggested in multiple interviews before his appointment that the North could not be trusted in negotiations.

"While it is difficult to determine how North Korea will interpret the decision, I do agree that this decision does send a very strong message about U.S. expectations for a deal with North Korea," said Lori Esposito Murray, senior fellow at the Council on Foreign Relations, in an email interview.

The decision was met with disappointment and concern from the U.S. allies France, the U.K. and Germany, as well as the United Nations.

The agreement was negotiated between the Iran and nuclear powers the U.S., the U.K., France, Russia and China, along with Germany and the European Union. The deal took effect in 2015, stemming Iran's ability to develop nuclear weapons for at least a decade -- with strict verification measures by the U.N.'s International Atomic Energy Agency.

"The fact is, this was a horrible, one-sided deal that should have never, ever been made," Trump said. He called the agreement -- a cornerstone of predecessor Barack Obama's foreign policy strategy -- "defective at its core." But Trump also expressed a willingness to renegotiate it.

"With the U.S. withdrawal from the Iran deal, what happens to the JCPOA is unchartered territory," Murray said, using the abbreviation for deal's official name, the Joint Comprehensive Plan of Action. Though Iran itself and other countries remain in the agreement, the effect of U.S. sanctions on the ability of other countries to trade and invest in Iran will have a significant impact on whether it is in Tehran's interest to stay, she explained.

An Iranian withdrawal would lift the deal's 10- to 15-year constraints on the nuclear program, restrictions that "lengthened the breakout time for Iran to develop a nuclear weapon, from a couple of months to a year," Murray said. "Without the JCPOA, Iran could return to the shortened breakout time much sooner."