Some 70% of trade between China and North Korea passes through the port city of Dandong.   © Kyodo
North Korea Crisis

BEIJING/DALIAN, China -- On Oct. 30, the main port operator of the Yalu River city of Dandong that handles 70% of China's trade with North Korea failed to make a 1 billion yuan ($150 million) payment on a bond. The port group will owe another 4.4 billion yuan next year, and whether it can make that payment is far from certain. 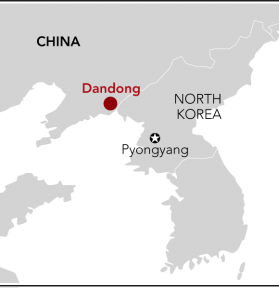 While bond defaults rarely trigger immediate bankruptcy filings in China, the financial woes of Dandong Port Group point to much bigger problems for this struggling border region. Namely, sanctions on North Korea are starting to hurt China's own businesses.

Founded in 2005 as a Sino-U.S. joint venture, Dandong Port Group not only runs the city's port, it was involved in distributing North Korea's coal and iron ore to the rest of China.

But after Pyongyang's fifth nuclear test in September 2016, the United Nations Security Council started tightening restrictions on the flow of goods and money to North Korea's military-industrial complex. The U.N. approved a blanket ban on imports of coal and iron ore after the country tested an intercontinental ballistic missiles this year. China has imposed its own sanctions. 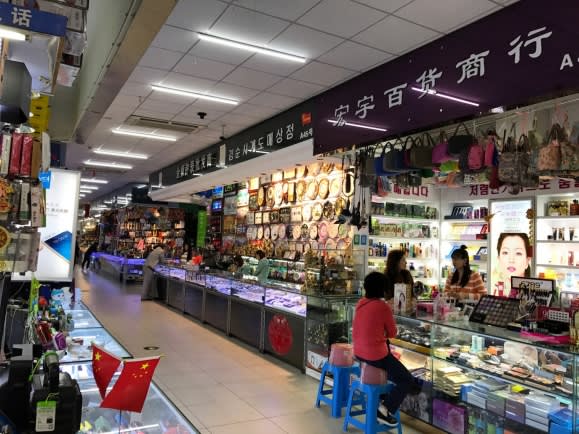 A shopping mall that used to see many North Korean shoppers is now quiet. (Photo by Tetsushi Takahashi)

Trade between China and North Korea fell 3% to $4 billion for January to September from the same period a year earlier, according to Chinese customs authorities. Although the dollar figure is little changed, mainly because of a surge in coal prices, Chinese imports of the commodity actually fell more than two-thirds by volume. Iron ore imports, which had been growing earlier this year, shriveled to just 2.5% of year-earlier levels in September due to the embargo. Dandong Port Group's revenue dropped 16% on year in the January-March quarter. The heavily indebted company's principal and interest payments amount to 30% of its top line.

"Dandong Port Group's earnings were already suffering from a slowdown in the local economy," a financial source noted. With the added pressure created by the sanctions, "it was only a matter of time before it defaulted," the source said.

Beijing has ordered joint ventures with North Korean companies and individuals to close by January 2018, stoking rumors in the Dandong area that all North Korean laborers will be gone by year-end. "I stopped seeing North Korean workers at factories in the city around October," a local said.

North Koreans are employed at textile mills and restaurants across the region, some believed to be operated jointly with North Korean players. Shutting them down would deal a heavy blow to the local economy.

The northeastern provinces of Liaoning, where Dandong is located, Jilin and Heilongjiang are also China's worst economic laggards. All grew more slowly than the national average in the January-September period. Aging populations and an exodus of young workers continue to hold them back.

These provinces rely heavily on energy and smokestack industries to power their economies and had seen trade with North Korea as a new avenue for growth. But Pyongyang's continued nuclear and missile development has put pressure on Beijing to cooperate with the stricter international sanctions.