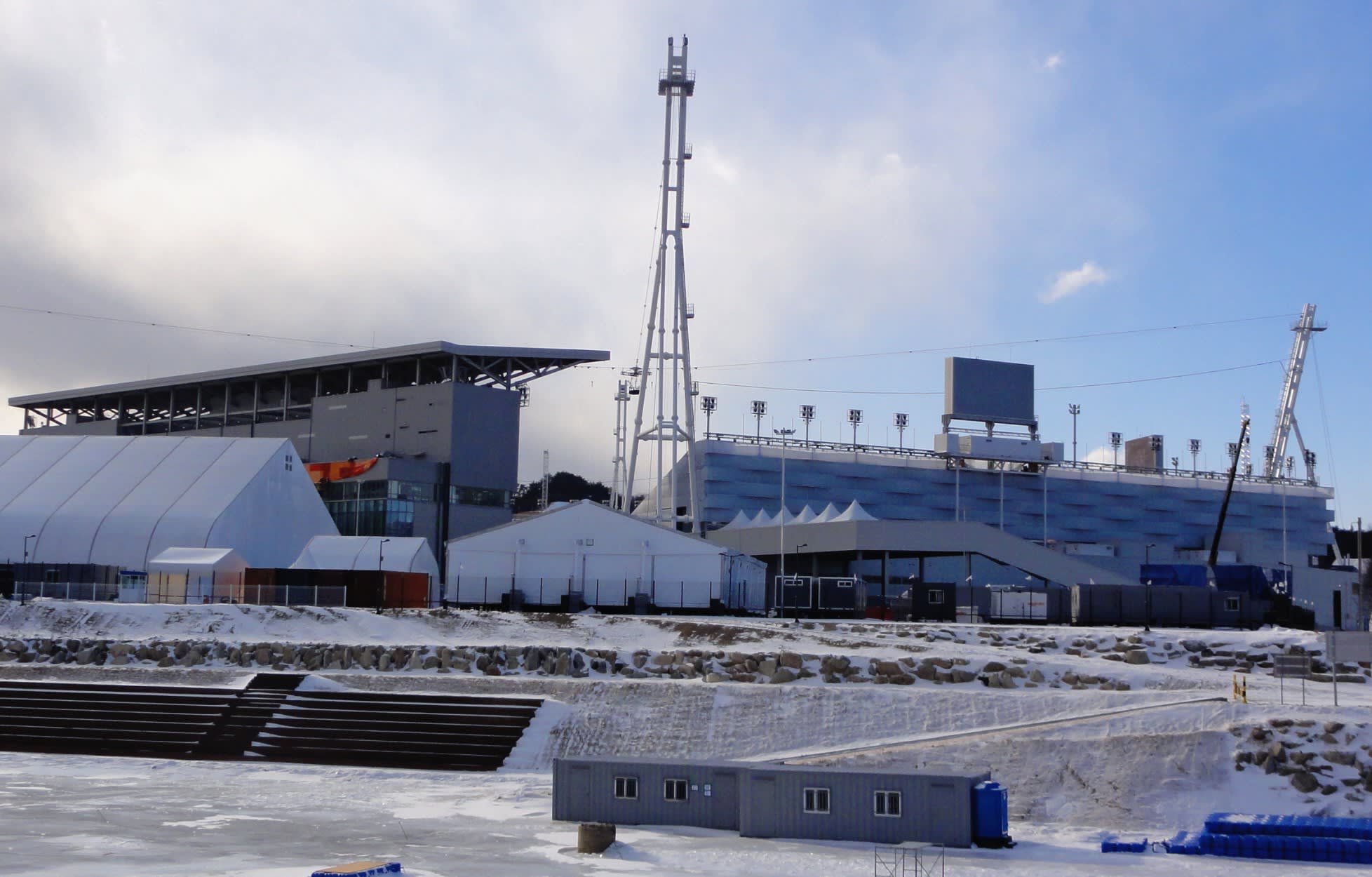 Preparations for the Winter Olympics are underway near the main stadium in Pyeongchang on Jan. 10.
North Korea Crisis

PYEONGCHANG, South Korea -- Plans to bring a North Korean team to the Winter Olympics here have run into a problem: Providing financial or other forms of support to the North could put the South in violation of international sanctions.

Both sides agreed Tuesday, in the first such bilateral talks in around two years, that Pyongyang would send athletes, a high-level delegation, an Olympic Committee delegation, a cheering squad, a cultural performance troupe and others to February's games.

People in Pyeongchang welcomed the increased attention. The South Korean government hopes that the move will help improve cross-border relations and is considering shouldering the cost of lodging the Northern retinue. But United Nations and other sanctions raise a host of logistical barriers.

A visit Wednesday to snowy Pyeongchang, in the northeastern province of Gangwon, revealed support for the idea of the North at the games.

"Absolutely, I want the North Korean athletes and their support staff to come," said a middle-aged woman who runs a Chinese eatery close to Jinbu Station, where buses will ferry spectators to and from the main stadium.

She called the deals reached Tuesday "very welcome" and said that "as people sharing an ethnic background, we have to get along."

The proprietor of a nearby grilled-meat restaurant reported that reservations during the games, from Feb. 9 to Feb. 25, "have risen 20%" amid the increasingly harmonious mood between the Koreas since the New Year. "If the Olympics thrive, more tourists come and revenue rises," the mid-40s man said.

Olympic fervor has been middling, even here in the host country. As of Jan. 3, about a month before opening day, about a third of admissions tickets remained unsold. There are hopes that as a participant, North Korea will steer clear of such provocations as nuclear and missile testing, leading to more spectators.

South Korea said in Tuesday's joint press statement on the bilateral talks that it would "provide necessary conveniences" to its neighbor's Olympic visitors. This was generally taken to mean that the South was prepared to provide monetary support to ensure the North's participation goes smoothly.

When South Korea has hosted the North at international competitions, it has generally covered lodging costs via a so-called inter-Korean cooperation fund managed by the Ministry of Unification. But doing so could run afoul of U.N. Security Council sanctions forbidding countries from supplying the North with bulk cash.

Such concerns have been raised in the past, but previous progressive governments have taken the view that putting up the Northern visitors did not amount to an infraction. But given the present strain surrounding the Korean Peninsula, that reasoning may not pass muster internationally.

North Korea is expected to send hundreds of people to Pyeongchang in all. If it seeks the same treatment it has enjoyed before, the South could be caught in a bind.

Bringing the Northern delegation into the country presents another problem. For the South to prepare aircraft or ships for the officials could be seen as violating U.N. sanctions forbidding the lending of such craft to the North. In addition, the South has unilaterally banned vessels from entering for a year after they make port in North Korea. The U.S. has also imposed sanctions on the North's flag carrier, Air Koryo, so using Northern air routes would be difficult.

That leaves land routes. But crossing the military demarcation line and the roughly 4km demilitarized zone would require Southern and Northern military authorities to settle in advance such details as schedules and personnel lists -- a time-consuming process.

Some high-ranking Northern officials are also rumored to be taking part, but such officials are by and large targets of U.N. and South Korean financial sanctions. Allowing them in could call the efficacy of those measures into question.

Furthermore, lodgings near the Olympic site have been booked solid since two years ago with people connected to the games, according to a hotel near Jinbu Station. At the 2002 Asian Games in South Korea's southern port city of Busan, a large ship moored in the harbor served as North Korea's lodging. This time, a former Hyundai group hotel north of the border may serve as home base, some predict.

"Should sanctions become a hindrance, [the South] will cooperate closely with the U.N. and the international community," a source affiliated with the Ministry of Foreign Affairs said Tuesday. This apparently left the door open to paying the North's bills. But the U.S. remains unbent on demanding compliance with sanctions. Attention is focused on the direction of working-level talks soon to begin between the two Koreas.

The online edition of the Rodong Sinmun, the mouthpiece of the North's Workers' Party of Korea, called Thursday on South Korea to cease all military activities conducted with foreign powers -- alluding to the U.S. -- in hostility toward its own race. The South should respond to the North's sincere efforts toward easing tensions, it urged.

The U.S. and South Korea have already agreed to put off joint drills during the Olympics as long as the North refrains from provocations. Pyongyang's criticism apparently aimed to act as a check on considerations of holding exercises after the games are over.