Diversity strengthens Japan on and off the rugby pitch 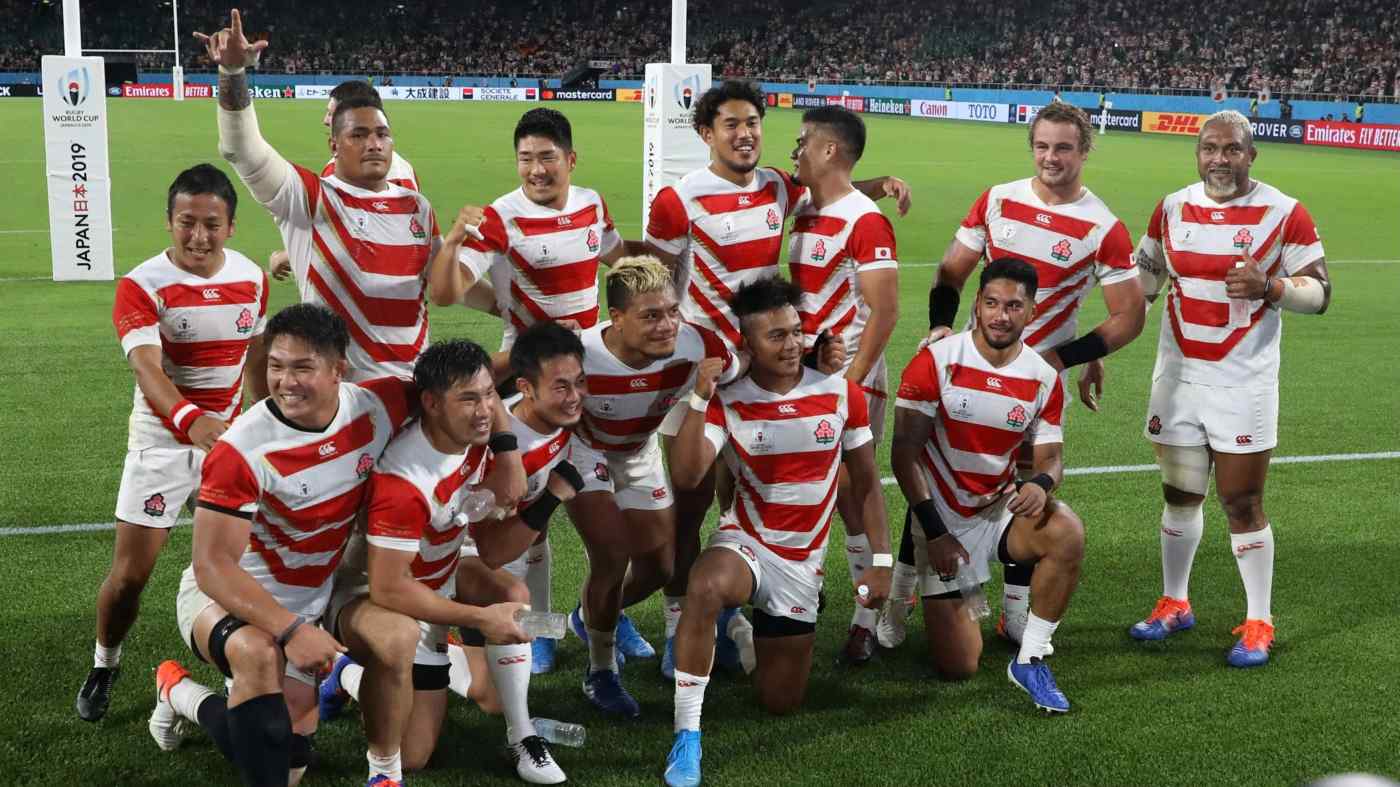 TOKYO -- At a luxury hotel in Kyushu, a pair of sonorous voices singing "Kimigayo," the Japanese national anthem, echoed through the hallway.

Two members of Japan's national rugby team -- 30-year-old Pieter Labuschagne of South Africa and 26-year-old James Moore of Australia -- were struggling with the Japanese lyrics, which come from a poem roughly 1,000 years old.

They were selected for the Japanese team after meeting the international eligibility rules set by the sport's governing body. A player who has lived in a country for 36 consecutive months can represent it at the international level.

Fifteen members of Japan's 31-man squad come from other nations. They represent an increasingly diverse Japan that has seen record numbers of foreign nationals come to the country to live and work. As they integrate into Japanese society, the diversity they bring represents an opportunity for Japan to shake off some of its moribund workplace customs.

Rugby's international competitions have always been relatively cosmopolitan affairs. Its eligibility rules date back to the British Empire, and were designed to allow British players from the colonies to represent the United Kingdom.

Japan's national team consists of athletes from seven different countries, more than any previous Japanese squad. Building esprit de corps in such a diverse group can be a challenge.

New Zealand-born captain Michael Leitch, a 30-year-old naturalized Japanese citizen, has taken on the role of history and culture instructor for the non-Japanese players. He made sure that everyone could sing the national anthem, and he organized quiz events to teach them about the country's history.

"In a sport like rugby, passion and patriotism are important," he said. "It's important to sing the national anthem to bring that passion out."

Fumiaki Tanaka, 34, another team member, tries to make sure that the foreign-born players interact with their Japanese teammates. "If they learn more about Japanese culture," he said, "we can become even more united as a team." Foreign nationals are a growing presence off the rugby pitch as well. There were a record 1.46 million foreigners working in Japan in October 2018.

Many have put down roots. Derek Wessman, 40, has spent a total of 17 years in Japan since coming from the U.S. He owns a company in Tokyo that offers interpretation and consulting services. He is a member of his local neighborhood association, a volunteer firefighter and active in local politics.

He also heads the organizing committee for the local festival, which typically attracts about 500,000 people. Here his nonnative thinking was an asset, he believes, as he identified safety risks that had previously gone unaddressed. "Being more systematic and open about solving those, stuff like that has changed," he said.

"I certainly think a diverse workforce of not only nationality, but also gender, of orientation, all of those things -- I think that diversity is definitely a strength to community and an organization," he said.

There is little doubt that diversity has helped Japan's national rugby team. One benefit it has brought is "highly accurate plays," according to former captain Masahiro Kunda.

Those accurate, detailed plays are possible thanks to explicit communication among players. Among Japanese, who share broadly similar cultural backgrounds, nonverbal cues are a part of communication, represented by the term a-un no kokyu, which refers to anticipating other people's actions and acting accordingly.

"When talking about how to handle breakdowns, for example, Japanese players can just say, 'Just like we learned in high school,'" said Kunda. "But actually, you can't work out details with an 'a-un no kokyu' approach. But with foreign players on the team, you have to spell out everything in detail. That's the team's strength."

After Japan lost a warm-up match to South Africa on Sept. 6, Japanese players said they came up short on "details," indicating the Japanese athletes appreciate the importance of clear communication more than ever before.

The Brave Blossoms, as the team is known, went on to win a massive upset over heavily favored Ireland on Sept. 28. Japan players celebrate after their Sept. 28 victory over Ireland.   © Reuters

Although the number of foreign nationals in Japan is rising faster than ever, they remain a small portion of the population. Attitudes toward people from overseas are changing, but there are no signs of major policy shifts on the horizon.

"Resources for the social safety net are limited, so immigration policy hasn't gained broad acceptance among Japanese people," said Tokai Tokyo's Muto. "I think Japan has to consider the opposition to immigrants that we saw in Europe, and the rise of populist governments and instability that came with it."

But those issues were not on the mind of Labuschagne, practicing Kimigayo in his hotel room. The South African anthem still stirs his feelings, he said, but he is also proud to sing Japan's anthem, and has no doubt that he made the right choice in joining the Japanese squad.