SHIZUOKA/TOKYO -- A historic win for Japan's Brave Blossoms against world No. 2 Ireland on Saturday capped off a week of excitement at the Rugby World Cup as local and foreign fans alike crowded into stadiums across Japan to witness the pinnacle of the sport.

In front of a crowd of 48,000 in the central Japan prefecture of Shizuoka, the Japanese team barged through a wall of green and clinched an upset, a shocker on par with its victory against South Africa in the 2015 World Cup. Jubilant fans jumped up and down throughout the stadium.

"Against the second ranked team in the world, the Japanese team stood their ground in terms of tackles and scrums," said Tatsushi Inoue, 25, a civil servant who came to watch the match with his father. "I was moved by their courage."

The Brave Blossoms received a nod of approval from Irish supporters too. "The Japanese team kept playing surprisingly well. I was very impressed," said Keith Griffin, 48, a supporter who made the trip from Dublin.

Prime Minister Shinzo Abe joined in the celebration, posting on Instagram shortly after the victory. "Big win for teamwork! Thank you for this tremendously exciting victory," he wrote. 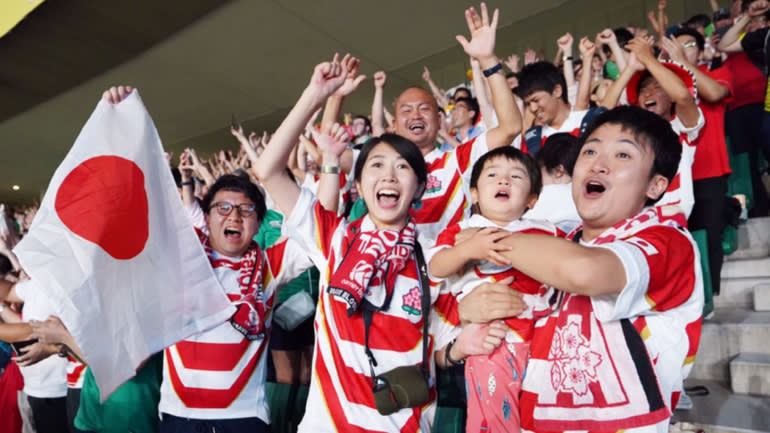 Flag in hand, fans rejoice over Japan's win against Ireland on Sept. 28. (Photo by Akira Kodaka)

With the team within reach of the knockout stages for the first time in history, rugby fever in Japan is set to reach unprecedented heights.

An early victory for the hosts set the tone for a week of excitement. On Sept. 20, the tournament's opening day, more than 45,700 spectators in the Tokyo Stadium stands watched Japan trounce Russia 30-10, scoring four tries. Japan rises to rugby's world No.8 -- The match in pictures

"It was a relief, because whether the host country wins or loses affects the mood of the whole tournament," a source involved with the tournament said.

In the northeastern Japanese city of Kamaishi, a five-hour train ride from the capital, about 14,000 fans crammed into the newly built Kamaishi Recovery Memorial Stadium for the Fiji-Uruguay match on Wednesday. Cheers erupted from the stands as 19th-ranked Uruguay upset No. 10 Fiji in a closely fought game.

The high-capacity International Stadium Yokohama hosted clashes between rugby powerhouses over the weekend -- New Zealand vs. South Africa on Sept. 21 and Ireland vs. Scotland on Sept. 22 -- with more than 60,000 people at each match. Enthusiastic Canada fans pose at the team's match against Italy in Shizuoka on Sept. 26. (Photo by Shinya Sawai)

Nearly all -- 97% -- of the 1.8 million tickets prepared for the tournament had been sold as of Friday, according to the organizing committee.

"There have been more buyers who aren't rugby fans than we expected, thanks to steady advertising campaigns in host cities and elsewhere," an insider said.

In Sapporo, last week's Australia-Fiji match and the England-Tonga match brought so many people that the streets were "flooded" with foreign tourists, an official involved in the city's games said, adding that "it was like we were overseas." England fans show off a flag on Sept. 26, when the team played against the U.S. in Kobe.

As many as 500 foreigners congregated at St. John's Wood, an English-style pub in the northern city, creating a raucous atmosphere as fans put their arms around one another's shoulders and sang. The bar stocked 10 times the usual amount of beer yet still ran out.

"We had two and a half times our usual weekend sales, the most since we opened," the store manager said with a smile.

The committee has estimated the economic impact of the event, which runs through Nov. 2, at 430 billion yen ($4 billion). 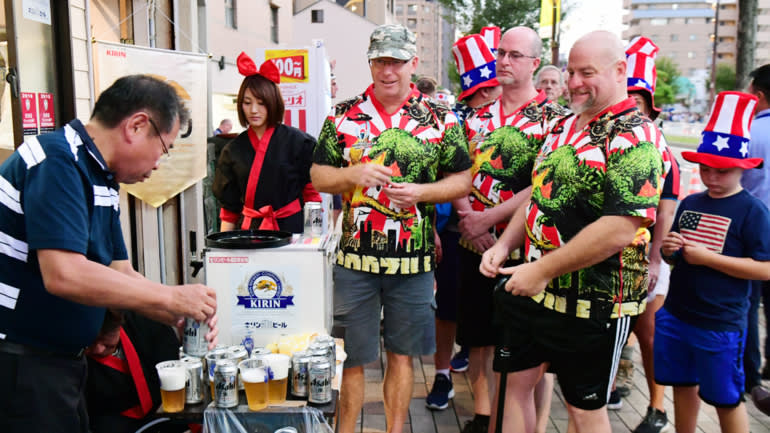 Canadian and U.S. visitors stop for beer on the way to a match in Kobe. (Photo by Tomoki Mera)