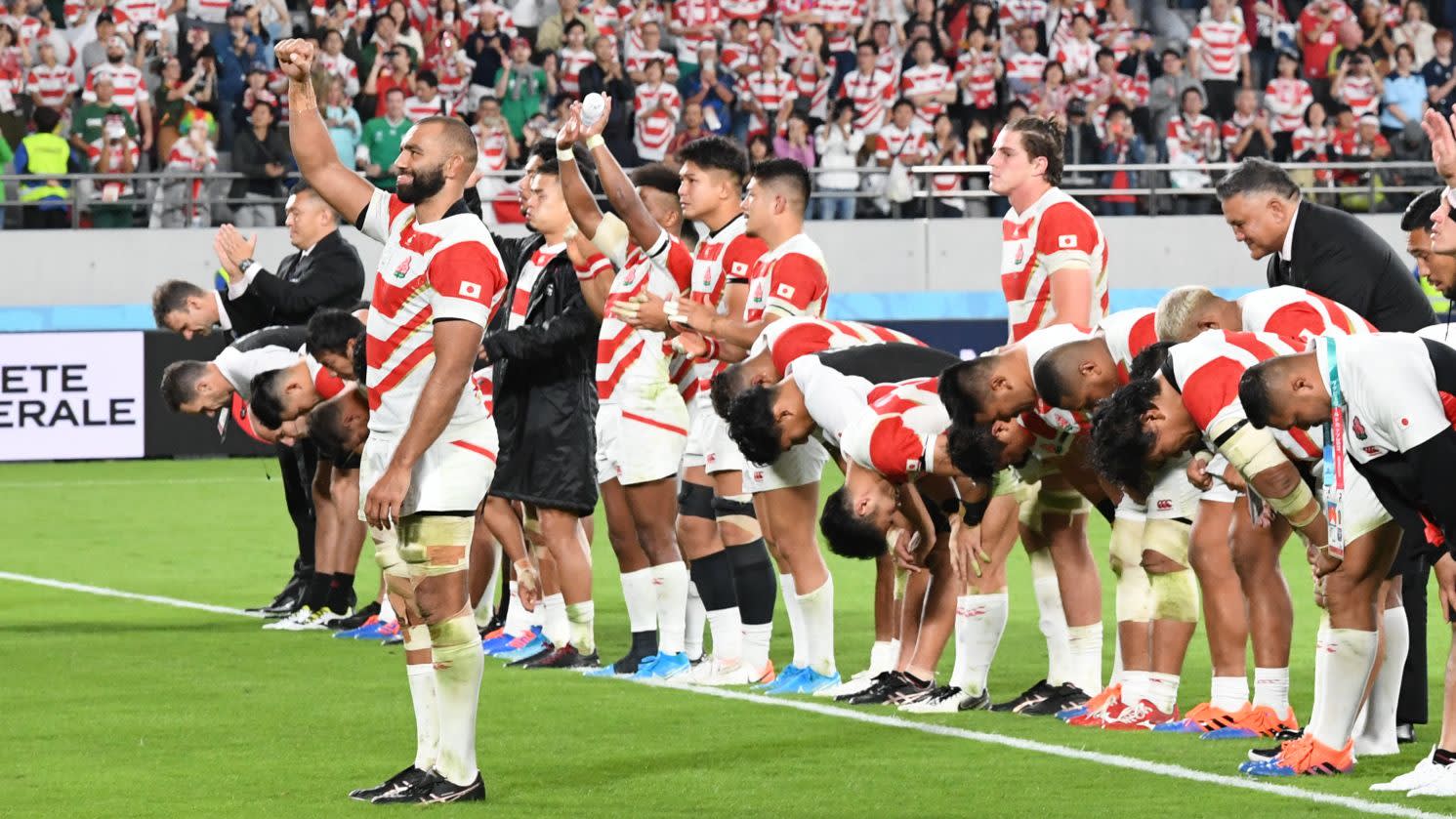 TOKYO -- With the Rugby World Cup in Japan drawing the attention of rugby fans across the globe, interest has been boosted by the host team's unexpected victories in the pool stage, with around 99% of available tickets already sold out.

While the tournament saw three matches canceled due to Typhoon Hagibis last weekend, it moved to the knockout stage on Saturday, with the remaining two weeks set to attract an even bigger global audience. South Africa defeated Japan 26-3 in a quarterfinal match on Sunday, ending the host's dream run.

The tournament has so far seen more than 1.8 million tickets sold out of 1.82 million available, with the 37 matches during the pool stage attracting total stadium audiences of more than 1.28 million, according to the Rugby World Cup 2019 Organizing Committee. The Japan-Scotland game on Oct. 13 drew the largest crowd, with 67,666 in attendance.

Organizers had to cancel group games between France and England, New Zealand and Italy, as well as Canada and Namibia that were scheduled for last weekend, over safety threats from the biggest typhoon of 2019. Hagibis resulted in the deaths of nearly 80 people in Japan. This was the first time that matches have been canceled since the tournament's debut in 1987.

Despite this setback, public interest in rugby keeps growing. Although the last World Cup held in England in 2015 saw total ticket sales of nearly 2.5 million, thanks to the larger capacity of stadiums compared to those in Japan, "social media has been widely used this time," a committee spokesperson said. The official beer of the 2019 Rugby World Cup, Heineken, is hoping for a 70% sales bump during the tournament, which runs from Sept. 20 to Nov. 2. (Photo by Toshiki Sasazu)

The amount of time spent viewing videos on the tournament's official YouTube page over the first 10 days of the competition had already surpassed the total for the last tournament. A video tweeted after the Japan-Ireland match on Sept. 28, when the host won a historic victory, was played 4.1 million times.

Photos of the Canadian team, whose match last weekend was canceled, helping with cleanup efforts in the typhoon-hit northern city of Kamaishi have been retweeted 130,000 times and spread among 13 million people.

Overseas visitors coming to Japan to watch the World Cup spend more than twice as much as tourists from Asia, according to a survey by Nikkei. They stay longer in Japan, as the rugby tournament lasts for several weeks, and they also spend more on accommodations per night.

Among 59 respondents to the Nikkei survey who visited Kobe to watch the England-U.S. game on Sept. 26, 70% were from these two countries. Their budget for spending in Japan, including on accommodations and food and drinks, averaged 320,000 to 410,000 yen ($3,000 to $3,800) per person. According to the Japan Tourism Agency and other sources, visitors to Japan as a whole spent an average of 153,000 yen per person in 2018, with those from 11 Asian countries and regions spending only 150,000 yen on average.

Guided tours in Japan are also popular among rugby fans, who tend to move around the country to see matches featuring their favorite teams at the 12 venues over the 44-day tournament. Many bookings for Tokyo-based private tour operator Otomo are being made from the U.K. and Australia, a company spokesperson said.

Japan's team won all four of its Pool A matches to top its group, securing victories over top-tier nations Ireland and Scotland, in a record performance for the country in the knockout stage and surprising audiences abroad as well as back home.

Of the 200,000 Brave Blossoms jerseys made, nearly all sold out ahead of the quarterfinal match with South Africa, according to a spokesperson for clothing manufacturer Canterbury of New Zealand Japan. "Not only Japanese but many foreign fans buy them, as Japan is playing so well," he said.