SYDNEY -- Amid a sense that the post-1945 world strategic order is being shaken, governments across the Asia-Pacific region are building up defense forces and industrial back-up for possible future conflict, while struggling to cope with asymmetric challenges that are happening already -- through "hybrid" military-civilian activity and cyberattack. Thailand, the U.S., and five other main participants, topped the list of 28 nations involved in Cobra Gold. (Photo by Shinya Sawai)

New threat perceptions as well as forms of weaponry are among the issues being discussed by defense planners and analysts from key countries who have gathered in Singapore for the annual Shangri-La Dialogue. The international security forum organized by the U.K.-based think tank International Institute for Strategic Studies runs through Saturday.

The growing sense of foreboding was clear in a report in January by the U.S. National Intelligence Council, amid warnings from pundits outside government like former U.S. Secretary of State Henry Kissinger and U.S. political scientist Francis Fukuyama.

"The next five years will see rising tensions within and between countries," the NIC said. "Global growth will slow, just as increasingly complex global challenges impend. An ever-widening range of states, organizations, and empowered individuals will shape geopolitics. For better and worse, the emerging global landscape is drawing to a close an era of American dominance following the Cold War. So, too, perhaps is the rules-based international order that emerged after World War II."

Asia is where this landscape is seen changing most dramatically. Its nations spent a total $367.7 billion on defense in 2016, continuing real growth of 5% to 6% over the last five years, with China accounting for nearly 40% of the total, far ahead of the next big spenders -- India, Japan, South Korea, Australia and Singapore, according to the latest figures from IISS.

With a rising emphasis on naval and air power, regional armed forces have been ordering submarines, anti-air destroyers, sub-hunting frigates and helicopter carriers for their navies, and fifth-generation fighters, patrol planes and drones for their air wings. China and India, so far the only regional operators of fixed-wing aircraft-carriers aside from the U.S. Navy, were both building new carriers in 2016.

In December, the Chinese navy sent its carrier Liaoning and escort vessels out into the Western Pacific beyond Taiwan for the first time, followed by blue-water excursions into the Pacific and Indian Oceans in February and March, involving navy task forces and long-range bombers.

Over the early months of this year, tensions soared on the Korean Peninsula as North Korean leader Kim Jong-un pursued nuclear strike capability with missile tests and preparations for a sixth nuclear explosion, and newly installed U.S. President Donald Trump declared he was putting "all options" on the table in response.

In both theaters, anxieties eased incrementally in May. Trump had made it clear by then that his immediate post-election phone call with Taiwanese President Tsai Ing-wen did not signal a change from Washington's longstanding "One China" policy. On the issue of North Korea, his officials clarified that the military stalemate would continue, with the onus placed on China to squeeze Pyongyang by imposing sanctions. After a pause in both Chinese island building and U.S. Navy freedom-of-navigation operations, it was back to the new normal later in May, with a U.S. destroyer sailing within the 12-nautical mile territorial limit claimed by Beijing around its artificial island on Mischief Reef. Then on Thursday two U.S. carrier groups joined Japanese naval and air units for three days of combat exercises in the Sea of Japan, in a pointed warning to North Korea.

Symbolic shows of force in the South and East China Seas demonstrated the challenges of "hybrid warfare" to conventional militaries. "In constructing artificial islands in the South China Sea and dispatching flotillas of fishing boats into the waters around the Diaoyu/Senkaku Islands, Beijing is employing a variety of measures to underscore its territorial claims, while not crossing the line into open hostility," said London's International Institute for Strategic Studies in its latest Military Balance survey.

Washington is weighing how to respond. "Although taking place below the threshold of direct military confrontation, China's assertiveness frequently involves coercive elements that put at risk existing rules and norms; physical control of disputed waters and territory; and the credibility of U.S. security commitments," the Center for Strategic and International Studies said. "Regional leaders have expressed increasing alarm about such 'gray zone' coercion. Yet, the U.S. and its allies and partners have struggled to develop effective counters."

China meanwhile is taking action to improve its electronic and cyber defenses. In Chinese President Xi Jinping's recent military reorganization, the People's Liberation Army created a new body called the Strategic Support Force, which includes all forces engaged in space, electronic and network warfare. The aim is to create "dominance" in what are called "informationized local wars."

The demands of both conventional and IT war capabilities are reaching back into national industries, forcing new alliances and a search for innovative talent. As well as capturing as much as possible of domestic defense spending and building exports, the aim is to find "game-changing" technologies to stay ahead. 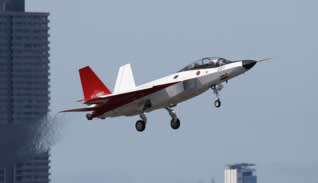 Australia and India are investing heavily in local defense industries, at the risk of cost escalation and late deliveries. In Taiwan's unique case, the reluctance of most arms-producing countries to offend China has forced costly investment decisions. With only two veteran U.S. submarines in operation, and no existing maker of conventional subs willing to sell, it has opened a new development center at the China Shipbuilding Corp. yards in Kaohsiung to design and supply six to eight new submarines.

In Japan, the heavy industry arms of the Mitsubishi and Kawasaki groups are building up marketing skills abroad, with Kawasaki Heavy's P-1 maritime patrol aircraft emerging as a rival to Boeing's P-8 for fleet updates such as New Zealand's Lockheed P-3 replacement. Mitsubishi Heavy is flight testing its prototype fifth-generation fighter, the X-2. 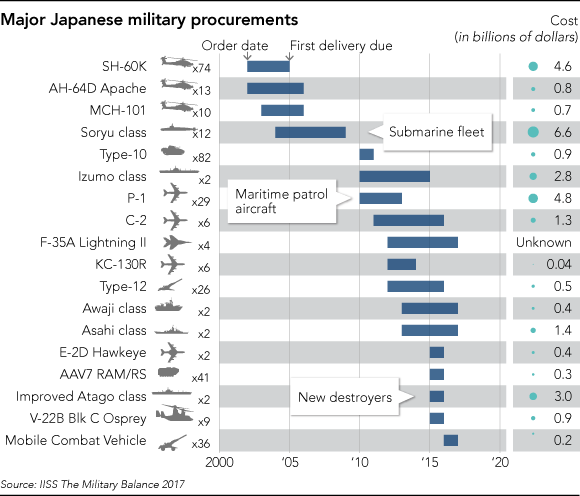 China has regrouped state-owned defense industries into stronger combines, and allowed them to tap its stock markets for capital. The aim is to catch up with the West and Russia in sectors of weakness, such as advanced aero-engines, and develop leapfrogging technology in areas such as quantum communications, network and cyber security, smart manufacturing and robotics, deep space and deep-sea exploration, new materials and neuroscience.

China is also offering more conventional military equipment to all comers. The military-backed Thai government has ordered three conventional submarines from China. While in China recently, Philippine President Rodrigo Duterte went shopping with an offered $500 million line of credit from Beijing -- despite some of the companies he visited being under sanctions imposed by Manila's major ally, the U.S. All the while, China's intransigence on the South China Sea continued to loom as Manila's main external security problem.

The U.S. military-intelligence complex showed a lead in the field of high-tech startups. The Central Intelligence Agency created the venture capital firm In-Q-Tel, which has put money into startups in fields such as social media monitoring, satellite imagery and micro-power wireless sensors.

The Pentagon followed with its Defense Innovation Unit Experimental or DIUx, based in Silicon Valley, and the so-called Third Offset Strategy, which seeks to outwit opponents with technologies like unmanned vehicles and space networks that cannot be jammed or destroyed. Australia has taken the same approach with its new Defense Innovation Hub and Next Generation Technologies Fund.

The funds connect buttoned-down defense establishments with the creative talents found in the IT world, whose lifestyles might not get a security clearance for direct recruitment. "We need to be realistic," former U.S. Defense Secretary Ashton Carter told Wired magazine. "Some behaviors that in past times might have been predictive of instability or espionage or a propensity to be blackmailed are simply not in that category anymore."

However, the venture-capital market also opens a pathway for perhaps unwanted outsiders to join in and see the wares. In June last year Haiyin Capital, a venture fund linked to Chinese state-owned Everbright Group invested in Neurala, an artificial intelligence software firm with contracts from the National Aeronautics and Space Administration and the U.S. Air Force. Haiyin also invested in XCOR Aerospace, developing spacecraft and engines. Another Chinese fund, AGIC Capital, bought a controlling interest in an Italian robotics company.

"None of this investment activity is illegal," said Thom Dixon, a researcher at Sydney's Macquarie University. "But when complemented by illicit cyber intrusions and export control violations, it forms a concerning pattern."

While many security analysts are focusing on the build-up of military muscle across the region, the critical battle is underway for control of Asia's military nervous systems.