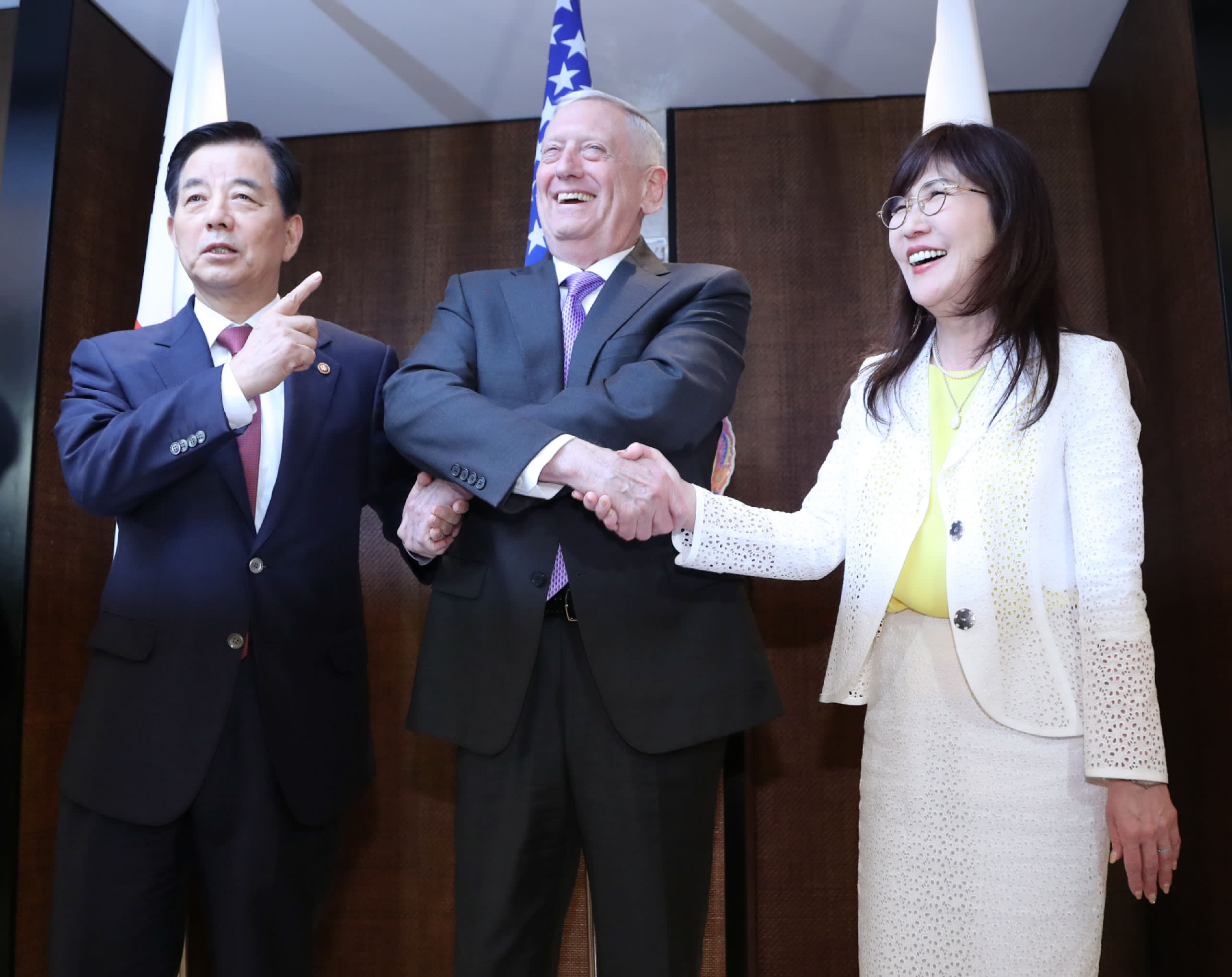 SINGAPORE -- Japan, South Korea and the U.S. on Saturday agreed to step up pressure on North Korea. The agreement came on the sidelines of the annual Shangri-La Dialogue.

The North is also known to be developing nuclear weapons, hoping to fit one on a missile, though it has not conducted a nuclear test since last year.

In a joint statement, the Japanese, South Korean and American defense chiefs said they recognize North Korea poses an immediate threat to the peace and security of the region as well as to the world.

The statement demands that North Korea abandon its nuclear and missile development program in a complete and irreversible manner. It also calls on North Korea to observe U.N. Security Council resolutions regarding its weapons programs.

The three defense chiefs also took up other matters. Regarding China's aggressive moves in the East and South China seas, the statement says freedom of navigation and overflight must be guaranteed and that differences cropping up in these areas be resolved peacefully.

A series of meetings took place among the Dialogue attendees. In another, Inada sat down with Mattis and Marise Payne, Australia's defense minister. During this meeting, too, the three confirmed that their countries will cooperate in regard to the North Korea matter.

In a joint statement after this meeting, Inada, Mattis and Payne expressed strong opposition to unilateral, high-handed behavior that tries to change the status quo and increases tensions in the region. The not-so-veiled comment toward China is in regard to the country's island building in the South China Sea as well as its many maritime disputes in the area.

Inada also had a private talk with Mattis. The two confirmed that Japan and the U.S. will step up pressure on North Korea, saying they cannot tolerate Pyongyang's provocations, which threaten Northeast Asia's peace and security.

The two ministers also said they share the view that joint military training between Japan's Self-Defense Forces and the U.S. Navy in the Sea of Japan has strengthened the deterrence that the Japan-U.S. alliance projects. They also confirmed that the two countries will cooperate on South China Sea matters.

After the meeting, Inada told reporters both she and Mattis recognize that security matters have become aggravated of late -- and that Japan and the U.S. agree on how the situation should be handled going forward.

They also reconfirmed that Article 5 of the Japan-U.S. Security Treaty applies to the Senkaku Islands, Okinawa Prefecture, which sit in the East China Sea. And they reiterated their intention to go forward with relocating the operations of U.S. Marine Corps Air Station Futenma, on the main island of Okinawa, to the Henoko district of the same island.