Airbnb claws its way back in Japan following 2018 listings collapse An Airbnb hotel in Osaka. The company now has about 41,000 listings in Japan, just under 70% of what it had at its peak. (Photo by Hiroyuki Yamamoto)
ERI SUGIURA, Nikkei staff writerFebruary 28, 2019 06:35 JST | Japan
CopyCopied

TOKYO -- The number of Airbnb listings in Japan has recovered to roughly two-thirds of what it was before being decimated by new regulations in June, which forced tens of thousands of accommodations to be taken off the site.

But the world's largest home-sharing company continues to face headwinds in the country, and rapidly growing markets in other parts of Asia offer a seemingly more straightforward path to growth.

"We went down after the law, but since then it came up at a relatively fast pace. Being compliant has been a catalyst for our growth," said Chris Lehane, head of global policy and public affairs at Airbnb at a press conference this week. He also announced that the platform now had 41,000 listings in Japan, a little less than 70% of what it had at its peak.

The law, which came into effect in June, introduced an onerous registration process for hosts, and the Japan Travel Agency demanded platforms delete accommodations that did not comply. That amounted to 80% of the number of Airbnb's listings at its peak.

Moreover, thousands of bookings had to be cancelled, causing widespread confusion as tourists were forced to make other plans at the last minute.

However, the 41,000 figure mentioned by Lehane, the number as of Feb.16,  includes 5,400 rooms in hotels, guesthouses and traditional Japanese inns, categories that Airbnb has sought to expand following the introduction of the law.

"2018 was an adjustment year, so we will probably see the number of guests back to the 2017-level this year," said another Airbnb executive, showing confidence in Japan's growing numbers of inbound tourists. The country welcomed over 30 million visitors in 2018. 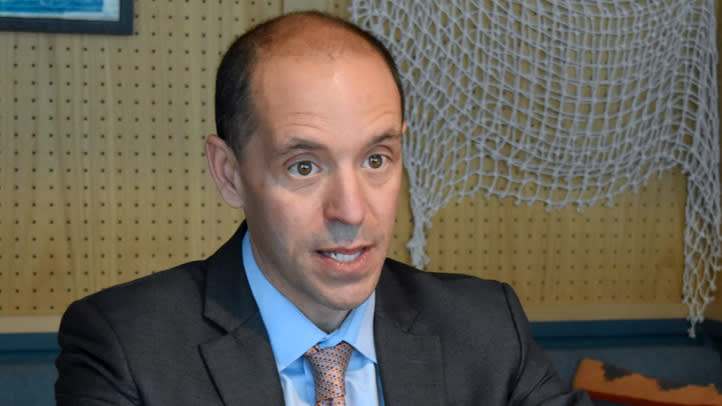 Chris Lehane, head of global policy and public affairs at Airbnb, said the company's conversations with the Japanese government were now focused on "going forward." (Photo by Hiroki Obayashi)

In order to cope with the changes, the company invested $30 million to help hosts with the registration process, organizing recruiting events in 60 cities and partnering with 74 businesses, including convenience stores, airlines and banks.

The company also established a fund of $10 million to compensate people for booking fees they had already paid.

In contrast, Airbnb is thriving elsewhere in Asia, supported by a growing trend of domestic travel. According to a company report, listings in 2018 were up 52% on the previous year in India and 106% in China. The number of domestic guest arrivals had increased by more than three-quarters in the former and tripled in the latter.

These developments have been buoyed by "continuing popularity with millennials and younger consumers," the report said.

There are over 410 million millennials in India and more than 400 million in China -- both figures that comfortably exceed the total population of the U.S. "India and China will be amongst the biggest markets in the world by 2030," said Lehane. And, while listings appear to be recovering, Airbnb faces additional difficulties in the Japanese market.

"Rooms on Airbnb were up to 50 euros per night," said a 23-year-old French tourist looking for somewhere to stay in Tokyo with a friend in April. Eventually, she decided to spend part of her three-week stay in a hotel and part with an acquaintance.

According to data analytics company Metro Engines, the occupancy rate of lodgings listed on Airbnb remains below what it was before the implementation of the law.

The rate ranged from 0.5 to nearly 7 percentage points below year-before levels from July 2018 to January 2019.

Airbnb attributes the lower occupancy rate to its expansion into rural areas. In and around the capital, it pointed out, the rate in the latter half of 2018 was up 23% on the previous year.

Lehane told the Nikkei Asian Review that the company was determined to provide "access to a diversity of listings" in Japan.

The 2020 Tokyo Olympics will be an "enormous opportunity for the country to meet not only 40 million of foreign tourists [expected over the whole year] but to have an extended economic effect," bringing long-stay tourists to rural areas where Airbnb can play role, he said.

Despite last year's issues, Lehane insisted the company's relationship with the Japanese government was amicable.

"Our conversation with the government has stepped into a different nature," he said. In a previous interview with the Nikkei in June, he expressed being "puzzled" by the demand to delete existing bookings.

The government at that time was "pushing for us to respect legal structure," whereas now they are "talking about going forward," he said.