BEIJING -- Chinese bicycle-sharing app Ofo is expected to pull out of the Japanese market as it deals with financial distress at home.

Ofo informed the cities of Otsu and Wakayama earlier this month of its intention to end operations in Japan, Nikkei has learned. Otsu, which neighbors Kyoto, partnered with Ofo at the end of April to deploy 400 of the signature yellow share bikes, along with 66 proprietary bike docks.

But Ofo told Otsu on Oct. 17 that it intends to exit Japan at the end of the month. The company has reportedly not contacted city authorities since then. "We are currently ascertaining the facts of the matter," said an Otsu official.

Ofo was similarly opaque on Oct. 18 when it telephoned Wakayama, a city near Osaka, about plans to withdraw. When asked to clarify the timeline and other details, the Ofo representative promised to call back later after talking to the head office. Wakayama says it has yet to receive a response.

The city of Kitakyushu in southern Japan said it received the same notice from the startup. "We proposed that they continue the service, but the situation doesn't look good," said a Kitakyushu official. 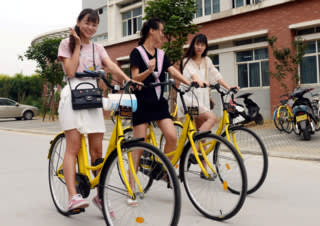 At its peak, Ofo's estimated ridership topped 200 million users across about 20 markets. The startup won funding from Chinese e-commerce leader Alibaba Group Holding, and its enterprise value touched $3 billion at one point.

Alibaba has invested $343 million in Ofo and holds a 12% stake, according to local media reports.

But in China, competition has intensified. Because piles of abandoned bikes have become a public nuisance, Ofo has had to relocate bikes at additional costs. Authorities have also ordered bike-sharing platforms to promptly refund security deposits to users, instead of pooling them as a source of funding.

Facing those changes, Ofo's finances appear to have deteriorated this year. In May, the company said it is scaling down its workforce to 8,000 from 12,000, according to local media reports. Ofo now operates out of smaller offices in Beijing. Ofo's operator, Dongxia Datong, has been sued for nonpayment of bills by bicycle suppliers and logistic support providers.

Ofo's corporate value has declined to about a third from when Alibaba invested, but an executive of a Chinese internet company said the fall will not greatly impact Alibaba's total revenues.

Bike sharing services have spread rapidly in China, coupled with smartphone payments, prompting both Ofo and Mobike to make forays overseas. But the companies have since decided to pull out of foreign markets due to cash-flow problems.

In China, market watchers expect the services will continue, given Chinese people's fondness for bike sharing.

Alibaba has a stake in another bike sharer, Hellobike, through finance unit Ant Financial. Alibaba reportedly has invested more than 10 billion yuan for a stake of about 30%, according to local media reports.

Since July, Ofo has shuttered unprofitable overseas businesses in places like the U.S., Germany, Spain, Australia and Israel, Chinese media reports say. Ofo's valuation evidently has fallen to $1 billion, though a number of domestic competitors have folded outright.