The 31 members include the world's three biggest automaker groups -- Volkswagen, Toyota Motor and the Franco-Japanese alliance of Renault, Nissan Motor and Mitsubishi Motors -- plus a joint venture of China's state-owned Dongfeng Motor and South Korea's Kia Motors. German groups Bosch and Continental will contribute on the parts front.

The alliance marks a step forward from the new-energy vehicle sharing platform Didi announced in February, which featured 12 partners but lacked such power players as Toyota and Volkswagen.

Artificial intelligence-based analysis of ride data from Didi's 450 million users will help provide a detailed understanding of the needs of people who rely on car sharing. 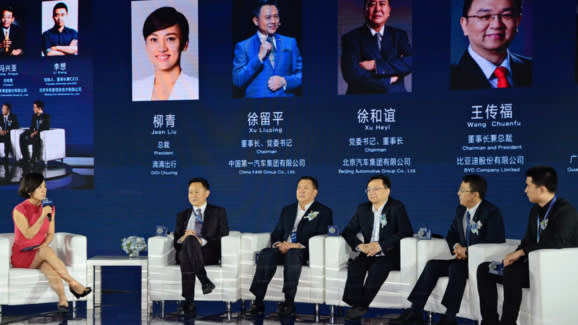 The alliance aims to provide everything needed for a user-friendly service, including insurance and maintenance on the "purpose-built" electric vehicle fleet. The goal is to have 1 million electric vehicles in use by 2020, and 10 million by 2028. Production costs are targeted at half the level of existing electric vehicles.

While many households in the U.S. and Europe have one or two cars, China's lower level of ownership is holding back its development, Didi CEO and founder Cheng Wei told reporters in Beijing on Tuesday. How China addresses that problem will be meaningful to the world, as India and other markets face similar issues, Cheng added.

Focusing on China at first, the D-Alliance will likely expand into other markets, such as those where Didi is already investing. The company sees the alliance helping to more than quadruple its current user count to about 2 billion people in 10 years' time.

Car ownership underpins a powerful global industry and has become a status symbol in markets worldwide, not least in China. "It's anybody's guess" whether Didi's effort will make car users out of buyers, said one auto industry analyst. "For now, we'll be watching the jointly developed vehicles."