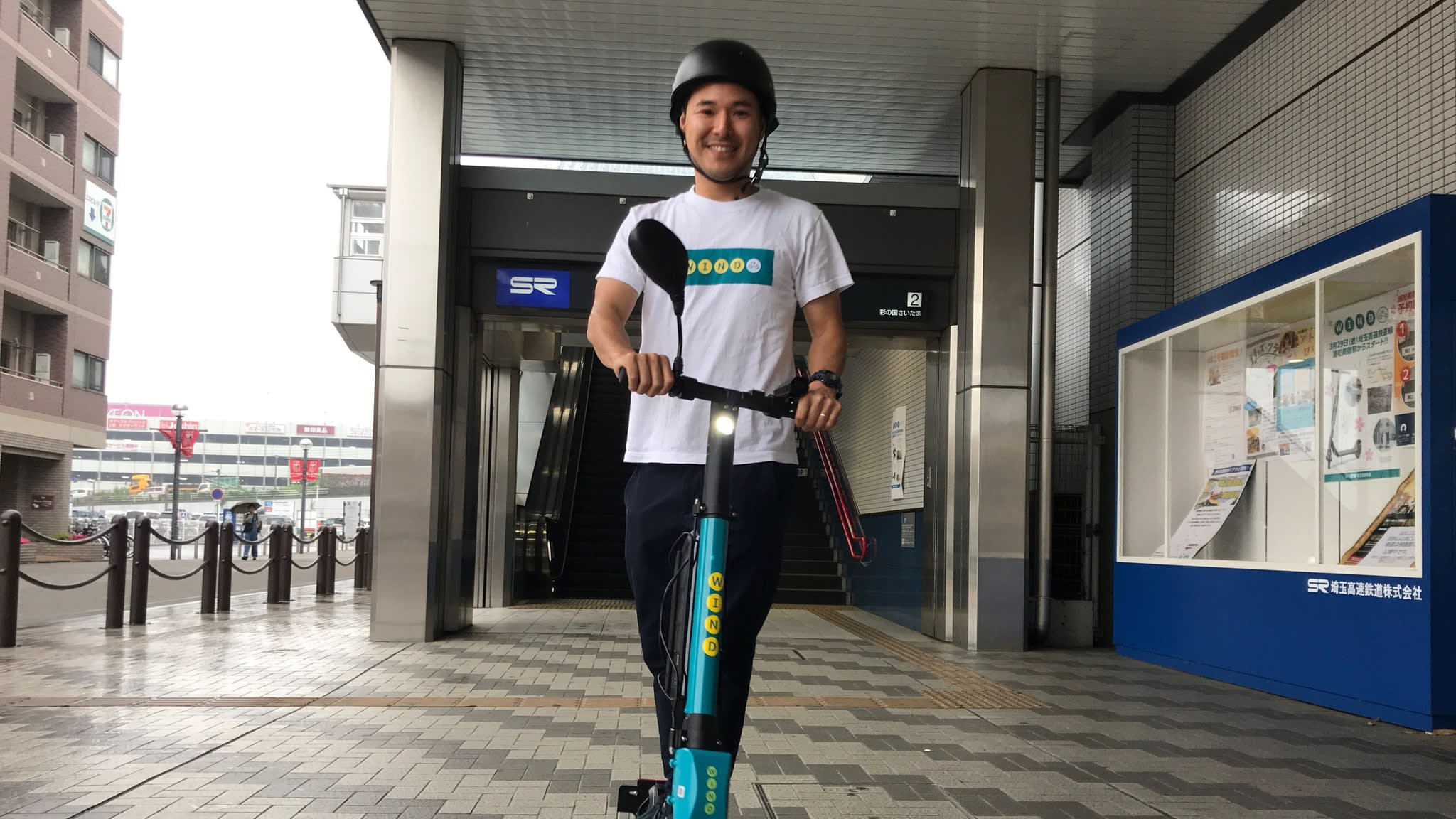 A rider uses a Wind Mobility electric scooter outside Urawa-misono train station in Saitama, the only place the devices are available in Japan. (Photo by Toshihide Takeda)

TOKYO -- E-scooters have zoomed into the spotlight around the world over the past two or three years. In the U.S., the trend has helped scooter-sharing startups such as Bird and Lime achieve unicorn status.

Now the compact conveyance has arrived in one corner of Japan: Urawa-misono Station in Saitama, a 50-minute underground train ride north of Tokyo.

Ten scooters are lined up at an eye-catching spot outside the ticket gate, where they can be unlocked with a smartphone app. Users can borrow helmets from the station before they ride off.

The rider puts one foot on the board and kicks off two or three times with the other, after which the scooter propels itself forward at up to 19 kph. It is controlled with an accelerator on the right handlebar and a brake on the left.

The e-scooters are provided by Wind Mobility Japan, the local arm of Berlin-based Wind Mobility, which operates in 17 mainly European cities. The service, which rolled out March 29, had just over 300 registered members at the end of May. About 10 e-scooters are parked by the ticket gate, where riders can also borrow helmets. (Photo by Toshihide Takeda)

It costs 100 yen (about $1) to unlock a scooter and 25 yen per minute thereafter, on par with rates overseas. Since rides last about half an hour on average, the company is considering giving riders the option to pay by the hour or the day. It also looks to add more scooter bases at other train stations and downtown.

Management consultancy McKinsey & Company estimates that the overall "shared micromobility" market -- which includes e-scooters, bike-sharing services and the like -- in the U.S., Europe and China could reach a total of $500 billion. Yet e-scooters have been the subject of much controversy overseas, where reckless driving and devices left lying on sidewalks have caused accidents and angered locals.

Germany and France are imposing tougher regulations on electric scooters, barring the vehicles from sidewalks, while some U.S. cities have outright banned e-scooters or imposed moratoriums on their use.

Wind's Japanese service has reportedly avoided such issues so far, with no accidents or complaints from residents.

Wind had hoped to partner with railway operators but initially thought doing so might be too difficult. But Saitama Railway took a liking to the scooters at a demonstration event last November, and its support helped Wind get the service off the ground.

Saitama Railway already had the groundwork laid for such a partnership, according to the head of its corporate planning department. The company is actively seeking out new forms of transportation with an eye toward development along its train line to Tokyo, and it had already worked with the city government and police department on testing electric buses, for example. 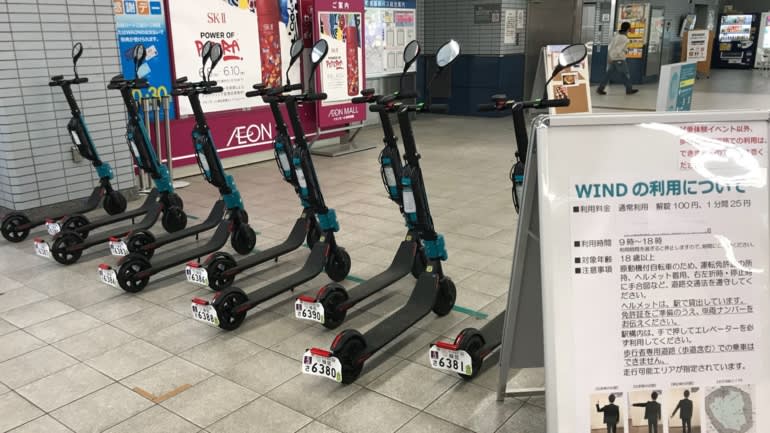 E-scooters are are treated as motorized bikes in Japan, meaning they must have license plates and side mirrors. (Photo by Toshihide Takeda)

The scooters at Urawa-misono are treated as motorized bicycles under Japanese traffic law, based on a 2002 notice from the National Police Agency. This means they must be equipped with license plates and side mirrors and require a driver's license to operate. They also have to be driven on the road alongside cars.

The same goes for any form of transportation with a battery, including other micromobility options such as unicycles. This policy has had unintended consequences, blocking seniors who have surrendered their licenses from using electric schooters  as an alternative to cars.

"The regulations should be in keeping with the reality of" how e-scooters are used, argues Daiki Okai, head of Luup, a Tokyo-based electric-scooter startup.

He contends that it is illogical to paint all motor-powered vehicles with the same brush "even if they can go only 10 kilometers an hour."

Okai is taking action to change this. In May, he partnered with AnyPay -- another scooter-sharing company planning tests in the city of Fukuoka -- and Yahoo Japan subsidiary Z Corp. to set up a group promoting micromobility solutions. The group will start by drawing up a self-regulatory framework for the industry this year. Wind e-scooters can be locked and unlocked via the company's app. (Photo by Toshihide Takeda)

The aim is to craft rules suited to Japan while avoiding a repeat of the backlash that e-scooters have faced abroad. The group will also look to expand tests to other interested cities.