JAKARTA -- Sales at Express Transindo Utama have plummeted as Indonesia's second-largest taxi operator struggles to contend with the emergence of ride-hailing services Go-Jek and Grab.

The figure for 2017 dropped to a third of its level in 2015, and earlier this year it emerged that the company had postponed bond-interest payments.

Express has a fleet of roughly 9,000 vehicles and commands roughly 15% of the country's market. It listed on the Indonesia Stock Exchange in 2012 with the ticker code "TAXI."

But technological disruption in the industry has now cast a shadow over the company's future.

"My daily earnings have fallen more than 40%," said one driver. Increasing numbers of customers are switching to Go-Jek and other ride-hailing services. The business has also suffered from a worsening reputation, with a lack of investment in its fleet having drawn complaints of "dirty cars" from customers.

The Indonesia Stock Exchange suspended trading of Express shares on June 25, citing a failure to pay interest on bonds issued in 2014. The taxi operator has made no official comment, but this is the second such suspension in under three months.

Demand for taxis has risen over the past decade in a country that suffers from a lack of public transportation infrastructure. In the past, taxi fares were often negotiated on the spot, but Express and market leader Blue Bird introduced meter-based systems and quickly became the largest taxi operators in the country.

The tide turned in 2015, when local ride-hailing startup Go-Jek began offering lower rates. In 2016, when smartphone penetration in the country topped 50%, ride-hailing became the most popular choice for Indonesians. 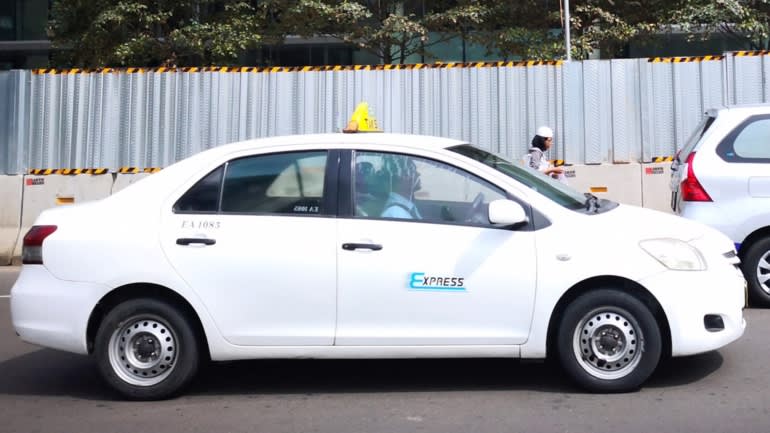 Express has a fleet of roughly 9,000 vehicles, but the company's sales have fallen dramatically in recent years.

In an attempt to embrace the digitization that has transformed the taxi industry, Express partnered with the world's largest ride-hailing provider Uber Technologies in December 2016. That plan fell apart, however, when Uber sold its Southeast Asia operations to Singapore-based Grab earlier this year. Blue Bird, by contrast, partnered with Go-Jek and was able to keep turning a small profit.

Despite a restructuring of manpower and other assets, Express posted losses for the first three months of this year.