Grab to bulk up tech team to build competitive muscle

Ride-hailer pushes 'superapp' strategy with veterans from US and India SINGAPORE -- Southeast Asia's largest ride-hailing operator Grab is planning to double the number of engineers to nearly 2,000 in the 12 months to the end of this year, as it rushes to increase its technology firepower amid intensifying competition from regional peers.

Theo Vassilakis, Grab's chief technology officer, told the Nikkei Asian Review in a recent interview that the Singaporean start-up, founded in 2012, had reached a point where it needed to scale up its technological talent to support its growing businesses. Grab will hire even more next year, he said.

Last month the company also poached Mark Porter, an experienced database engineer and executive at Amazon.com of the U.S., to oversee technologies in its main ride-hailing businesses. "As our core business got to a certain point, and then some of the other businesses are also growing, we wanted a person to focus on each of the major businesses," Vassilakis said.

The region's most valuable startup now operates in eight countries in Southeast Asia. In the last year or two, the company has been aggressively expanding beyond transport to food delivery and e-payments. The company's drive to become what it calls an "everyday superapp" accelerated after this year Grab bought Uber Technologies' regional business, leaving it the dominant player in the region.

Vassilakis built his engineering career at Microsoft in the U.S. before joining Grab in 2017. Soon after Vassilakis joined, the company hired Vikas Agrawal, a former engineering executive at Indian mobile payment company Paytm.

Vassilakis said Porter and Agrawal were necessary for Grab's expansion as they had already experienced the "scaling cycle" that Grab will go through. 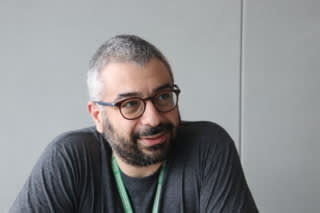 To develop better transport systems, as well as future talent, Grab earlier this year partnered with the National University of Singapore in artificial intelligence. Vassilakis said that Grab is also working on raising homegrown tech talent through internship programs with universities. Many companies entering such partnerships amid a global shortage of engineering talent.

All of these efforts come as regional competition is set to intensify, pressuring the regional giant to move fast. Indonesian rival Go-Jek in September launched a ride-hailing service in Vietnam, and it has plans to enter Thailand, Singapore and the Philippines. In Singapore, Go-Jek in late October started preregistration for drivers. Grab and Go-Jek compete in non-ride areas such as e-payments and online health care.

For Grab, sharpening its technological capabilities is also essential as local governments introduce new regulations. Grab provides governments with traffic congestion data so that local authorities can better plan the public transport system. This helps Grab to demonstrate its contribution to governments that might tend to favor to traditional transport.

Grab says it is the biggest homegrown tech company in the region and that it expects to become the first tech startup in Southeast Asia to reach annual revenue of $1 billion this year. It is valued at $11 billion, according to CB Insights.