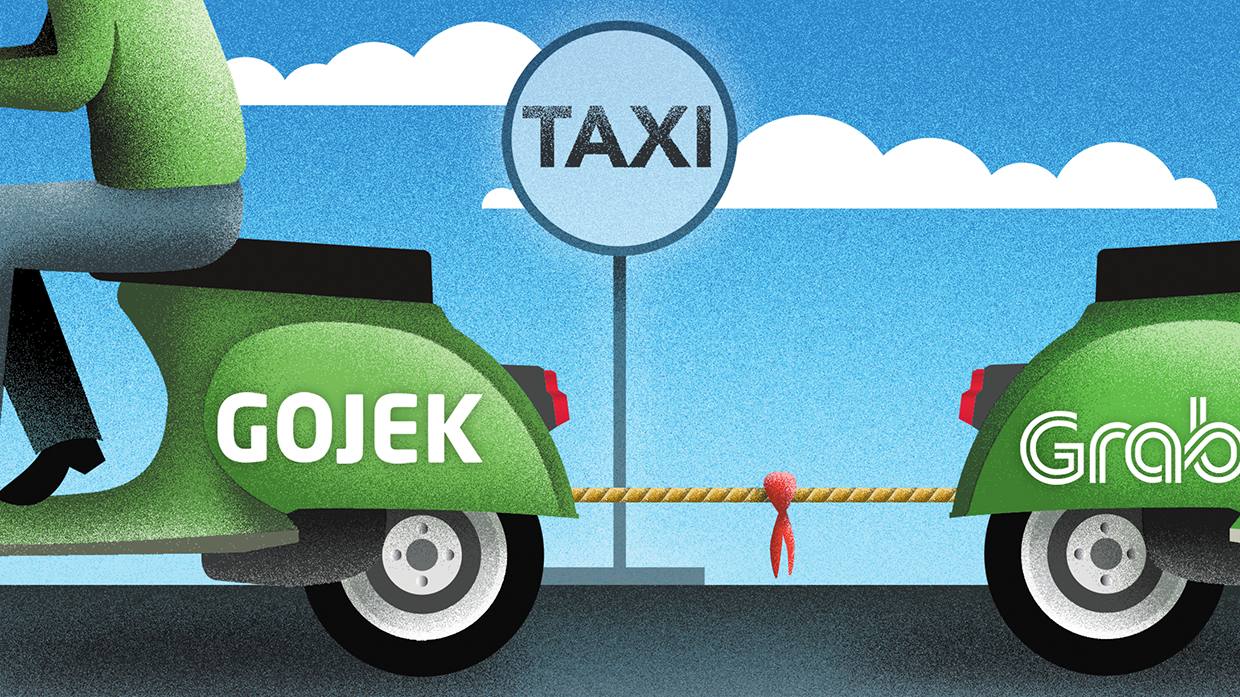 SINGAPORE/JAKARTA -- Southeast Asian ride-hailers Grab and Go-Jek have both topped 100 million app downloads. They have both drawn investments from some of the world's biggest companies, making them two of the region's most valuable startups. Even their CEOs both went to Harvard Business School.

Now, in 2019, they are going head-to-head with ambitious expansion plans across the region, not only in their core ride-hailing businesses but with offers of extra products and services to their transport clients.

Singapore-based Grab was founded in 2012 and has built a business spanning eight Southeast Asian markets, helped by the acquisition of the regional operations of U.S. ride-hailing pioneer Uber.

But Go-Jek is gaining ground fast. Founded in Indonesia in 2010, the company did not venture out of the country until last year, when it finally announced a $500 million investment in regional expansion. Within months it had rolled into Vietnam where it competes directly against Grab.

Go-Jek's more cautious approach to international growth has left it vulnerable to growing scrutiny of the ride-hailing industry by the region's regulators. In early January the Philippines blocked its entry on concerns over foreign ownership.

But services in Thailand were launched at the end of 2018, in a sign that being the underdog has not dented Go-Jek's ambitions. Now it is heading straight into the belly of the beast to challenge Grab on its home turf. Go-Jek launched a trial service for limited customers in Singapore in November. On Jan. 10, it made the service available to everyone.

"We are committed to bringing choice back to the ride-hailing market in the city-state, the hub for innovation and urban mobility in Southeast Asia," Go-Jek President Andre Soelistyo said in a statement on the company's move into the city-state. Go-Jek's strategy appears to include undercutting Grab's fares and poaching drivers. Go-Jek prices are 10% to 30% below Grab's. And drivers seem to like what they see: "I moved from Grab because Go-Jek gives better incentives for drivers," said one who made the switch in early January.

And like Grab, Go-Jek is looking to attract consumers and drivers not just with ride-hailing but also extra services, such as e-payments. It is stepping up its range of offerings in new markets. In Vietnam, Go-Jek has tied up with VietinBank to offer e-payments. It has also announced a "strategic partnership" with Singapore's DBS Group Holdings -- one of Southeast Asia's biggest lenders -- with an eye toward launching a similar service.

To support its expansion, Go-Jek has been courting big-name investors and partners. It is said to be finalizing a $2 billion funding round, backed by existing investors Google, Tencent Holdings and JD.com among others, which according to several reports will push up its valuation to around $9 billion.

If Grab is worried, it is not showing it. "We have competitors in all the countries we operate in, and small competitors have come and gone since we've been doing business for the last six years or so," an executive told reporters in December. "With Go-Jek's expansion, we see no difference."

"It may be very difficult to build market share in the face of a dominant competitor like Grab, unless... Go-Jek is willing to burn more money"

Industry observers say Go-Jek could need hefty resources if it is going to pose a significant threat to Grab in the city-state. "It may be very difficult to build market share in the face of a dominant competitor like Grab, unless the entrant, Go-Jek, is willing to burn more money," said Walter Theseira, a transport economist at Singapore University of Social Sciences.

"Go-Jek," he added, "requires a critical mass of drivers and commuters to provide a sustainable and high-quality service, and it's not clear if that can be developed without heavy subsidies."

Theseira noted that tie-ups with local taxi companies would be "an obvious way of building critical mass quickly."

Moreover, as a late mover, Go-Jek could be at a disadvantage in the region as a whole. Manila's decision to block Go-Jek from offering rides in the Philippines, where Grab arrived back in 2013, was a major setback for the Indonesian venture's plans to crack Grab's strongholds. Regulators determined that Go-Jek's affiliate Velox Technology Philippines did not comply with regulations limiting foreign ownership to 40%.

Go-Jek could still take another shot at the Philippine market by changing the affiliate's ownership structure. The company has already accepted limitations on ownership elsewhere. Its Vietnamese unit, Go-Viet, is more than 50% owned by local shareholders.

Nevertheless, Grab faces its own challenges in the Philippines. While its operational merger with Uber was approved last year, its virtual monopoly in the country remains under post-merger monitoring for a year. The Grab-Uber deal sent authorities in other countries scurrying, too, and prompted fines against the companies. Singapore hit them with a combined $9.5 million penalty for anti-competitive practices.

Grab is also facing a lawsuit in Vietnam by local taxi company Vinasun, which accused it of unfair business practices, according to local reports.

Still, the company is steamrolling forward and expanding its operations, partnerships and suite of services.

In Singapore, it recently added a service called GrabFamily that lets consumers call a car with a child seat for an extra fee. In Thailand, it announced a total of 1 million baht ($31,200) in scholarship grants for the children of its drivers, hoping to boost recruiting and retention. Moreover, Grab plans to hire 1,000 engineers in 2019 to capitalize on technological trends like artificial intelligence.

Online health care and remittances are among the new offerings Grab said it would roll out this year. On Jan. 16 it announced plans to set up a joint venture with China's ZhongAn Online P & C Insurance, an internet-based insurer, to offer financial products to Grab users and drivers.

Grab last year invested in Ovo, an Indonesian digital payment platform developed by local conglomerate Lippo Group. It also announced a deal with Thailand's Kasikornbank on payment services through its app in the country. Grab partnered with Malaysia's Malayan Banking in May and Vietnamese digital payment service MOCA in September as well.

Like Go-Jek, the group is looking for more funding. It is already valued at $11 billion, after Toyota Motor's $1 billion investment last June. It had planned to raise $3 billion from its Series H funding round but is now reportedly aiming for $5 billion, with the Japanese-Saudi SoftBank Vision Fund considering a further capital injection of $1.5 billion.

Grab and Go-Jek investors are attracted not only by the potential for expanding ride-hailing services into new geographical markets, but by both companies' plans to become indispensable "super apps," offering everything from transport and financial services to e-commerce and home delivery. A report by Cento Ventures showed that 83% of funding in the first half of 2018 in Southeast Asia went to only four companies, two of which were Grab and Go-Jek.

Intensifying competition and service diversification will require still more funding, however, raising the likelihood that the two rivals will pursue additional capital and business partnerships this year, suggest analysts.

Neither is daunted by the challenge. "Our expansion is really taking off and more and more people are feeling the benefit of Go-jek's way of operating," said Go-Jek CEO Nadiem Makarim recently. Grab CEO Anthony Tan, meanwhile, declared his bullish outlook in a recent LinkedIn post: "2018 was a big year. 2019 will only be better."

For now it seems that Grab might have an advantage over its rival. But, say analysts, if any company has what it takes to break Grab's grip on Southeast Asia, it is the Indonesian ride-hailer.

At the very least, Go-Jek finally looks ready to give Grab what it has been missing: some meaningful competition.