Prosecutors raise charges to murder for mother suspected of abuse 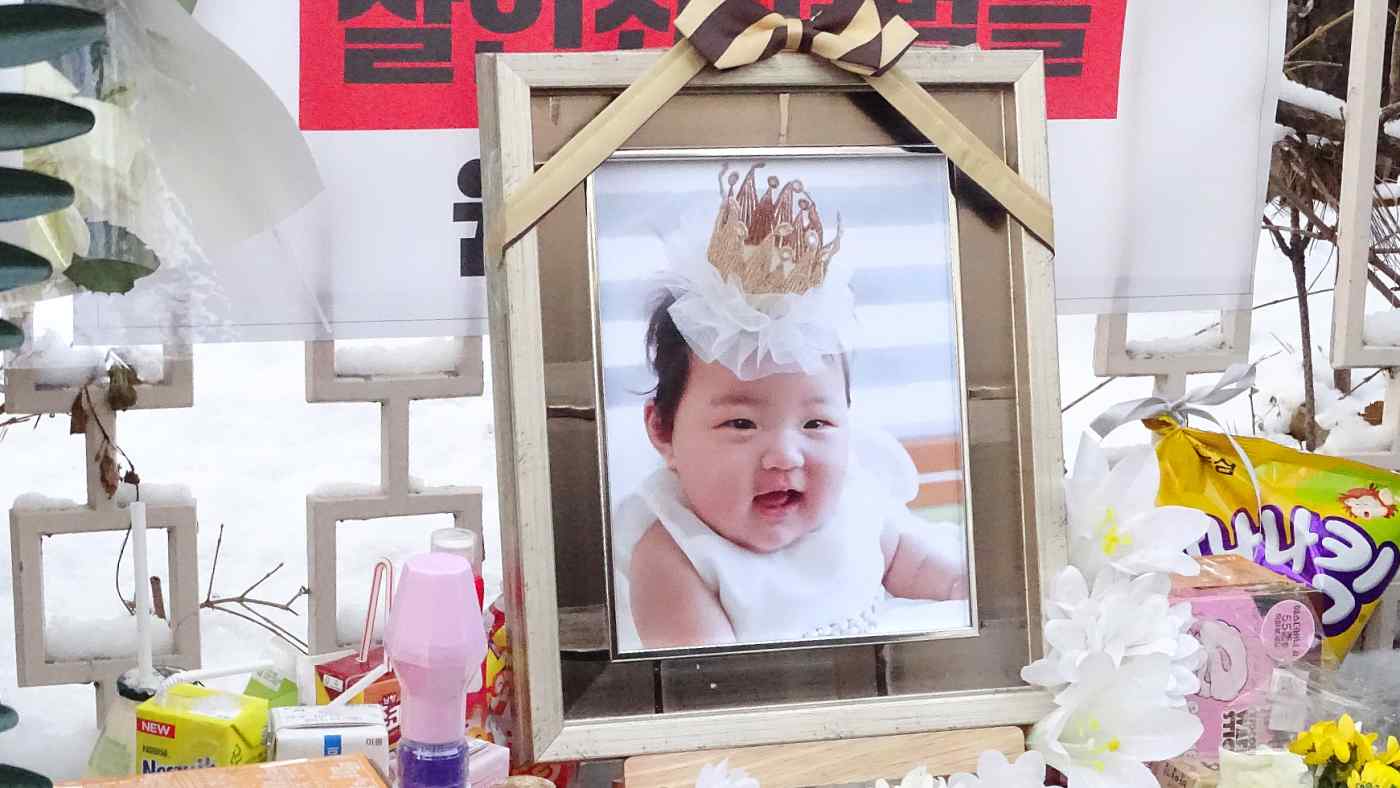 A photograph of Jeong-in is displayed outside a Seoul court on Wednesday. Her adoptive mother is now on trial for murder over allegations that abuse of the infant led to death. (Photo by Grace Moon)
GRACE MOON, Contributing writerJanuary 17, 2021 03:30 JST | South Korea
CopyCopied

SEOUL -- Protesters with the phrase "death penalty" painted in red on their face masks chanted and erupted in shrieks as they counted down to the start of a trial at Seoul Southern District Court on Wednesday morning.

The crowd was waiting to see if prosecutors would upgrade the charge to murder for a woman whose alleged brutal abuse led to the death of her adopted child, Jeong-in, in October at the age of only 16 months.

Their cries were heard. Prosecutors, under criticism for being too lenient, raised their earlier sentencing recommendation from involuntary manslaughter by child abuse after forensic experts reexamined the cause of the death. A second sentencing trial has been scheduled for April 17.

"The key point of the revised indictment is that the defendant caused a blunt-force injury by stepping strongly on the victim's back, with knowledge that applying force on the victim's abdomen, which had already been damaged, could lead to death," the prosecution said.

The adoptive mother denied the allegations, saying she had "no such intention" to cause the victim to die, while admitting to some of the abuse charges, including the fracturing of Jeong-in's left collarbone and right rib.

The incident blew up in South Korea after an investigative report on Jeong-in's death aired on SBS television earlier this month. The show revealed how police had failed to properly respond to several reports of the infant being abused at the hands of her adoptive parents.

Before Jeong-in's death, the girl's adoptive mother had grabbed both of her arms, shaking her and subsequently dropping the child, according to the adoptive parents' lawyer. After noticing Jeong-in wasn't feeling well afterward, the adoptive mother took her for emergency treatment, where doctors found bruises, ruptured organs and fractured bones.

As the adoptive mother's trial proceeds with a revised indictment, activists, lawyers and citizens are calling for a formal probe into a system that gravely failed to protect the infant.

Adoption came to the fore in South Korea after the onset of the Korean War in 1950. More than 200,000 overseas adoptions have been administered, with the majority of children sent to the U.S. The practice of international adoption was birthed after the war as a humanitarian rescue mission that sought to find homes for mixed-race children with American fathers.

Tobias Hubinette, an adoptee and scholar of Korean studies, wrote in his 2005 study "Comforting an Orphaned Nation" that adopting South Koreans rose in popularity in Western countries, where the number of white children was falling due to access to contraceptives and abortions, from the end of the 1960s. At that time, many South Korean rural migrants experienced urban poverty under the military regime of Park Chung-hee. Many children forced to work in factories experienced abandonment and were kidnapped to be put up for adoption.

Deregulation of the adoption industry, spearheaded by Holt International Children's Services -- Jeong-in's adoption agency -- led to a spike in competition among orphanages and agencies driven by economic incentives to turn out the highest number of "adoptable" children. Facilities received more support from foreign voluntary agencies if they had more children, with the number of cases peaking in 1985 at roughly 9,000.

Efforts by several adoptee advocacy groups helped pass revisions to the Special Adoption Act in 2011, implementing changes to the system such as making birth registrations mandatory. Megy Dokyung Kim, the president of the Korean Unwed Mothers Families' Association and campaigner for the revisions, said 90% of unmarried mothers were pressured by agencies to give up their babies.

But adoptees and activists like Kim said loopholes within the adoption system continue to resurface in ways that often harm the most vulnerable, as the services are in the hands of a few private organizations.

According to the Ministry of Health and Welfare, 42 children died of child abuse in 2019, with a total of 30,045 child abuse cases reported to child protection services. Figures from Statistics Korea show that 302,676 babies were born in South Korea that year, 704 of whom were adopted. Comparing the total population of children and adopted children with the number of respective deaths, 13.35% of adopted children were victims of abuse, double that of children raised by their biological parents. Protesters outside the court in Seoul on Monday. (Photo by Grace Moon)

Jeong-in's adoptive parents began their post-adoption process at the end of March with Holt -- by far the largest adoption agency in South Korea. The company penetrated the industry with the aim of Christianizing South Korean children and has been tied by activists to the deaths of adoptees from causes such as homicidal violence and depression.

Three separate reports suspecting child abuse of Jeong-in were filed in May, June and September by a pediatrician who had examined her, concerned day care workers and passersby who had spotted an unattended child alone in a vehicle on a hot day.

When authorities noticed bruises on Jeong-in's body, her adoptive parents told authorities they had massaged her legs in hopes of "straightening out her bowlegs." The police closed all cases, citing a lack of evidence to determine child abuse.

In response to criticism that the agency had overlooked signs of abuse, Holt published a statement on Dec. 22, the date the adoption was officially reported and one month after the report, explaining it had acted in accordance with the country's adoption manual by holding six counseling sessions over a span of 18 months and administered follow-up care after the adoption was confirmed. Holt turned down an interview request by Nikkei Asia.

"Following the adoption manual is the bare minimum and is only scraping the surface," said Helen Noh, who serves as the dean of the college of social sciences at Soongsil University. "Each individual case is drastically different, and these agencies are trusted to embody professional expertise while overseeing their duties."

The manual, created by the Ministry of Health and Welfare, requires prospective adoptive parents to undergo at least eight hours of education covering topics such as child-raising, the psychology and emotions of adopted children, and the general requirements of adoption.

However, child-welfare experts have expressed concern that eight hours is not long enough to digest the information and that these sessions are usually administered by employees at adoption agencies who lack professional training.

Though Jeong-in's case triggered deep shock in the public, she is not the first suspected victim.

A report on suspected abuse of another child, 4-year-old Eun-bi, was filed in 2016 after a person saw burns and bruises on her body. Her adoptive parents said the marks were due to her carelessly spilling ramen noodles, and police brushed off the report.

"Because young children cannot exercise their right to speak or express themselves, society tends to fail to think deeply about their human rights," said professor Do Mee-hyang, who teaches child welfare at Namseoul University. "They are still viewed as their parents' property, who can be blindly controlled."

Officials are rallying in response to public demands to toughen punishments for criminal child abuse.

Last week, the National Assembly passed a package of 18 bills targeting child abuse, making corporal punishment illegal and requiring police to immediately commence an investigation when a report of suspected abuse is filed. One lawmaker also submitted a bill to double the sentencing for child abusers, though the legislation was put on hold.

Experts including Kim Yeong-ju, a lawyer specializing in child abuse, question whether the swiftness of action will translate into meaningful reform.

"The statutory punishment for child abuse is relatively high already," Kim said. "But they serve more as sentencing guidelines rather than what's actually executed by the judge. Simply ramping up the sentencing for the perpetrator fails to address the basis of the problem that should focus on what factors of the system enabled Jeong-in's death."

While many observers are relieved that the prosecution decided to raise the charges, Kim said it marks only the beginning of a long road ahead.

"Not a single person did their jobs properly, and they all failed Jeong-in in some way, from law enforcement to adoption agencies and child protection services," Kim said. "There aren't only one or two loopholes in this system. We need to start with an empty slate and rethink the system fundamentally."