Naomi Osaka earned $37.4 million over the past year, according to Forbes -- a record for a female athlete -- thanks to lucrative sponsorships.   © Reuters
KOICHIRO YOSHINO, Nikkei staff writerJune 28, 2020 01:35 JST | Japan
CopyCopied

TOKYO -- There are always winners and losers in sports, but tennis is particularly unforgiving in that the performance gap is directly reflected in players' incomes.

Naomi Osaka, one of the world's top women's tennis players, placed 29th on Forbes' list last month of the world's highest-paid athletes with income of $37.4 million -- a record for a female athlete. Roger Federer became the first tennis player to lead the list, beating out soccer superstars Cristiano Ronaldo and Lionel Messi with $106.3 million.

Such figures highlight the vast disparities between the top and bottom of the tennis world, with a handful of stars striking it rich while many others struggle to get by. And the season suspension caused by the coronavirus is exacerbating the plight of lower-ranked players by robbing them of not only crucial prize money but also opportunities to climb up the rankings.

Tennis players are uniquely positioned to earn much of their income off the court.

Osaka has not performed exceptionally well this year, with tournament prize money accounting for just 10% of her total earnings. The rest comes from deals with 15 corporate sponsors, including Nike and All Nippon Airways.

Federer took in $6.3 million from competitions and $100 million from sponsorships from the likes of Fast Retailing brand Uniqlo. Kei Nishikori of Japan, ranked 40th on the Forbes list, has been sidelined with an elbow injury for several months but continued to bring in income from high-paying sponsorship contracts.

Tennis sponsorships totaled roughly $1 billion last year, according to one research firm, and are projected to grow more than 5% a year through 2027.

The season runs for 10 months of the year, matches are broadcast around the world, and the sport attracts large numbers of affluent and female fans -- two particularly valuable demographics. During an hourslong singles match, viewer attention is fixed on the two athletes on the court. 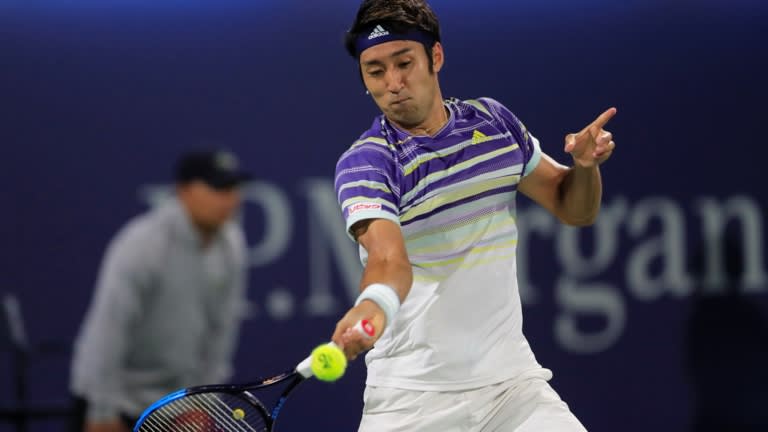 Yasutaka Uchiyama, the No. 90 men's player, said the sport should focus more on competitions than on providing relief to individual athletes.   © Reuters

All this makes the most prominent players -- the symbols of the sport -- invaluable to advertisers, and they are compensated accordingly.The problem is that incomes for the vast majority of players are relatively paltry.

The only ones who can consistently put food on the table "are the top 100 or so who can appear in Grand Slams," said 90th-ranked men's player Yasutaka Uchiyama, who is sponsored by Sekisui Chemical.

Players are estimated to need an annual income of at least $50,000 or so to afford to travel across the globe for competitions. Those ranked around the latter half of the 200s or below may end up spending more than they make.

While in baseball, for instance, revenue streams are redistributed to players throughout the sport in the form of annual salaries, such an arrangement would be difficult to replicate in tennis given its more individual nature.

In golf, as in tennis, competition prize money is a main source of income. But unlike in tennis, golf has numerous tours around the world spanning different skill levels. Players can make a career for themselves by performing well even in lower tiers.

By contrast, the only way to earn a real living in tennis is at the top -- the ATP Tour for men and the WTA Tour for women. The pyramid-shaped event structure is tied closely to the sport's ranking system, leaving players with nowhere else to go.

And now, the coronavirus has put on hold competitions that provide the only significant paydays for many lower-ranked players.

The governing bodies of world tennis are distributing a total of $6 million to about 800 players affected by the pandemic, andother relief programs have been proposed as well. But these have sparked complaints that some players could end up receiving more than they would have earned in a normal season. Novak Djokovic sent a letter in April calling for top players to contribute to a fund to help lower-ranked players struggling due to the pandemic.   © Reuters

The focus should be on "supporting the tournaments, more than individual athletes, and securing venues to play," Uchiyama said.

The tennis world is heavily guided by market forces, with supply and demand determining how much athletes can earn. Desirability to advertisers is based not only on results on the court, but also factors that boil down to luck, such as nationality, background and personality.

Masaya Kobayashi, a professor at Chiba University specializing in public philosophy, advises the sports world to "look to communitarian thinking" -- the idea of creating a community built on a spirit of mutual support, in which the strong help out the weak through policies such as redistribution.

The pandemic that has underscored the sport's income divide is starting to spur a rethink of how to fairly share the wealth.

Leading players were among the first to propose financial assistance for those less well-off. Men's No. 1 Novak Djokovic sent a letter proposing a partly player-funded relief fund to help those on the lower rungs of the ladder, from No. 250 down.

"We need to send the message to the tennis community and sports world that we care for each other and especially the future of tennis," he wrote.