After Atlanta shootings, anger over anti-Asian hate sweeps US

Protesters in New York and beyond pressure politicians to address racism 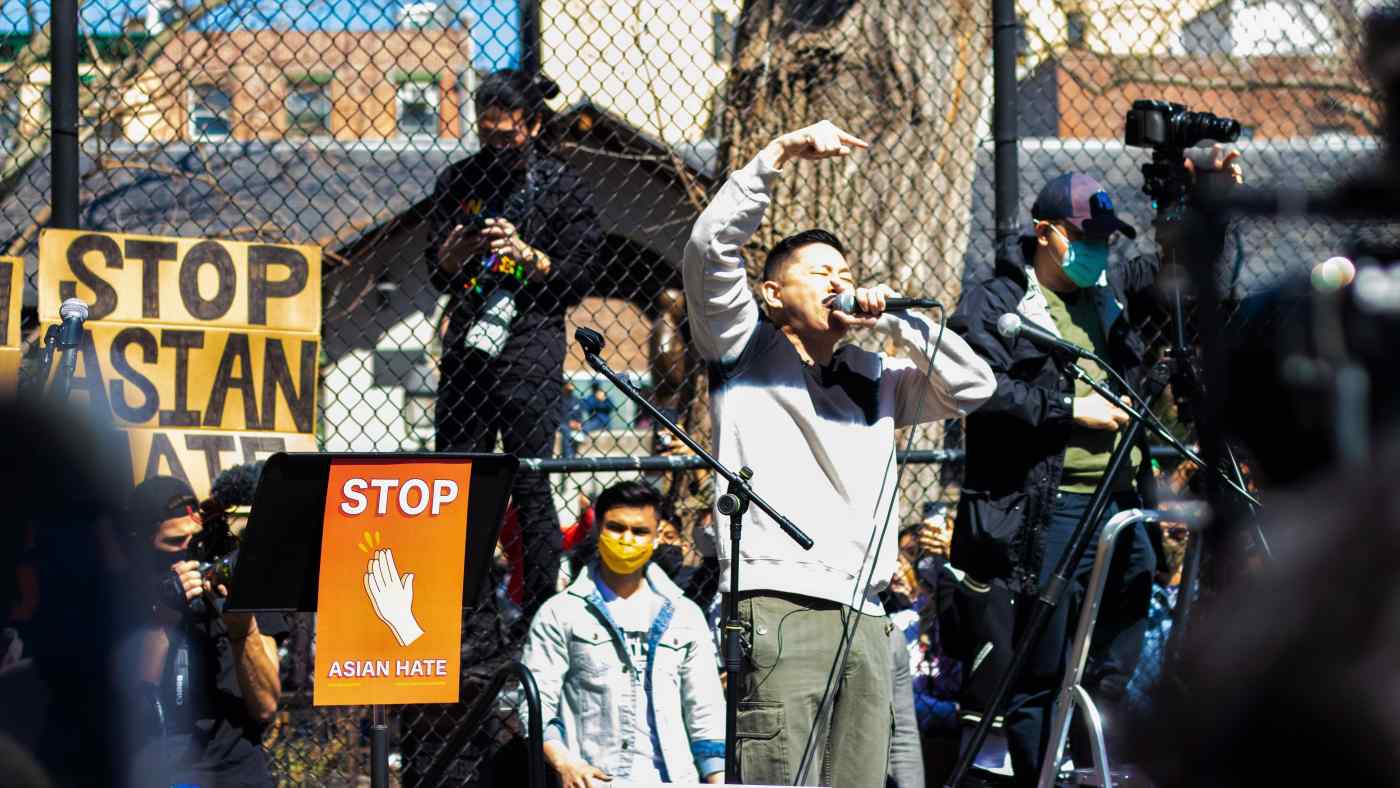 NEW YORK -- The killing of six women of Asian descent in Atlanta has sparked anger in Asian American communities that shows few signs of abating, elevating their fears and frustrations over racism into a major issue politicians cannot easily ignore.

Hundreds of New Yorkers gathered to protest this past weekend at Columbus Park in Manhattan's Chinatown, with rallies also held in cities including Washington D.C., Los Angeles and Seattle. More are planned in the coming days, spanning Tulsa to Cleveland and reaching into Canada, according to local media reports.

"How many times have you heard that? 'Go back to China! Go back to f------ China!' I heard it my whole life," John Liu, a New York senator and the first Asian American to win legislative office in the state, shouted to the Columbus Park crowd on Sunday. Recalling his entry into politics, he said, "I ran for city council because my city council member said that Asians are always looking to invade, not assimilate, that Asians are nothing more than rude merchants, illegal aliens and criminal smugglers."

Liu urged the protesters to continue taking action, and to support kindred movements like Black Lives Matter. "It's the same institutional racism that we have been facing. In order to change that racism, we have to be involved, come to rallies, and run for office."

The attack came amid an increasingly hostile atmosphere toward Asians during the COVID-19 pandemic: Anti-Asian hate crimes reported to police rose nearly 150% in 16 of the largest U.S. cities last year, according to a report by the Center for the Study of Hate and Extremism at California State University, San Bernardino. 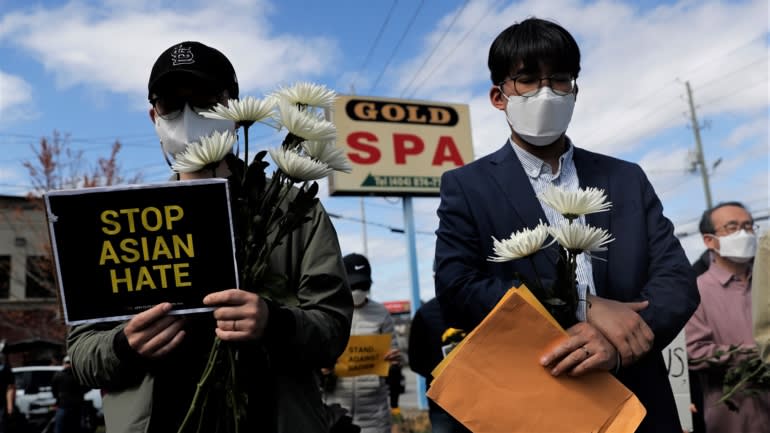 Men hold flowers during a vigil outside the Gold Spa on March 21, following the deadly shootings in Atlanta.   © Reuters

U.S. President Joe Biden and Vice President Kamala Harris spoke out days after the Atlanta shootings, with Biden describing Asian Americans' pandemic experience: "They've been attacked, blamed, scapegoated and harassed. They've been verbally assaulted, physically assaulted, killed. ... It's been a year of living in fear for their lives just to walk down the street."

But local officials and the U.S. media have drawn criticism for downplaying the Atlanta attacker's potential racial motivation, citing the 21-year-old white male suspect's own explanation. Capt. Jay Baker, a spokesman for the Atlanta sheriff's office, said the suspect had a "really bad day" and claimed to have a sex addiction. The spas, Baker suggested, were "a temptation for him that he wanted to eliminate."

Korean media including the South Korean daily newspaper Chosun Ilbo, however, reported that an eyewitness heard the shooter say "I'm going to kill all Asians" as he opened fire. And internet sleuths found insensitive content about Asians and COVID-19 allegedly posted by Baker himself.

These factors fueled the outrage at protests like New York's.

"I think it's ridiculous," said Vasantham Annadurai, 28, a doctor who joined a group called "White coats against anti-Asian hate."

Drawing a hypothetical comparison to a similar attack by a non-white perpetrator, Annadurai told Nikkei Asia: "How the media [and] the cops talk about that incident would've been very different. It makes you angry. It shows that [the police] very much empathized with the killer, not the victims at all." Annadurai's colleague, Lisle Winston, 28, echoed the criticism of the police.

"We've seen people having 'really bad days' in the hospital, none of them reacted in that way," Winston said. "I think all of us have noticed, with the pandemic, a rise in anti-Asian hate and increasing hate crimes."

Many critics of the police and media have also pointed out that racism and sexism are often closely linked. Many Asian women feel society reduces them to objects of sexual temptation -- like the temptation the shooter wanted to "eliminate." Some fear going out alone.

"I felt unsafe even before the shooting," Wendy, a 27-year-old Chinese expat working in finance, told Nikkei Asia in New York. "I set an alarm on my phone so I could call 911 quickly if something happens."

Wendy said she received abuse even while walking with friends. "Somebody yelled at me, 'Go back to China, you Chinese b----!' I think that's unfair because we work here and we contribute here."

She said it was time for every Asian person to "stand up" against hate to avoid another tragedy like Atlanta. Protesters rally against anti-Asian hate in New York's Columbus Park. One sign reads: "Call it what it is: racism and sexism." (Photo by Marrian Zhou)

Min, 27, a software engineer, said hostility toward Asians did not appear overnight.

"As an Asian living in America, although I've never encountered violence myself, there are a lot of subtle microaggressions that I've experienced a lot in my life and I think they accumulated," Min said at the rally. "Both violence and microaggression need to stop."

"We want people to sense our pain, our presence, their frustration," Yang said. "We feel that our problems have been suppressed for so long, that we've been told that we don't have it the same as other groups."

Yang stressed that Asian Americans are "just as New York as anyone else" and deserve to feel safe. But when it came to offering tangible solutions, Yang's suggestion was met with a mixed response.

"One of the first things I'm going to do [if elected mayor] is that I'm going to fully fund the Asian hate crimes task force in the police," he said. "This is not an issue you can have volunteers addressing. ... You dedicate resources until that problem feels like it is going down, not up." 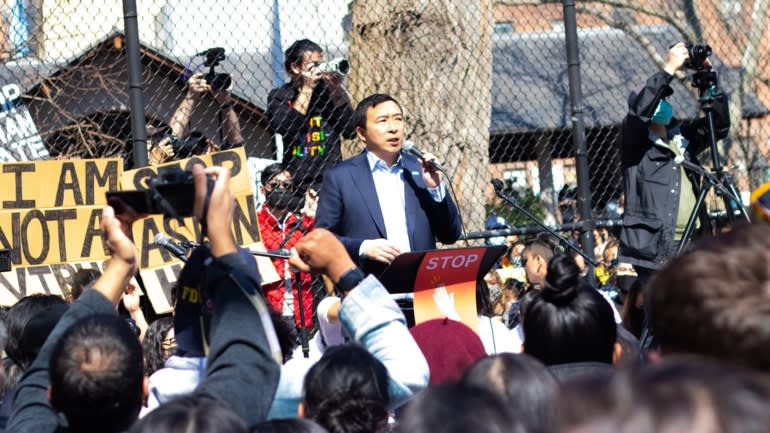 After last year's widespread protests over the death of George Floyd under the knee of a Minnesota police officer, and after the response last week in Atlanta, many are skeptical that police forces are the answer.

Some responded to Yang by chanting "Defund the Police!" The clear division raised the possibility that the issue could impact the Democratic mayoral primary in June.

The diverse crowd in Columbus Park grew in the afternoon, when protesters came over from another event called Black and Asian Solidarity.

"Let's not let the skin color or our ethnicity and culture fool each other, we're in the same fight, I'm on you guys' side with what happened in Georgia," said Coffey, a Black activist and organizer of the solidarity event.

"We feel what you guys are feeling because we've been feeling that since the day we were born," he said. "Now they're trying to turn the table and it's white supremacists against all of us."