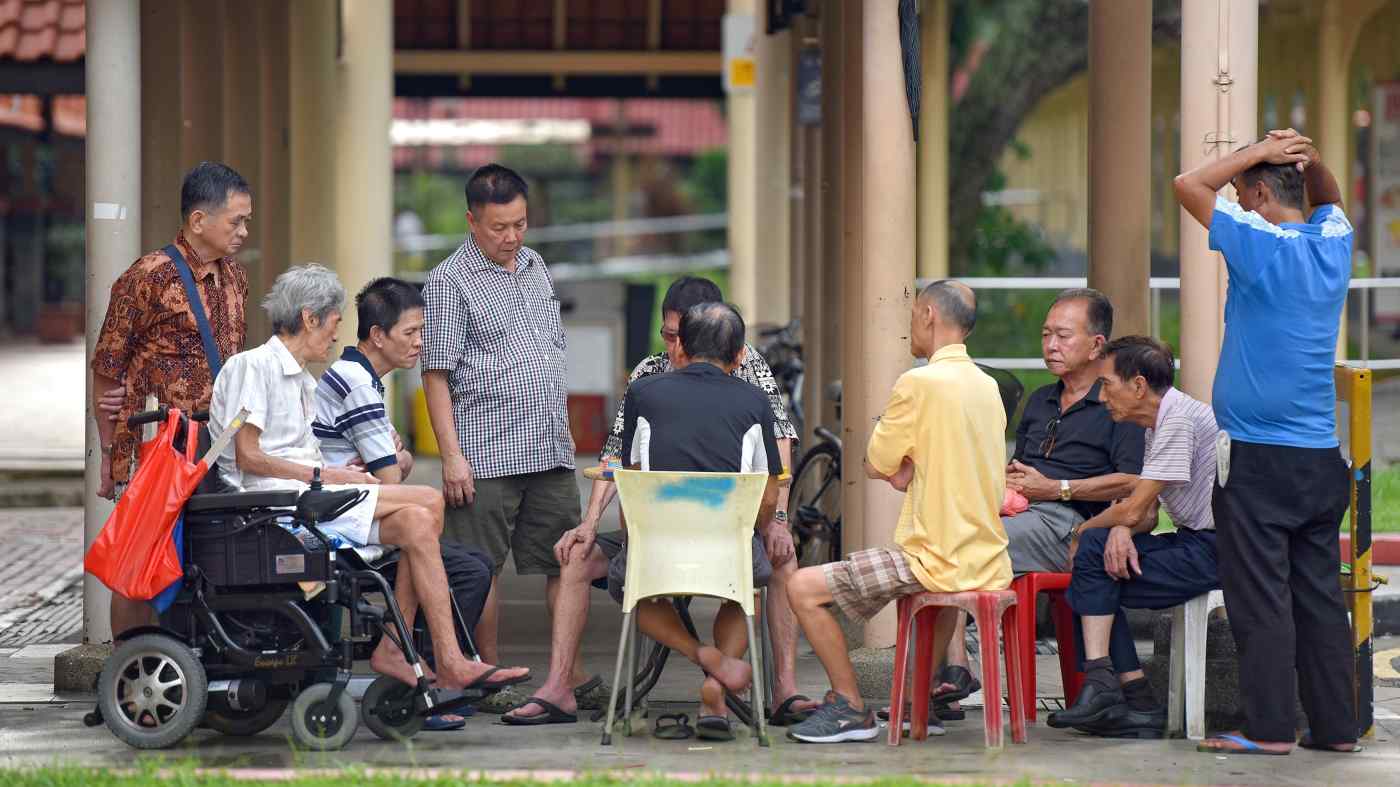 SINGAPORE -- Stroll along Singapore's East Coast Park and you will hear the waves crashing upon the shore, the breeze blowing in your ear, and all the usual sounds associated with a beach. But if you happen to visit early in the morning, you might hear something more unusual: lively Chinese music.

The tunes are played by small groups of seniors -- usually women in their 60s or 70s -- as they practice guangchang wu, or square dancing. At 7:15 on a recent weekday morning, 11 energetic women clad in colorful long-sleeve tops, black jogging pants, and sneakers gracefully executed perfectly synchronized movements. They stop after an hour of continuous dancing and gather around benches to towel down, drink water, and open packets of cookies to share, while chatting about the day ahead.

"After dancing, we feel so good and so happy," says Esther Loh, a youthful looking 70-year-old. She joined the group over a year ago, and dances with them every weekday morning.

When the meetups were suspended during Singapore's eight-week lockdown to curb the spread of COVID-19, Loh continued to exercise at home -- her son-in-law bought her a treadmill -- but "the feeling was different," she recalls. "I was very moody at home."

Loh's negative feelings could be attributed to a decrease in exercise and the feel-good endorphins it releases, or they may have another cause: a loss of social interaction brought about by the pandemic.

"For a long time, when people talk about the health of older persons, they mainly focus on diet and exercise," says Normala Binte Manap, of Singapore's Duke-NUS Medical School, who has spent the past three decades studying aging. "There's no doubt that those things contribute, but increasingly we're finding that these are not enough for maintaining good health and longevity. You need strong social networks and connection too."

In Singapore, and other parts of Asia, there is a growing interest in how people can live long and healthy lives. It is an issue that is especially pertinent given how three of the top four places with the world's highest life expectancies (Hong Kong, Japan, and Singapore) are all found in the region.

By 2050, the number of people aged 65 or older in Asia is expected to double to 937 million, according to the Asia Health and Wellbeing Initiative, a Japanese-government program. Many Asian governments have therefore, in recent years, turned their attention toward implementing policies and supporting initiatives that promote healthy aging -- a concept defined by the World Health Organization as "the process of developing and maintaining functional ability that enables well-being in older age."

There is mounting evidence to support what Manap and other aging experts, as well as older people themselves, have known for a long time: The art of aging well takes more than just having a good diet and exercising regularly.

There are many other "softer health drivers" that affect longevity, says science writer Marta Zaraska in her latest book Growing Young: How Friendship, Optimism and Kindness Can Help You Live to 100, which was published in June. "And these are much more pleasurable things than doing pushups."

As part of her research, Zaraska reviewed more than 600 clinical studies and research papers on the topic. What she found was startling: exercising and eating six servings of fruit and vegetables daily can lower your risk of dying early by 23 to 33%, and 26% respectively, but other factors may impact longevity in more significant ways. These include being in a committed romantic relationship (which reduces mortality risk by 49%), having a "large social network of family, friends, and helpful neighbors" (45%), volunteering (22%), and having a purpose in life (17%).

"But to live long, number one is definitely having some kind of social integration," says Zaraska. Taking part in synchronized activities, such as singing in a choir, jogging in a group or dancing with friends like how Loh does every morning, has been shown to "change our brain activation and impact us on a biological level."

"It gives us a boost of endorphins that not only makes us feel more connected to others but also has painkilling properties," she says.

Social isolation can be harmful, and loneliness in seniors is especially worrying. As social circles shrink, spouses die, and grown children move away, more and more older people find themselves living on their own. Loneliness can be both physically dangerous (help may not be at hand if they fall, for example) and mentally damaging (there is an increased risk of cognitive decline, depression and suicidal tendencies, among other negative impacts).

The pandemic, it seems, has worsened things. With countries in lockdown, community services such as home visits and senior activity centers were suspended for months, as were informal gatherings such as square dancing in the park. Seniors -- deemed most at risk for COVID-19 -- were advised not to venture outside.

"Staying home is good for preventing infection from COVID-19, but it makes people sedentary," says Katsunori Kondo, a professor of social epidemiology and health policy at Japan's Chiba University. "If such restricted life continues, many aspects of older people's cognitive and physical functions may decline. Social distancing for too long is bad for their health."

Recognizing the importance of social activities for the well-being of seniors, the country's Ministry of Health, Labor and Welfare recently issued a statement recommending that local municipalities continue or restart such programs, he says. "And yes, the government listened."

Other Asian countries are also trying to ensure seniors remain socially connected despite the pandemic. Government-run Neighborhood Resident Committees in China, for example, are working with local nonprofits to mobilize volunteers to conduct daily check-ins with those living alone, as well as to deliver groceries and medicines. In Singapore, the Red Cross and other charities report making more phone calls to keep an eye on vulnerable seniors, as well as delivering customized care packages to them.

South Korea, on the other hand, has taken a more high-tech approach. The country's largest wireless carrier, SK Telecom, has been using its smart speakers to track roughly 3,200 older adults. With their permission, the speaker's artificial intelligence system, Aria, listens in on their conversations and monitors their online searches. If no activity is logged in a 24-hour period or users begin frequently searching for terms associated with loneliness or insecurity, a red flag is raised and social workers are sent to check up on the senior.

"In many ways, COVID-19 has exacerbated this loneliness and isolation," says Manap. "But in other ways, it may be good as it will make us realize we need to strengthen our network community resources."

Governments, communities, and individuals all have a role to play in combating loneliness among seniors and helping them to age well, especially during a pandemic. "Often in times like these, there won't be adequate resources at the national level," she says. "So you need strong communities to respond too."