Doctors and nurses join US protests in the time of coronavirus NEW YORK -- Among the sea of thousands gathered at Times Square in the name of the Black Lives Matter movement, a young man wearing a black nurse uniform and a silver cross on his chest stepped onto a stone divider next to a New York Police Department sign.

With a T-shirt of George Floyd in one hand, he pulled down his blue mask and stared into the crowd below.

"How the f--- can I have made America great again and nurture us back to health when you wanna kill me?" he said, speaking at the top of his lungs Monday afternoon. "So I stand there and say, to all you crooked a-- cops, 'No Justice. No Peace! No Racist Police!'"

The crowd pumped their fists into the air as they shouted the phrases with him.

From coast to coast, protests have erupted in the U.S. as the country sits atop a powder keg fueled by racial strife, massive unemployment and the coronavirus pandemic. The unrest is reaching historic levels, with President Donald Trump on Monday threatening to place soldiers on the streets to restore order, labelling some governors "weak" for being unable to stop the looting and vandalism in their states.

But many of the demonstrations have been peaceful, with people marching shoulder to shoulder risking infection on behalf of black Americans slain by police officers.

The Black Lives Matter, or BLM, movement has been going on for years, but the recent killing of George Floyd in Minneapolis, Minnesota, who died of suffocation after a white officer knelt on his neck for nearly nine minutes, brought it back into sharp focus.

Floyd was accused of using a counterfeit $20 bill at a supermarket, was then pinned on the ground by officer Derek Chauvin near a police cruiser. During the 8 minutes and 46 seconds, Floyd was heard pleading multiple times -- "I can't breathe," "mama," "please," "I will" get in the car, according to video footage compiled by The New York Times. But Chauvin kept his knee on Floyd's neck even after Floyd had stopped moving.

In New York City, several protests are happening every day despite the city still being the epicenter of the COVID-19 outbreak. 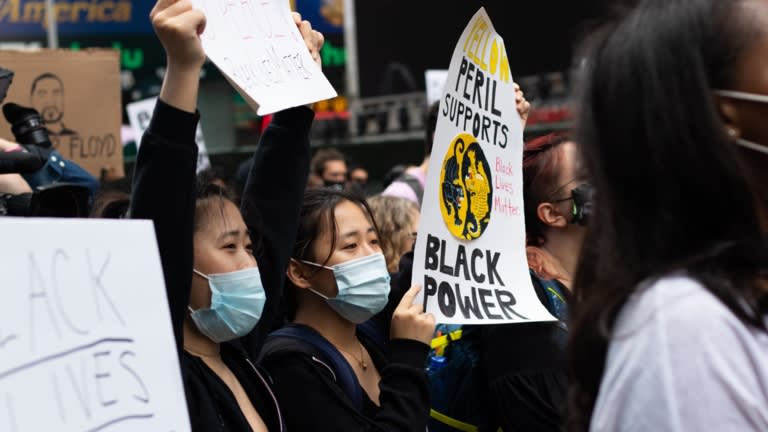 On Monday, thousands of protesters peacefully marched from Times Square to downtown Manhattan. The crowd was diverse -- black Americans, Asian Americans, Hispanic Americans, other minorities and white Americans walked the streets, with face masks on, in support of the BLM movement.

"We're afraid, we're aware, but the problem is there is a larger pandemic -- it's systematic racism," said Egypt, 25, who only gave her first name. "We want people to understand that this is peaceful but enough is enough. We're tired. [The police] were pepper spraying people earlier. We don't want violence, we want equality for all."

This is the general sentiment of the protest -- non-violent, but furious at the lack of change over the past 400 years, as protesters' signs pointed out.

"This is an issue that has been going on for years and nothing has been done about it... Your voice hasn't been heard so you have to make a point and get out there to do it yourself," said Johnny, 50, a product specialist who only gave his first name. "It's one of the movements that you're in charge [of] your destiny and your future. That's why I'm here, to support."

Multiple signs with the phrase "Yellow Peril for Black Power" and a logo of a yellow tiger and a black panther dancing in a Taiji were also spotted at the protest. Asian Americans have recently been the target of more racism, which many attribute to Trump calling the coronavirus the "Chinese virus." Many Asian Americans have been victims of physical and verbal attacks, making many realize that they are still seen as foreign in their own country.

"Asians often get labeled as the model minority and that's bull----. It's just another way for them to tell us that we're good at being quiet and we're not going to use our voices," said Jaylyn, 25, a marketing professional who only gave her first name. "There's a lot of risk with people going outside because of COVID-19, but our brothers and sisters are out there risking their lives every single day." 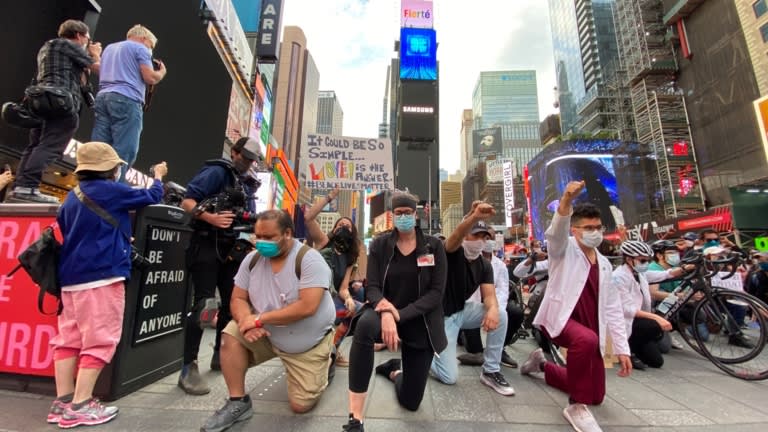 "This is something that involves everybody," Jaylyn continued. "We're gonna show you that everybody is angry, it's not just the black community. It's not a black vs. white, it's everybody vs. racists."

Eileen, 18, and Jennifer, 21, both university students, had been running back and forth in the march and passing out water bottles. Although Eileen was afraid to get infected and planned to get tested after the protest, they both felt the need to come out and support the cause.

Jennifer, from the Medical Reserve Corps, a national network of volunteers, was handing out face masks to make sure "people are covering their noses and mouths" to help stop the spread of COVID-19 and still enable protesters to "stand up for what they believe in."

Kaima, a 24-year-old pharmacist who was still in her uniform, joined the protest after work.

"Forget the pandemic at this point, if I'm going to be killed by people that are supposed to protect me, what is a virus going to do for me?" she said. "That's why we're all here, because we're all standing up for what's right and we all deserve to be treated, saved and alive."

The pandemic has highlighted America's racial and economic disparities, showing a lack of access to health care and protective equipment for lower income households. Black people are dying nearly two times higher than their population share due to COVID-19, according to the COVID Tracking Project. Health care workers have seen the problem firsthand and have joined the protests despite concerns over the virus's spread.

On Tuesday night, hundreds of doctors and nurses, many of whom have been on the front lines of COVID-19, gathered at the famous red stairs in Times Square.

Signs such as "White coats for Black lives," "Stop killing our patients" and "Front line for front line" were held high in the crowd. Then, the crowd kneeled in silence for nine minutes to honor George Floyd.

"COVID-19 has been an issue of structural racism, a lack of access to health care, racism stigma... We see these issues aligned," said Dr. Kim Sue, who has been caring for COVID-19 patients in Queens. "Black patients and Hispanic patients are more likely to die of it, they're on the front line, they're essential workers.... The killing of black people in this country is unacceptable. It's a public health issue, it's a medical issue and health care workers aren't going to stand for it any longer."

Dr. Sue said that although she is still very worried about super spreader events and COVID-19, racism and the pandemic are "linked issues" for her and her colleagues and they "can't be silent any longer."

A nurse wearing a pink uniform, who declined to give her name, said this is "the beginning of a global uprising." Doctors and nurses join the protests at Times Square. (Photo by Marrian Zhou)

"Of course I'm worried about [case numbers going up], they are going to, I think everywhere in the country the number is going up," she said. "[But] the community that is most affected by this pandemic are people of color... I think enough is enough. They're not going to take it anymore. It can't go back to normal."

Isabel, a recent nursing school graduate, was "thrown into a 100% COVID unit" a week before the apex of the curve. It was her first hospital job and she was on night shifts. She said she was "still processing" the loss of life she witnessed.

Although she is fully aware of the risks of large crowds, Isabel said she is "more worried about this world" if she's not here supporting this cause.

It was roughly 15 minutes before New York City's new 8 p.m. curfew, when a sea of chanting white coats passed by Koreatown, while another large group of protesters caught up right behind them. They were shouting "No Justice! No Peace!" Nobody seemed to ready to go home.

Protests have turned into riots in some cities and looters have forced retail stores to install wooden boards on their windows across America. Looters have damaged buildings and stores, sometimes breaking into places while the sun is still up, as early as 7 p.m. There have been several cases where protesters tried to stop the looting.

Police have responded to protests with rubber bullets, tear gas and pepper spray, sometimes unprovoked, according to several U.S. media outlets. One video showed a police car ramming into a crowd of protesters. Different from protests in the past, there have also been several cases of journalists being injured and arrested by the police, The Los Angeles Times reported.

Trump on Monday declared himself as the "president of law and order" and said he will use every available federal force, including the National Guard and military, to end nationwide riots that had taken place for days. He had called state governors weak and urged them to "dominate" the streets, according to a transcript of a conference call the president had with governors.

"[Trump] is a racist, he doesn't care, he wants to solve everything with force. He didn't even ask what he could do or how we can come to a conclusion," said Sandy, 55, who protested on Monday. "He went to hide in the bunker and came out to tell us our mayors and governors are weak. That's not the truth... I don't expect anything from Trump, it's going to be done on the lower level from the mayors, the governors, from the people. Nothing from Trump."

The U.S. has historically been a beacon of human rights and freedom of speech. The Trump administration had especially condemned how the Hong Kong police had handled the ongoing protests with force. Trump tweeted in August last year that "if President Xi would meet directly and personally with the protesters, there would be a happy and enlightened ending to the Hong Kong problem. I have no doubt!"

As Trump moves to pressure Beijing over Hong Kong's autonomy and the new national security bill, he may open himself up to the same criticism.

"You have the terrible racial incidents in the U.S., and Trump's response was 'shoot the looters,' which has just inflamed the situation. That's a boost for Chinese propaganda," said Daniel Russel, former U.S. assistant secretary of state for East Asian and Pacific Affairs. "'Since when is Donald Trump in a position to lecture us about human rights? That's hypocritical, he clearly doesn't care about human rights.' This is their talking point."