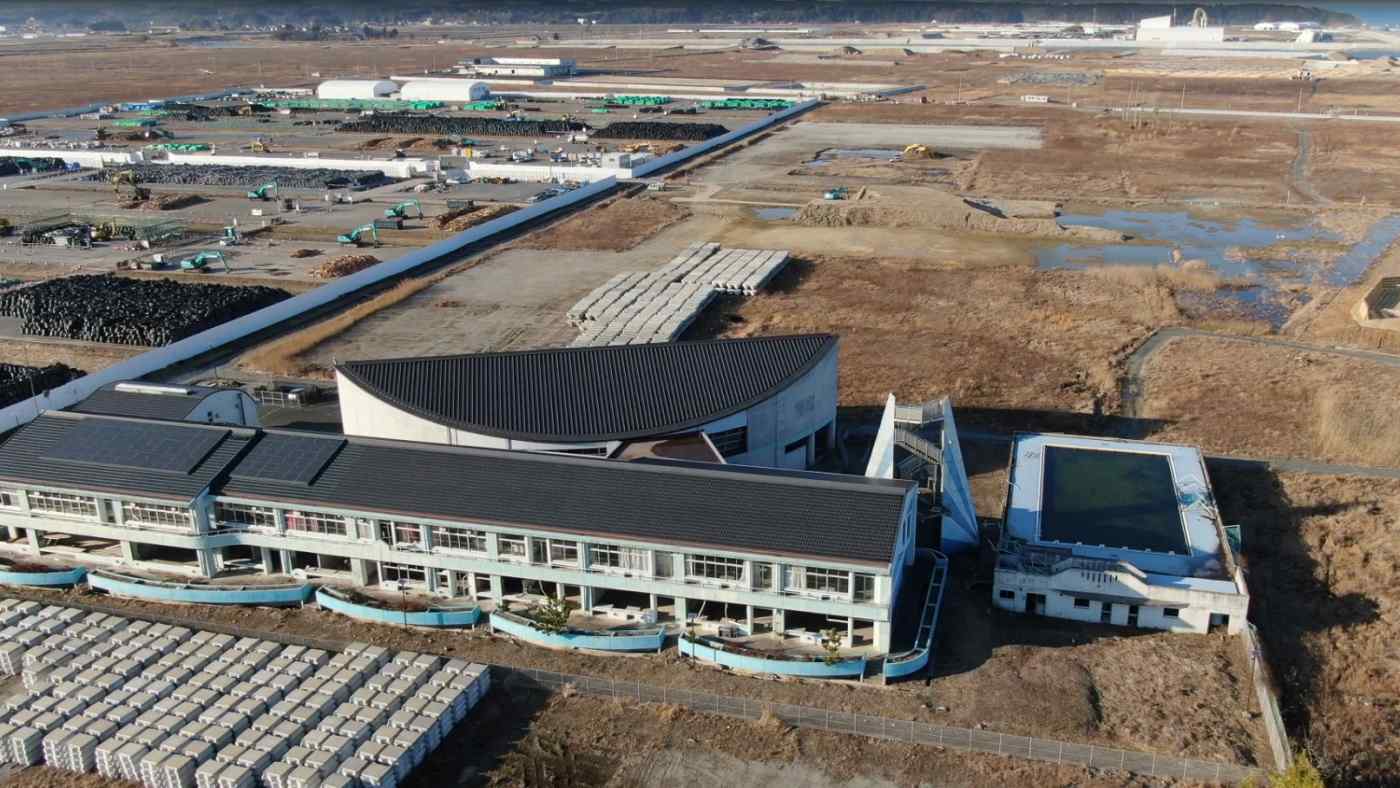 NAMIE, Japan -- Amid the vacant houses and barren fields here stands a shining new symbol of the community's slow journey back from disaster to everyday Japanese life: a convenience store.

The town of Namie sits just north of the Fukushima Daiichi nuclear power plant, which was plunged into meltdown when a deadly earthquake and tsunami struck nine years ago Wednesday.

Little by little, the debris has been cleared away and businesses have returned. The town's new 7-Eleven, which opened in January, represents an investment for the future, store representative Tadayoshi Nihongi said.

"I considered various places to open a 7-Eleven and chose a location that would grow from now on," said Nihongi, who made the decision as he was about to retire from his previous job. There was also some local government support, he said.

Nihongi, who hails from Miyagi Prefecture, next to Fukushima Prefecture, said the store serves mainly workers involved in decommissioning the nuclear power plant or rebuilding infrastructure. More retail businesses will be needed "as more people come to live in the town." While Namie's population is still only about 1,100 -- just 5% of its pre-disaster level -- investment is gradually taking shape in the form of supermarkets, eateries and industrial facilities. The population is growing again, and the number of businesses rose by 25 from last year, according to the town government.

Radiation has been a key concern stopping young people from returning. According to the local government, the level around the town hall is about 0.1 microsievert per hour, well below the government-set safety threshold of 0.23.

"Radiation levels measured in October 2019 decreased significantly in many zones compared with the previous year," Greenpeace Japan said on Monday in its latest survey covering Namie and other affected areas around Fukushima Daiichi. However, the organization said that heavy typhoon rains that fell on the region just before the survey likely moved radioactive materials.

Just a short walk from the town hall, an Aeon supermarket opened last July. The inside looks like a supersized convenience store, with much of the shelves dedicated to alcohol and instant noodles geared for construction workers. But like 7-Eleven, the focus is on Namie's future prospects. 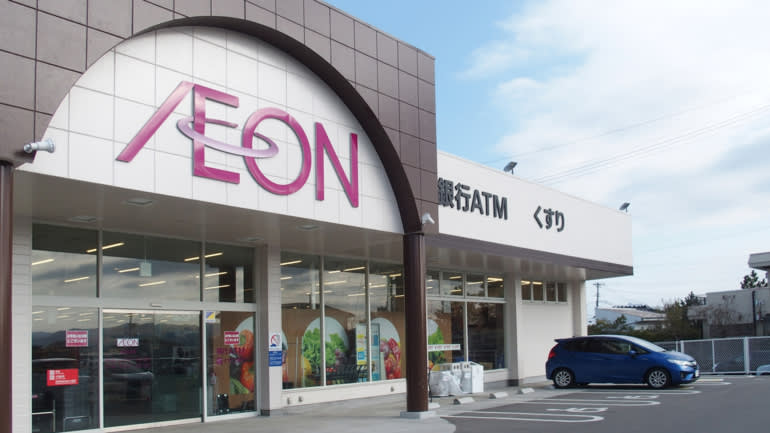 The store opening last year "was not about profitability, but about our company supporting the reconstruction of Namie," manager Shunsuke Nihongi said.

The town has also attracted high-tech investment in clean energy.

"Since three years ago, when the evacuation order was partly lifted, we have been sowing various seeds to regenerate the local economy and create a new Namie," Mayor Kazuhiro Yoshida said last Saturday at the opening ceremony for a hydrogen production plant -- one of the biggest in the world. "One of the seeds has just blossomed into a large flower," he said.

The area facing the Pacific Ocean where the hydrogen facility is located sits largely empty, having been ravaged by the tsunami. Construction is underway on some other projects, and a seafood-processing center is planned to begin operations in April.

Another symbolic development is the reopening of railway service between Namie and Tomioka stations on March 14. This connects Namie to the more populated city of Iwaki, and all the way on to Ibaraki and Chiba Prefectures and Tokyo.

The Tokyo Olympics torch relay, scheduled to start later this month, includes Namie in its route. Such events are supposed to attract visitors to the town, although the coronavirus outbreak has created uncertainty over the timing.

"There are so many things being built, but there are no people," said a 60-year-old man who returned to live in Namie last summer. Still, "there's nothing good for me when I live elsewhere," he said.

A 45-year-old woman shopping at Aeon said living in Namie "is not particularly inconvenient." She moved here in December 2018 with her husband, who was originally from the town. Since then, there have been "more children here and there," but she complained of a lack of hospitals open full-time. 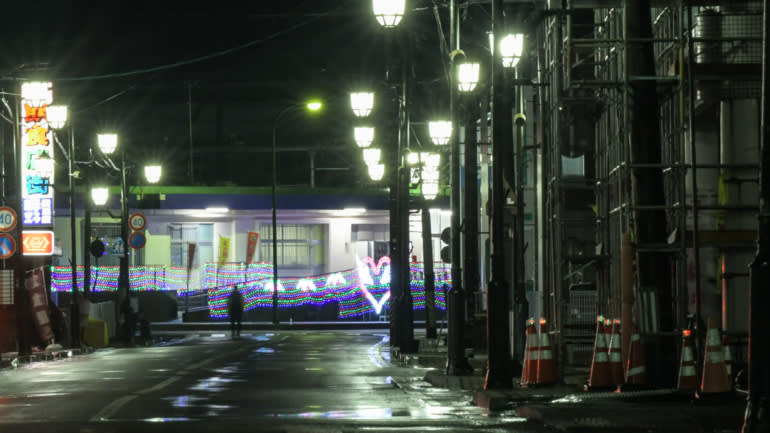 A street in Namie lies quiet on March 10, the eve of the disaster anniversary. (Photo by Kohnosuke Urata)

More than 180 people were killed or left missing and presumed dead when the March 11, 2011 earthquake and tsunami hit Namie. The ensuing tsunami of over 15 meters flooded 6 sq. km of the town's 223 sq. km, destroying 651 homes and damaging about 1,000 businesses.

The Fukushima meltdowns forced the evacuation of more than 21,000 residents. The evacuation order was lifted on March 31, 2017, in areas surrounding the town hall with low radiation levels. Namie plans to complete the restoration of infrastructure and major transportation networks by March 2021 to improve the living environment.

The town economy still largely runs on subsidies, including support for returnees and businesses. Prime Minister Shinzo Abe recently visited Fukushima and announced that the government would provide additional aid to encourage more people to live in the coastal area.

The pre-disaster population is scattered across the country, with about two-thirds staying within Fukushima Prefecture. Just 852 had returned to Namie as of January. The actual population is uncertain, because some only register in Namie but live in other places.

For last fiscal year, tax revenue grants and subsidies from Fukushima Prefecture and the central government accounted for more than half of the town's income.

"There needs to be more flows of money and people to make this place livable," said Shun Ito, who works at Cafe Cosmos in the town's provisional commercial center. He lives in neighboring Minamisoma. "There is no reason to live here if you cannot make a living," Ito said.

"The best thing [for the town] is that the locals come back," 7-Eleven's Nihongi said. One factor that would make this possible is necessary infrastructure, such as train service, he said.

"On March 4, the evacuation order was lifted for all areas except difficult-to-return zones [where radiation is high], and full-scale reconstruction and revitalization has begun," Chief Cabinet Secretary Yoshihide Suga told reporters on Wednesday.

Suga was not just talking about Namie. About 31,000 former Fukushima denizens still live outside the prefecture as of March. In the neighboring town of Futaba, the evacuation order was lifted for some areas this month.

"There's still more that needs to be done to support the victims and full-scale reconstruction and revitalization of areas affected by the nuclear accident," Suga said.