Hate crimes against Asian Americans surge in US NEW YORK -- Asians are becoming the targets of a growing number of hate crimes in the U.S.

Shootings that killed six Asian women in Atlanta on Tuesday night sparked fears in the Asian American community, though it is still unknown if they were motivated by racial hatred. President Joe Biden has expressed strong concern about hate crimes against Asians.

According to Stop AAPI Hate, a private organization comprising Asian Americans and Pacific Islanders, there were 3,795 hate crimes against Asians from March 19, 2020, to Feb. 28, 2021, with 503 of them in January and February.

A spokesperson said these are just the tip of the iceberg and show how powerless Asian Americans are against discrimination.

A survey conducted by the Center for the Study of Hate and Extremism at California State University, San Bernardino found that even as the number of hate crimes in 16 cities, including New York and Los Angeles, fell 7% on the year to 1,717 in 2020, crimes against Asians jumped 150%.

The recent attacks have also become a diplomatic headache for the Biden administration.

The issue was also discussed at the "two-plus-two" talks in Seoul between the top diplomats and defense chiefs of the U.S. and South Korea.

"We'd like to send our deepest sympathies to those who were among those sacrificed [in Atlanta]. We confirmed that there are also Korean Americans," South Korean Foreign Minister Chung Eui-yong told reporters. "It is our utmost interest to seek the safety of those Koreans living in the U.S."

Secretary of State Antony Blinken, who arrived in South Korea on Wednesday for talks, also said, "We will stand up for the right of our fellow Americans and Korean Americans to be safe, to be treated with dignity and respect." Police told reporters on Wednesday that the suspect had issues with sexual addiction and that the shootings may not have been motivated by racial hatred.

Biden expressed strong concern over the shootings on Wednesday. "Whatever the motivation here, I know that Asian Americans are ... very concerned because, as you know, I've been speaking about the brutality against Asian Americans ... and it is very, very troublesome," the president said.

Former President Barack Obama tweeted, "Although the shooter's motive is not yet clear, the identity of the victims underscores an alarming rise in anti-Asian violence that must end." 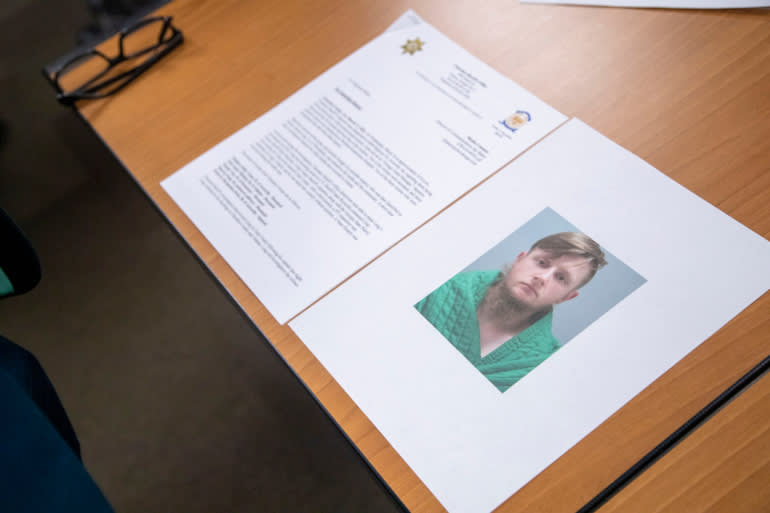 An image of Robert Aaron Long, charged in Tuesday's shootings, is displayed at police headquarters in Atlanta.   © AP

"We stand with you and understand how this has frightened and shocked and outraged all people. But knowing the increasing level of hate crime against our Asian American brothers and sisters, we also want to speak out in solidarity with them and acknowledge that none of us should ever be silent in the face of any form of hate," she said in an address.

In a March 11 speech, Biden said that Asian Americans have been attacked, harassed, blamed and scapegoated amid the COVID-19 pandemic. On Saturday, more than 1,000 Asian residents rallied in the Little Tokyo district of Los Angeles.

The Asian American Journalist Association on Wednesday released guidance on the Atlanta shooting. It urged newsrooms to "cover the shootings in the context of the current rise in attacks on Asian Americans" and to avoid language that "could fuel the hypersexualization of Asian women, which has been linked to violence and discrimination."

The guidance also calls for a better understanding of anti-Asian racism, saying, "Racism against AAPIs is highly nuanced, complex, and has remained historically invisible, and includes a long history of hypersexualization of Asian women that is rooted in Westernized and colonial perceptions of Asia."