Low-income earners and others in need receive food and other items donated by fellow citizens at public pantries across the country. (Photo by Akira Kodaka)
Society

In pictures: Thais pitch in to help others in need

The kingdom's charitable side shines as the coronavirus ravages the economy

BANGKOK -- Thailand is gradually emerging from a government lockdown imposed to stem the spread of the novel coronavirus. The strict emergency measures have undoubtedly helped, but not without a cost. Many people have seen their livelihoods shrink or evaporate entirely, forcing them to struggle to make ends meet.

Their hardships have revealed the deeply charitable aspect of Thai culture that casual visitors to the kingdom often miss: the practice of tum boon, or making merit.

The spirit of tum boon can be seen in the numerous pantries that have popped up near cafes, private homes and office buildings. These pantries allow people to give or take freely food and other household essentials -- a huge help for the less fortunate in this Buddhist country.

In this short essay, photographed in and around Bangkok between April 21 and May 29, we take a closer look at how tum boon has manifested during the pandemic, as well as some of its benefactors and beneficiaries. 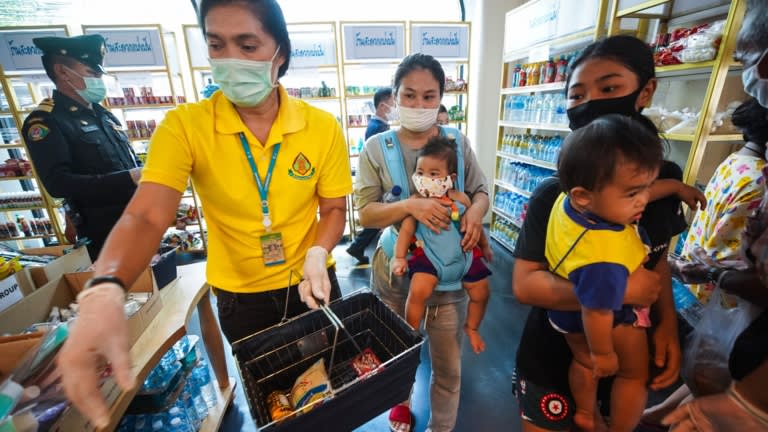 A Bangkok restaurant temporarily closed due to the pandemic is converted to a tu pan suk, or happiness-sharing pantry. The owner of the building where the restaurant resides asked friends and acquaintances to donate something. The tu pan suk opens every Friday. People in need are given three minutes each to select items to bring home. In early May, a project was launched to set up donation areas -- essentially shelves placed along streets -- where people could donate food, clothing and other items. It started with just five locations but has since grown to 1,400 across the country. People put a wide range of items on the shelves, including instant noodles, eggs, soy milk, diapers, nuts and water. One needy Thai awaits his turn at a food pantry. 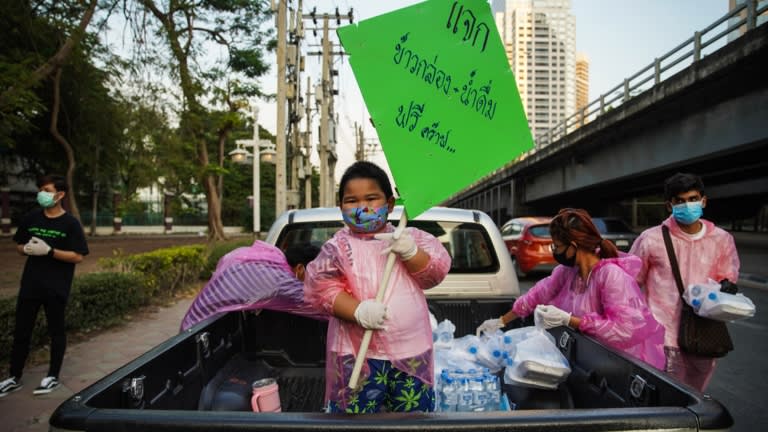 The pandemic has caused economic pain across a large swath of Thai society. Here, a young volunteer helps distribute supplies to homeless in a park. A child takes a break while awaiting a free meal. Foreign workers are also receiving donations, like this immigrant worker from Laos (right), who expresses his gratitude with the traditional Thai greeting Chansuk Kampachit, 22, left, struggled obtaining basic necessities after her pay was drastically cut. She located a charitable group on the internet, which delivered food and other items to her home. "Seeing people helping others in a foreign country has warmed my heart," she said. The government has also pitched in, opening a facility for the poor in the Bangkok suburbs of Pathum Thani Province north of the capital, as the number of unemployed skyrocketed. Taweep Jaikla, 53, who now stays in the facility, was making a living by collecting waste before his life was turned upside down after work dried up. "I now feel safe," he said. 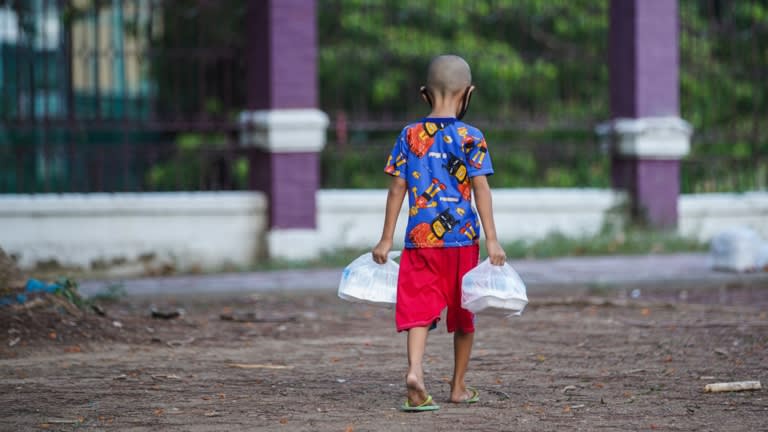