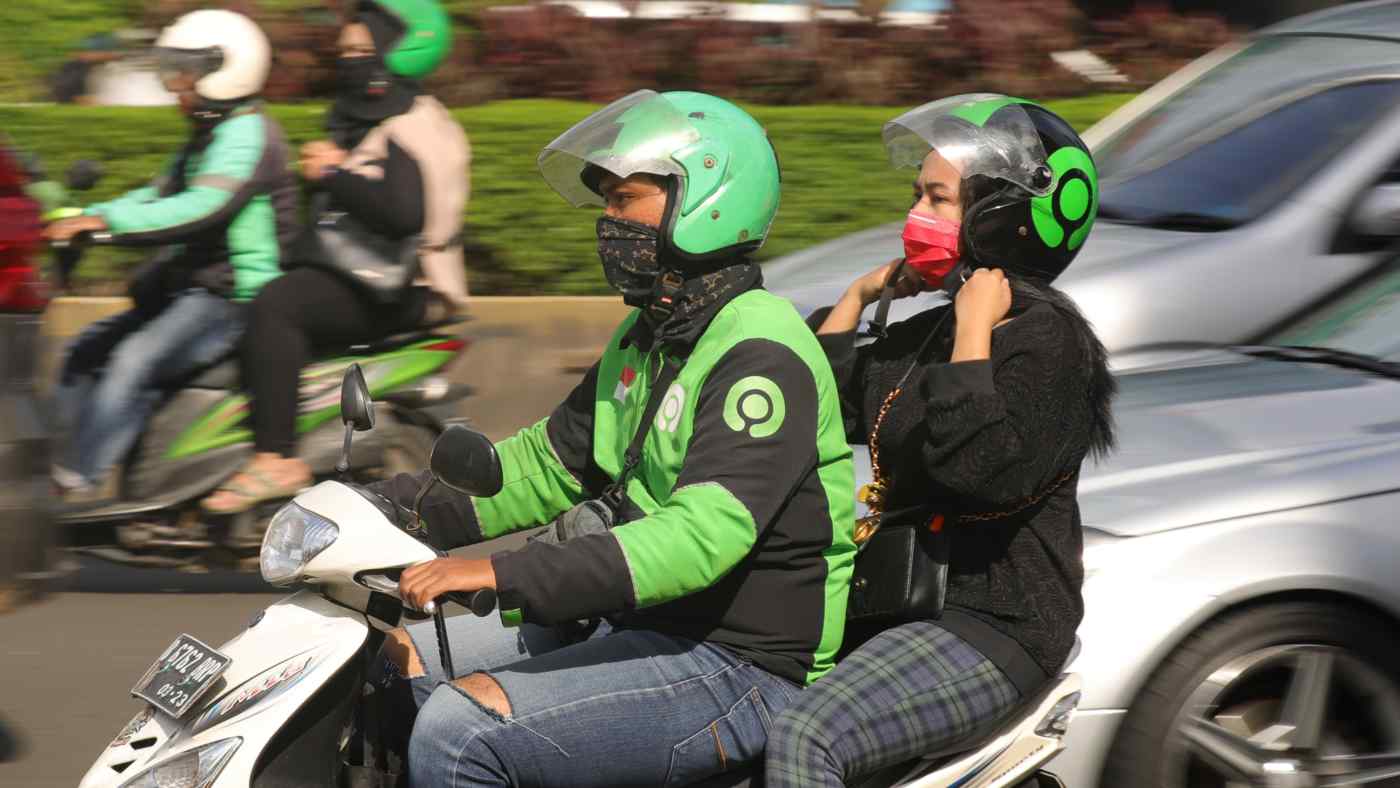 JAKARTA -- Ride-hailing drivers and others working in Indonesia's informal economy have lost work after the government responded this week to the coronavirus pandemic by urging people to work from home if possible.

Indonesia has the largest economy in Southeast Asia. As with other developing countries in Asia-Pacific, more than half its workers are in the informal sector. There is therefore a risk that any policy missteps in battling the COVID-19 virus will aggravate poverty.

"My income dropped to 30,000 rupiahs ($2.1) yesterday as I had fewer customers," said Ahmad Basuki, a driver in east Jakarta for Go-Jek, the Indonesian ride-hailing startup.

Basuki usually has eight to ten orders each day and earns 80,000 to 100,000 rupiahs. After the government asked people on Sunday to work from home, Basuki's orders have fallen to about three each day, severely reducing his income.

"If the government wants to restrict the movement of people, please think about the fate of workers like us," Basuki said. "If we don't work, we can't eat."

Street vendors and ride-hailing drivers are good examples of informal workers. The International Labor Organization (ILO) defines informal employment as all remunerative work -- including self-employment and wage employment -- that is not registered, regulated or protected by existing legal or regulatory frameworks, as well as nonremunerative work undertaken in an income-producing enterprise. Informal workers typically do not have secure employment contracts, benefits, social protection or collective representation, according to the ILO.

Asian economies will be seriously damaged if informal workers find themselves jobless, and this could also stir up social unrest.

"We can't work from home," said Wulan, a spa worker in a Jakarta shopping mall. She said fewer people are visiting because the government has advised them to stay home, and this has dented business.

"I can survive a week or two, but I don't know what will happen in a month's time," she said. Wulan is a single mother with a child at elementary school. She has already cut back on clothing and other expenses to buy food. A worker sprays disinfectant at the international arrivals terminal of Soekarno-Hatta Airport near Jakarta on March 13.   © Reuters

Indonesia's first coronavirus infections were confirmed on March 2, and have increased quickly, particularly in Jakarta. As of Wednesday, 227 infections and 19 deaths had been confirmed -- the largest death toll in Southeast Asia so far.

The World Health Organization (WHO) issued a warning to Indonesia and other Asian countries on Tuesday. "The situation is evolving rapidly," said Dr Poonam Khetrapal Singh, WHO's director for Southeast Asia. "We need to immediately scale up all efforts to prevent the virus from infecting more people."

Italy has imposed strict nationwide restrictions on people leaving their homes, and the British government is considering a lockdown on London. Shelter-in-place orders have been enacted in San Francisco and elsewhere in the U.S. Closer to Indonesia, Malaysia has restricted movement around the country, and people on Luzon island in the Philippines are similarly affected.

President Joko Widodo, speaking at the presidential palace in Bogor, West Java, on Monday, said: "We are not thinking about a lockdown for now."

The Indonesian president has so far resisted calls from government officials and medical experts for a lockdown to curb the spread of infections, fearing that the economic and social consequences would be too serious, particularly for informal workers. But Widodo has not ruled one out eventually.

"In Indonesia, there are still many people who work in the informal sector on daily wages," said Wiku Adisasmio, a professor of public health and policy at the University of Indonesia. "That is the concern of the government. If everyone is at home with a lockdown, it's difficult for those groups and has an impact on the country's economy." Adisasmio believes there needs to be financial assistance to the informal sector ahead of any lockdown to alleviate "the long-term economic impact."

The government began issuing pre-work cards (kartu pra-kerja) to jobless people on Friday, enabling them to receive vocational training. In view of increased unemployment, the Widodo administration has brought forward the issuance of these cards from August, when it was originally scheduled. It will also strive to stabilize prices of nine staple foods, includuing rice, sugar and eggs.

In Europe and the Americas informal workers represent about 20% and 36%, respectively, of total non-farm employment. In Asia-Pacific, that figure is nearly 60%, and in Indonesia it is about 55%. If Widodo has to enforce a lockdown, people who have found work in recent years with disruptive companies like Go-Jek and Grab will be seriously affected. A shopping mall in Bali is mostly deserted, with some restaurants and shops closed, on March 15. (Photo by Jun Suzuki)

Other jobs have already been lost. The number of visitors to Bali, one of the most popular tourist resorts in the world, has plunged. On Feb. 5, flights from China were halted and anyone who had visited China in the previous 14 days was banned from entry. On Friday, the government went a step further with the temporary suspension of all tourist visas.

As usually bustling areas like Bali lose their luster, some restaurants and shops have already closed. "I've lost my job because the arrival of Chinese tourists ceased in February," said Erica, a hairdresser at a Jakarta salon popular with foreign visitors.

Some businesses are trying to support informal workers. For example, Go-Jek will give income support to drivers infected with the coronavirus, and help with motorcycle purchase loans until they can return to work. The initiative is a first since the drivers do not have a direct employment contract with the company.

"Go-Jek strives to keep people living as [normally] as possible amid the challenges of COVID-19, including partners in our ecosystem," said Kevin Aluwi, the company's co-chief executive.

If others fail to also reach out in such ways, there are fears the economic scars could long outlive the direct effects of the pandemic.