Traditional official ceremonies to be skipped amid controversy over his family 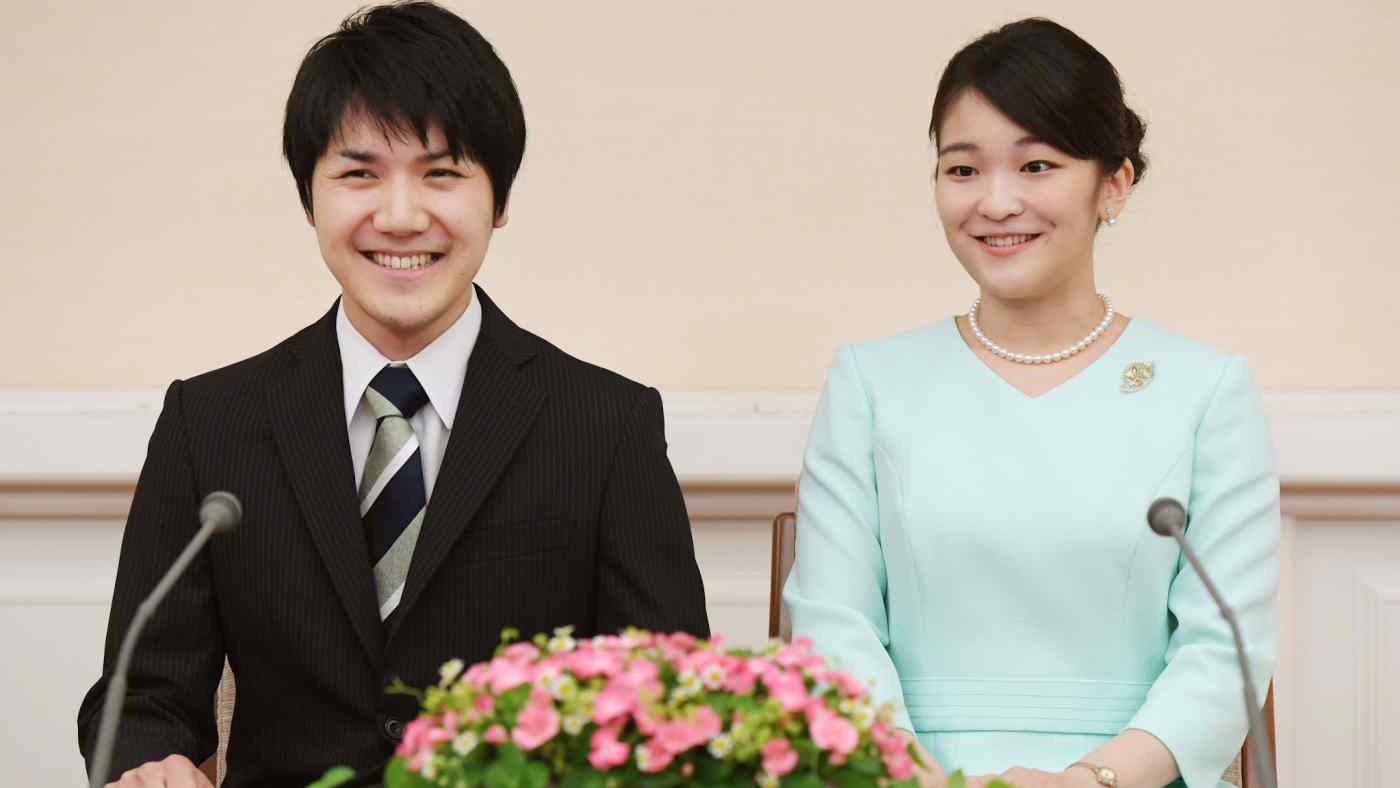 TOKYO (Kyodo) -- Princess Mako, a niece of Japanese Emperor Naruhito, and her boyfriend Kei Komuro will marry by the year-end and may start a new life in the United States, but without holding the related ritual ceremonies in a rare decision, a government source said Wednesday.

Amid public unease about their marriage due to a money dispute between Komuro's mother and her former fiance, the princess will likely decline a lump-sum payment of up to about 150 million yen ($1.36 million) usually given to female royal family members upon their departure from the household, the source said.

Under the current rules, female imperial family members lose their royal status upon marrying a commoner. The marriage of the princess and Komuro, both 29, has been postponed for over two years due to the dispute over 4 million yen that the former fiance claims the mother owes him. The sum includes money spent on Komuro's educational expenses.

If the princess marries Komuro without traditional ceremonies, she would be the first female imperial family member to skip them in postwar Japan.

The rites are an official engagement ceremony called "Nosai no Gi," in which the families of the betrothed exchange gifts, and a "Choken no Gi" ceremony to officially meet with the emperor and empress before marriage.

The Imperial Household Agency will consider whether it is possible under current rules not to offer the lump-sum payment, which would be financed by taxpayers' money, in accordance with the princess's request.

Komuro currently lives in the United States, having graduated from Fordham University's law school in New York State with a Juris Doctor degree in May and taken the state bar examination in July. The result of the exam will be announced by mid-December and he is expected to land a job at a local law firm.

Crown Prince Fumihito, the emperor's younger brother, has said he approves of his daughter's marriage to Komuro but suggested it has to be welcomed by a so-far skeptical public.

"I mean, I approve of them getting married. The Constitution says marriage shall be based only on the mutual consent of both sexes. If that is what they really want, then I think that is something I need to respect as a parent," the crown prince said last November at a press conference to mark his 55th birthday.

In April, Komuro issued a statement seeking to correct what he called misunderstandings among the public about his mother's financial status and said his wish to marry the princess has not changed.

Princess Mako, who said last November the marriage is a "necessary choice" for the couple, indicated her hope that the statement to address the monetary dispute would help gain more public understanding of his stance.

"I would appreciate it if people could understand there were various circumstances (behind the dispute) by reading the document," the princess was quoted as saying by an official of the Imperial Household Agency.

Shortly after releasing the statement, Komuro offered to make a payment to his mother's former fiance in an effort to settle the money dispute.

The former fiance also expressed his desire to enter negotiations, saying the planned marriage and the dispute were separate issues. But there has been no progress in efforts to settle the case since then.

The couple's marriage may influence Japan's ongoing debate to address a shrinking number of imperial family members as the government is considering allowing female members to retain their royal status even after marrying commoners.

Princess Mako's brother Prince Hisahito, 14, who is second in line to the Japanese imperial throne, is the only heir of his generation as the Imperial House Law states that only males with male lineal descent from emperors can ascend the Chrysanthemum Throne.

Komuro and Princess Mako, Crown Prince Fumihito's eldest daughter, met in 2012 as students at International Christian University in Tokyo. They were unofficially engaged in September 2017.

Komuro, who previously worked at a Tokyo law firm as a paralegal, started studying at the New York law school in August 2018 after his planned marriage with the princess was abruptly delayed following reports of the financial dispute.