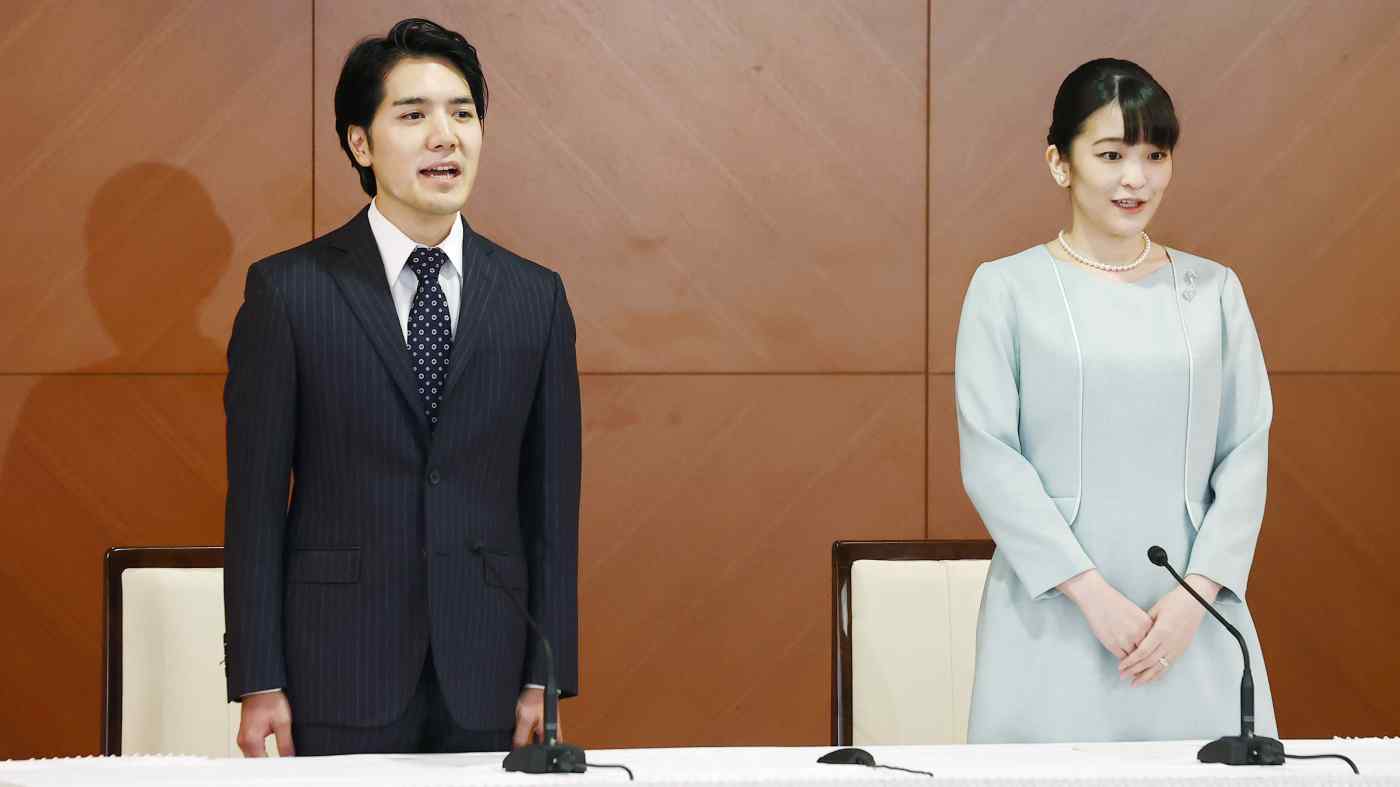 TOKYO (Kyodo) -- Japan's Princess Mako married her commoner boyfriend Kei Komuro on Tuesday, the Imperial Household Agency said, the union coming after years of controversy over a financial dispute involving his mother that led the couple to forgo traditional ceremonies associated with a royal marriage.

Princess Mako, a niece of Emperor Naruhito, abandoned her royal status and became Mako Komuro under a family registry with her university sweetheart as the agency submitted legal paperwork to register the couple's marriage on their behalf Tuesday morning, four years since their relationship was made public.

The newlyweds, both 30, appeared together in front of the press in the afternoon for the first time in about four years but only gave opening remarks and distributed written answers to five selected questions submitted by the media, instead of a usual press conference.

The decision was made as the princess, who has been suffering from a mental health condition following a string of media reports about the financial dispute, "feels a strong sense of anxiety" imagining having to answer questions verbally, the agency said in a sudden announcement on Monday night.

The princess said Komuro is an "irreplaceable" person and that their marriage was "a necessary choice," in her opening remarks to the press.

Amid accusations on social media that they are wasting taxpayers' money, the couple paid the rent of a hotel room themselves for the press event.

"If I have to pick the biggest concern, it would be continued libel" against the couple and their families, the princess said in a statement in answering one of the questions about possible worries for the future.

Princess Mako declined to elaborate on her new life with Komuro in New York, where she is expected to relocate. "What I would like is just to lead a peaceful life in my new environment," she said in the statement. Komuro works at a law firm in the city.

She forfeited her royal status as the Imperial House Law stipulates that a female imperial member must abandon her title if she marries a commoner. The agency will register her departure on the record of imperial lineage on Wednesday.

Following the couple' marriage, Princess Mako's parents -- Crown Prince Fumihito and Crown Princess Kiko -- said in a statement that their eldest daughter's marriage was "unprecedented for the imperial family," adding they hope she will cherish the feelings she has built up over time and make a happy family.

The princess, who left her family's imperial residence Tuesday morning, is set to stay in a Tokyo condominium while preparing to move to New York.

Wearing a light green dress and holding a bouquet of flowers, Princess Mako bowed several times to her parents and her younger sister Princess Kako as she left the residence in Tokyo at around 10 a.m.

The sisters hugged each other before Princess Mako entered a car and left for a Tokyo hotel to meet the press with her husband, while her family waved until she was out of sight. Some 10 agency officials were also there to send her off. Since Japanese imperial family members do not have passports, the princess needs to apply for hers as an ordinary citizen. She is expected to leave for the United States next month at the earliest.

In light of the controversy over the marriage due to the still-unresolved money dispute between Komuro's mother and her former fiance, a series of traditional ceremonies associated with imperial members' weddings were not held. While female royal family members traditionally receive a lump-sum payment of up to around 150 million yen ($1.3 million) drawn from the country's tax coffers upon their departure from the imperial household, the agency said it has accepted Princess Mako's request to decline the payment.

The unprecedented decisions came as Crown Prince Fumihito maintains the view that many Japanese people remain unconvinced by the marriage and therefore the traditional ceremonies should not have been held, according to the agency.

The couple's marriage has come under intense public scrutiny as Komuro has so far failed to convince a vocal section of the Japanese population how his family would resolve the dispute over 4 million yen, which includes money spent on his education.

Komuro said in a 28-page statement in April that he and his mother believe the money they received was a gift, but proposed making a settlement payment to the former fiance shortly afterward.

He said at the press conference Tuesday he will do "whatever possible" to resolve the matter and that he hopes the former fiance will receive the settlement money. Komuro's mother cannot accept the man's request for a meeting because of her mental health condition, Komuro added.

With tabloid magazines and TV talk shows obsessing over the issue, the couple and their families have been the target of constant criticism on social media.

The agency revealed earlier this month that Princess Mako has been diagnosed with complex post-traumatic stress disorder caused by what she described as psychological abuse the couple and their families received.

The couple met each other in person last week for the first time since Komuro left for New York in August 2018 to study at Fordham University's law school. He graduated with a Juris Doctor degree in May this year.

Komuro and the princess met in 2012 as students at International Christian University in Tokyo and were unofficially engaged in September 2017.

Their wedding was initially scheduled to take place on Nov. 4, 2018, but the agency announced in February of the same year the postponement of ritual ceremonies following reports about the financial dispute.