Japanese students injured in stabbing at University of Tokyo 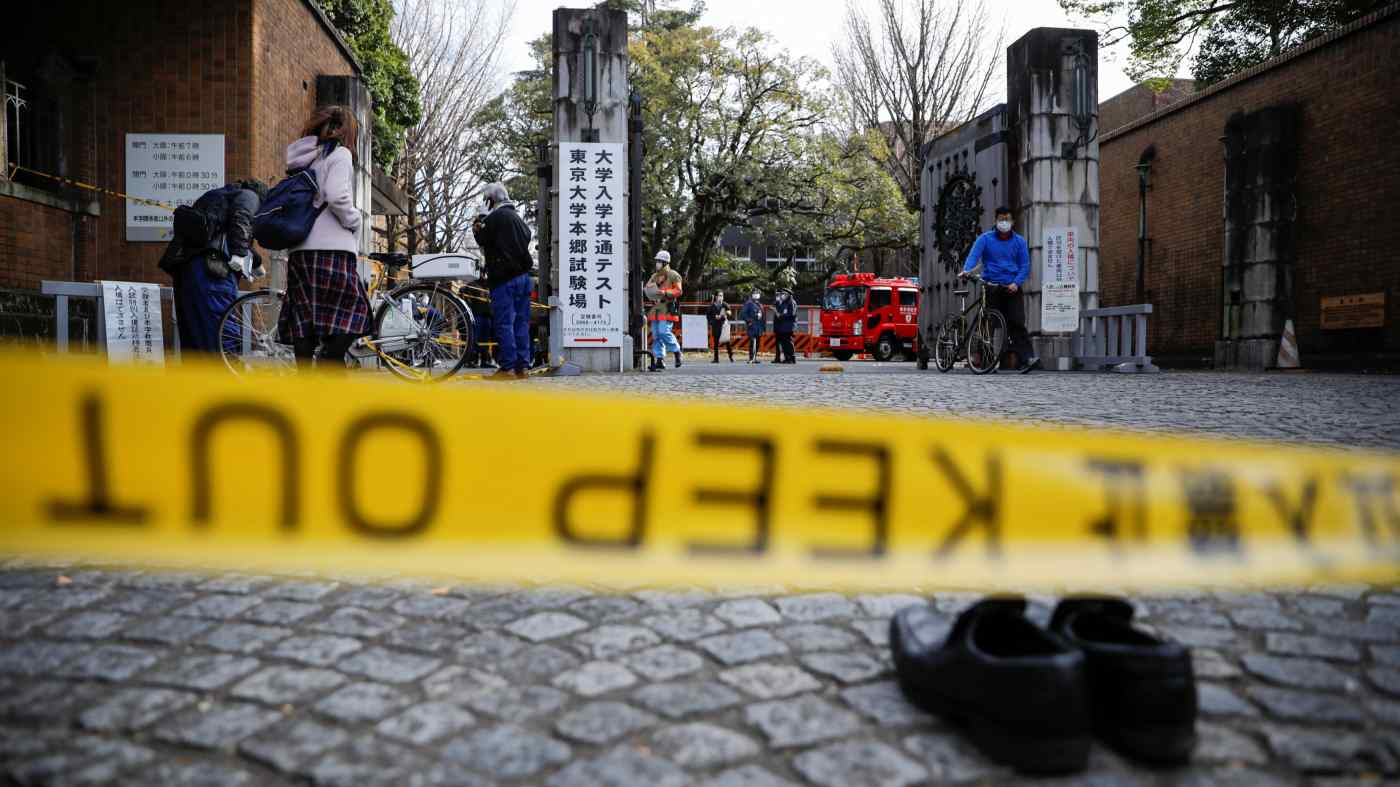 TOKYO (Kyodo) -- Two high school students and a man were wounded in a knife attack on Saturday just outside the University of Tokyo ahead of nationwide entrance exams and a teenager apparently frustrated with his academic performance has been arrested on suspicion of attempted murder, police said.

The 72-year-old man was seriously injured after he and the two students, aged 18 and 17, were slashed in their backs around 8:30 a.m. in front of one of the gates to the university's main campus, according to the police.

The male and female students, both traveling from nearby Chiba Prefecture to take the exams, did not sustain life-threatening injuries, with the police quoting the 17-year-old suspect as saying he was not acquainted with the three, who were walking on the sidewalk separately.

"I was not doing well in my studies so I wanted to cause an incident and die," said the suspect, a student at a private high school in Nagoya in central Japan who was not going to take the exams, after he was arrested, according to the police.

"I was studying for the University of Tokyo to become a doctor, but my grades have been poor for a year and I lost confidence," the teenager, who has confessed, was also quoted as saying.

The attacker has told the police he came to Tokyo by an express bus that was to arrive in the capital at around 6 a.m. on Saturday, an investigative source said, adding that his parent notified local police on Friday night that the son was missing.

According to the police, the attacker also said he had brought a knife from his home. A bloodstained one was found near the university, which is considered one of the most prestigious in Japan.

When police officers arrived at the scene shortly after the incident, he was sitting on the ground, and his knife, with a 15-centimeter blade, had been confiscated by a security guard, they said.

The attack occurred as Japan's two-day unified university entrance exams, sat by more than 530,000 applicants, began nationwide amid concerns over the rapid spread of the Omicron variant of the coronavirus among students and their family members.

Despite the incident, the University of Tokyo, one of more than 650 test venues, conducted the first day of the annual exams as scheduled.

The quick arrest was possible because the 72-year-old man from Tokyo rushed to a nearby police box, they said.

The attacker was also quoted as saying he started a fire at a station near the campus before the incident.

The Tokyo Fire Department said it was alerted to a fire within the premises of Todaimae Station on the Namboku Line operated by Tokyo Metro Co. at around 8:30 a.m. and that it was extinguished around an hour later.

The attack appeared to unsettle some test-takers at the venue, to which police and firefighting vehicles were mobilized. The incident occurred outside the gate of the Yayoi section of the main campus of the university.

An 18-year-old test-taker said he learned about the incident via Twitter. "It has become a big incident and it's scary. I want to do my best in the test and not be affected," he added.

Another test-taker, an 18-year-old high school student from Tokyo, expressed her anxiety over the incident at a time when people are already feeling jittery about the coronavirus.

A woman in her 50s who accompanied her son to the exam venue said she hopes her son will not be shaken by the incident. "He studied so hard (for this) so I wanted him to be able to take the test in a good environment," she said.

In light of Saturday's incident, the National Center for University Entrance Examinations urged the state-run, public and private universities that are the venues for the exams to beef up security measures.

The exams, conducted amid anti-COVID measures, drew a total of 530,367 applicants and are taking place at 677 venues.

In Japan, standardized university entrance exams are held annually in two stages, with the first standardized for all universities and the second involving university-specific exams.