MACAO -- For more than a century and a half, people have visited Macao to gamble and afterward largely took any related troubles back home with them.

But the transformation since 2002 that has seen Macao's gambling market explode into the world's largest and the number of casinos almost quadruple has increasingly forced local policymakers to acknowledge that gambling is a source of social problems for their city, too.

"There used to be a myth that Macao locals would not go to the casinos," said Jackie Wu, who runs the S.K.H. Gambling Counseling and Family Wellness Centre. "But in fact, it is common. In my experience, (gambling) debts of over 100 million Hong Kong dollars ($12.83 million) are normal.

"Even among my own relatives there are problem gamblers," she said. "One of my ex-boyfriends was a gambling addict. We broke up because of this problem."

Local gamblers are set to be the center of attention for a while as measures to control the spread of the Wuhan coronavirus have brought visitor traffic into the city down to a trickle. Most of the city's casinos reopened Feb. 20 after a 15-day mandatory shutdown but travelers have yet to return, with bureaucratic barriers still cutting off the most popular visitor channels from mainland China and Hong Kong.

Rising concern about gambling addiction has seen eight counseling centers open in Macao since 2004, mostly with government funding, and the formation of an official task force. The admission age for locals into casinos has been raised to 21 from 18.

Officials also set up a registry for problem gamblers and a separate system for residents or their close relatives to put their names on a casino "no-admit" list. Community groups have launched programs to warn members of the risks of gambling, especially for youth.

"There were clear signs that the group most afflicted by problem gambling were dealers and other casino staff and that this was negatively affecting their family and social lives," said Carlos Lobo, a former adviser to the Macao Gaming Commission. "The negative impact of locals' gambling was quite significant and disproportionate vis-a-vis the financial benefit for casinos." An earlier law already barred the city's roughly 36,000 government employees from casino floors. Excluding temporary workers from elsewhere, Macao has a population of about 480,000.

Industry watchers see growing odds that the government will impose so-called responsible gambling obligations on casinos when new operating concessions are issued for 2022 and beyond. With speculation rising about the existing six concessions set to expire, the administration is expected to lay out plans for revising the city's gaming law later this year.

Said Samuel Huang Guihai, director of Macao Polytechnic Institute's School of Business and a member of the government's Responsible Gambling Task Force, operators "will likely have to follow some international standards such as RG Check," referring to Canadian-developed guidelines for insuring that casinos address problem gambling and promote responsible betting.

With its casinos crowded with such visitors, it was easy for Macao to be complacent about locals' play while governments in other Asian casino markets like Singapore and Cambodia put up significant entry barriers for their citizens.

In this void, some Macao residents fell into addiction gambling. Speaking to the Nikkei Asian Review, one who has gone through counseling said he used to bet in the casinos almost daily.

"When you win money, everyone thinks you are the god of gambling," he said. "But even when I won a lot, I could not let my family know and I would hide the money. However, I would usually lose all the money again within a week."

Finally, his wife's request for a divorce prompted him to seek help. "I have to admit the things I lost, including money and the relationship with my wife, cannot be regained but now I am trying to rebuild my life," he said.

Several casino operators have introduced their own problem gambling programs. 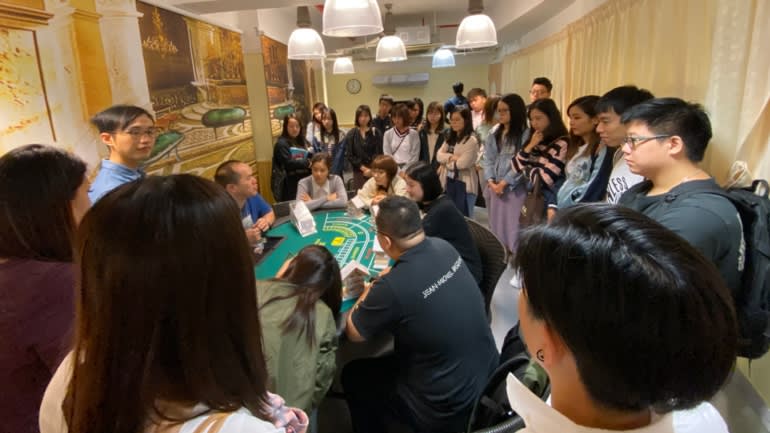 "We will continuously devote our efforts and resources to promote responsible gaming to Macao locals and visitors as well as to our team members," said Sands spokeswoman Mabel Wu.

Some measures suggest the increased focus on problem gambling may be having an impact. A triennial survey conducted by the University of Macao's Institute for the Study of Commercial Gaming last year found the incidence of problem gambling among city residents had declined to 0.8% from 2.5% in 2016. New entries to the government's problem gambling registry have also been falling since 2017.

Wu, the S.K.H. counselor, is skeptical the situation is improving. "I think it is hard to get an accurate number of how many residents battle with problem gambling," she said. "Macao is a tiny city [and] a lot of people are too afraid to seek help as they are ashamed of the stigma that comes with problem gambling."

"It is just white noise," he said. "They have to promote responsible gaming just as they have been promoting their attempts to diversify or invest in nongaming (attractions). However, whenever they talk about this, the locals just roll their eyes."

Legislator Jose Pereira Coutinho is more circumspect about the city's policy direction. "Responsible gambling is never-ending work not only implemented by the Macao SAR government but also [by] positive actions implemented by gaming concessionaires," he said.