BEIJING -- Young people in China are steering clear of marriage and the number of weddings has dramatically declined in recent years, posing serious demographic and planning challenges for President Xi Jinping's administration.

China's government is alarmed by the prospect of declining birthrates giving rise to an aging and shrinking population.

The 2020 decrease in marriages of more than 1 million was partly attributed to the COVID-19 pandemic, but after two record years there is no sign of any recovery in 2022.

Marriages peaked at 13.46 million in 2013, the year Xi became president, but have been sliding down ever since.

An important contributing factor is that women in urban areas have become more independent economically, and feel less material need to get married.

"My parents take care of my child at their home in Beijing," Song, a single mother in her 30s, told Nikkei Asia. "As I live without any economic problems, I have never felt the need for a husband."

Song studied in Japan and now works in another part of Beijing. Her child is still preschool, and she has no plans for a second one. In China, grandparents often care for their grandchildren, and this is another reason husbands are increasingly regarded as unnecessary.

Meanwhile, men living in rural areas remain keen to have wives to help with family businesses and to raise children who will eventually take over. But the division of the sexes living in urban and rural areas continues to widen. 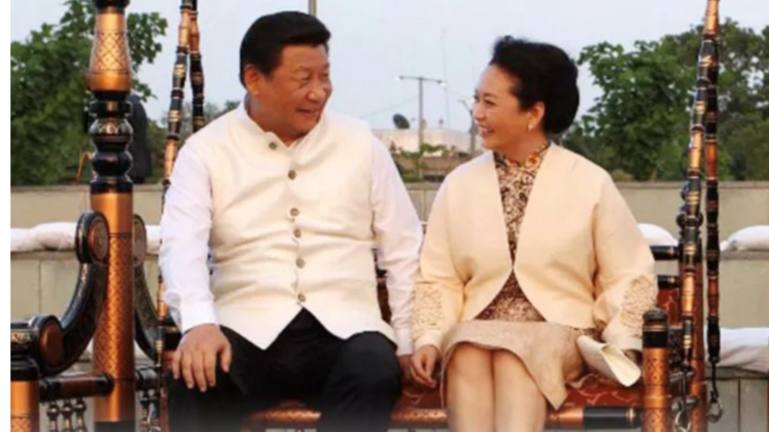 President Xi Jinping and his wife, Peng Liyuan, only have one child, their daughter Xi Mingze. (Captured from the website of CCTV)

"Dear Child," a popular TV series that depicts marital conflict over having children and bringing them up has stoked controversy. The series revolves around a young couple whose relationship deteriorates after their child is born. They quarrel over their parents' involvement in running the house, the burdens of child rearing and treatment of the child when it is sick.

The Chinese authorities became concerned that Dear Child would further discourage marriages. The April 11 online edition of the People's Daily, the official organ of the Chinese Communist Party, carried a commentary warning against TV dramas that "sell anxiety."

"There is also a view that it is not appropriate to depict family clashes and contradictions this much," the article said.

Before being aired, programs are all strictly vetted by the Propaganda Department of the Chinese Communist Party, so it is unusual for the authorities to have anything further to say. On this occasion, it caused a backlash that only fueled the controversy.

"This is a common scene," said one viewer. "The reality is more miserable."

Fewer marriages translates into fewer births, meaning that the government may be facing a downward spiral.

Its unexpected response was not to increase marriages but to try and reduce the number of divorces. In 2021, a cooling-off period was introduced for couples applying to divorce.

Divorce applications could be withdrawn during a 30-day period after being filed. And if the couple did not request the actual divorce certificate after that time, the application was deemed to have been withdrawn. In 2021, the number of divorces nearly halved from a year earlier to 2.13 million.

Last year, the government introduced a policy of allowing couples to have a third child. Even so, the decline in births has shown no sign of abating in 2021. The number fell by 1.38 million to 10.62 million in what was the fifth consecutive annual fall.

In theory, everything that happens in China is guided by the CCP, but young people's changing attitude toward marriage appears to be beyond official reach.