NEW YORK -- With looting and violence spinning out of control, New York City has extended its nighttime curfew on nonessential workers through Sunday.

The curfew initially imposed Monday for 11 p.m. to 5 a.m. -- the first such order since 1943 -- will now start at 8 p.m. as of Tuesday. Similar restrictions have been ordered in Washington, D.C., and Los Angeles.

"Some people are interested in actually protesting, but most are now just rushing to destroy things with no regard for racial problems," a 33-year-old African American man said in Manhattan on Tuesday as he photographed vandalized storefronts.

Tuesday marked the eighth day of protests over the death of an African American man at the hands of a white police officer in Minnesota. Resentment over weeks of coronavirus lockdowns has contributed to the rapid escalation of violence across the U.S. Police and military moves to curb demonstrations have only added to the tensions.

"I've been having discussions about race with my friends," a 32-year-old white woman said. "We need to be wiser." Midtown Manhattan, in New York City, saw many stores vandalized ahead of the 11 p.m. curfew on June 1. Mayor Bill de Blasio decided the next day to bring the curfew forward three hours. (Photo by Yumiko Oshima)

Day One of the Big Apple's curfew went far from perfectly. After the order took effect at 11 p.m., "sirens were blaring all night and youngsters were running around," a property management employee working late shift told Nikkei.

"Macy's at 34th. Street, long the largest single department store anywhere in the world, & a point of pride in NYC, was devastated yesterday when hoodlums and thieves vandalized it, breaking almost all of its large panels of storefront glass," Trump tweeted Tuesday. "What a shame. Bring in National Guard!"

The violence is intensifying, including incidents of police officers being hit by cars. The New York Police Department reportedly arrested around 700 people on Monday night alone.

Starting at 8 p.m., "before it gets dark, we think will magnify our ability to control the situation," he said in a press briefing Tuesday.

No lives have been lost to the unrest so far, and the city will proceed with its planned partial reopening Monday from the coronavirus lockdown, de Blasio said. 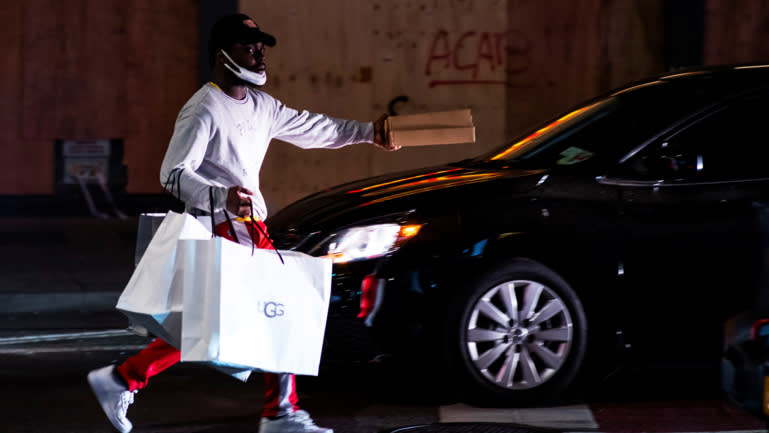 A man carries merchandise, apparently from an Ugg shoe store, in New York City's borough of Manhattan on June 2.   © Reuters

Supermarkets have shifted to new operating hours. Liquor stores that had been allowed to operate as essential services have had to close, with many putting up wood panels on windows to prevent attacks.

"The NYPD and the mayor did not do their job last night," he said, adding shortly thereafter that "I believe the mayor underestimates the scope of the problem."

More than a week since George Floyd died after an arresting officer knelt on his neck in Minneapolis, Minnesota, the protests across the U.S. show no sign of abating.

In California, the curfew is set from 6 p.m. through 6 a.m. in Los Angeles. Santa Monica, a suburb that saw particularly intense rioting, has a curfew of 2 p.m. through 5 a.m.

In the nation's capital, people are instructed to go home by 7 p.m.

In Atlanta, Georgia, two police officers were fired and charged after a video emerged showing them pulling two young people from a car and shooting them with stun guns.

Many police officers were injured as well, including through shootings in St. Louis and Las Vegas.