The survivors of Japan's employment "ice age" of the 1990s and early 2000s, many of them still frozen out of the regular job market, demonstrate how long the damage can last.

Naoaki Kimura, who began working in January at the social services department of the city of Takarazuka, knows all too well how it feels to have one's life derailed by a bad economy.

More than 20 years of drifting through an unwelcoming job market now help him empathize with furious residents and consider the lives and family circumstances that have brought them to this point.

"I listen closely to what each and every person has to say while hoping to help them see things a little more positively," the 45-year-old said.

Kimura entered the job market in 1998, amid drastic cutbacks in corporate hiring that followed the bursting of the economic bubble of the '80s. The country was filled with students who had left school without a single job offer -- a grim fate in a market still heavily reliant on hiring of fresh college graduates. 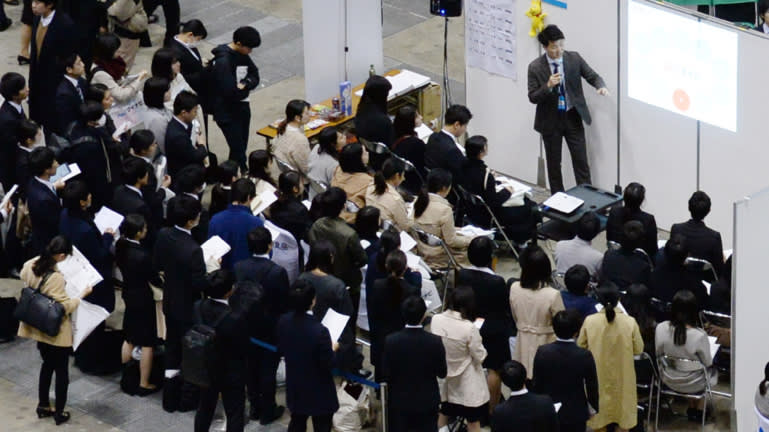 Kimura tried applying to 50 or so companies, including in manufacturing and finance, hoping for a bite from a big employer. He received just one job offer -- from a company that he could not imagine himself working for.

The next year, Kimura sent out the same number of applications and did not end up with a single offer. After two years of searching, he was hired as a full-time employee at a convenience store and felt ready to begin working at last.

But he was not prepared for how it would affect his life. Kimura's phone rang early in the morning and late into the night with calls to rush over to his store. He even had to buy large numbers of Christmas cakes and seasonal summer gifts to meet sales quotas.

Unable to cope, Kimura quit and hopped between jobs as a contract employee. While searching for positions, he once had an interviewer take a call mid-interview. Naturally, he was not hired for that job.

Kimura began to resent the job shortage he had been thrust into, feeling that no one would listen to him.

He eventually found employment as a nonregular government worker, which came with constant worry about whether he would still have a job the following year. Ashamed of his inability to get his life off the ground, Kimura fell out of touch with friends from high school and college who had snagged full-time positions.

Last July, Kimura's sister let him know that Takarazuka was specifically recruiting members of the ice age generation. Even after finding that the city planned to hire only three people, he decided to apply, seeing his experience in the public sector as an advantage.

Takarazuka received 400 times as many applications as there were openings. Kimura had a good feeling about his performance on the written exam but fared worse than he expected in the interview. "I thought I was out," he said.

He could hardly believe it when he was called in for the final round. This might be fate, he thought. Member of the so-called employment ice age in Japan take part in a ceremony after being hired by the city of Takarazuka.

Before the last interview, Kimura, who came from Nara Prefecture and had no ties to Takarazuka, drove around the city, struck by its quiet, greenery-filled residential streets. When he saw smiling residents relaxing on benches in the park, he knew he wanted to support the city.

There was no point in resentment, he thought, and resolved to look forward. He came out of the interview feeling lighthearted, with the sense that he had done all he could.

The results came by mail in mid-November. Upon nervously opening the envelope, Kimura saw the word "accepted." He was happy, but more than anything else, he felt relief.

The new Takarazuka resident is now three months into the job. Because of the years he spent feeling like no one would listen, he believes strongly that "I need to lend an empathetic ear to the people here." He can spend as much as an hour on a single call.

After two decades, Kimura has built a new life for himself in his mid-40s. "Seeing me working may motivate people of my generation to try again," he said.