WASHINGTON/NEW YORK -- Black people have died from the coronavirus at double the rate of their white counterparts, and their 16% unemployment rate is running much higher than the rest of the population.

Those underlying social and economic disparities are adding to the anger of protesters railing against the killing of George Floyd, a 46-year-old black man, by a white police officer in Minneapolis, the biggest city in the state of Minnesota.

As the protests continued, President Donald Trump has maintained a hard-line stance, calling for aggressive police action in a conference call with state governors Monday. He labeled Minnesota a "laughingstock all over the world" for what he sees as a bungled response to the disturbance.

On Sunday, demonstrators descended on the White House while sporadic looting and arson took place in the rest of the nation's capital. When protestors returned near the White House on Monday, police and national guard members made good on Trump's threat, using tear gas and flash bang grenades to clear the crowd.

Out of the nearly 1,100 Americans killed by police last year, according to private-sector estimates, black people accounted for 24% of the fatalities, or double the share of the national population. 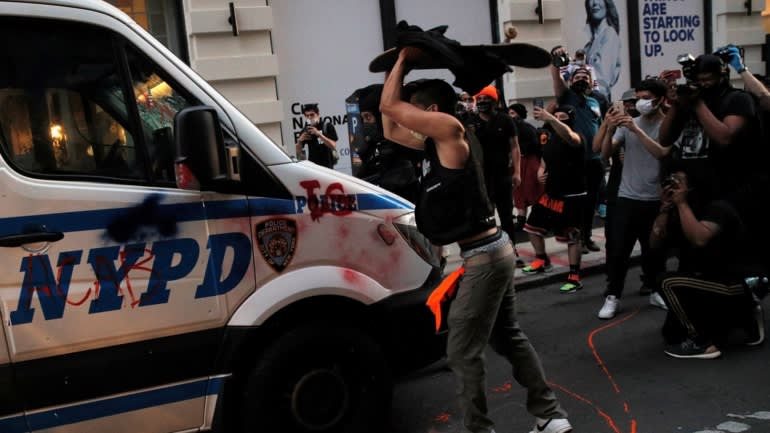 Police violence against black people has often lead to violent protests, such as the 1992 riot in Los Angeles. This time, the coronavirus epidemic and the historic jobless rate has been added to the powder keg.

"George Floyd, COVID-19 and income inequality ... the overwhelming majority of victims are black. We cannot take it anymore," said a protester at the White House on Sunday who identified herself as Jennifer.

In Washington alone, black people make up nearly 80% of the roughly 460 coronavirus deaths. The city's unemployment rate reached 11% in April, but the mostly-black southeastern district recorded a jobless rate of 20%.

Nationwide, the black death rate from COVID-19 stands at 54.6 people per 100,000, more than double the white death rate of 22.7 people. The black unemployment rate has topped 16%, or 2.5 points higher than white people.

Around the White House, demonstrators raised placards calling for rent forgiveness and for expelling the affluent. Mingling in the crowd are baseball bat-wielding youths, who have been accused of looting stores. The economic disparities have a direct link to the current social disturbances. 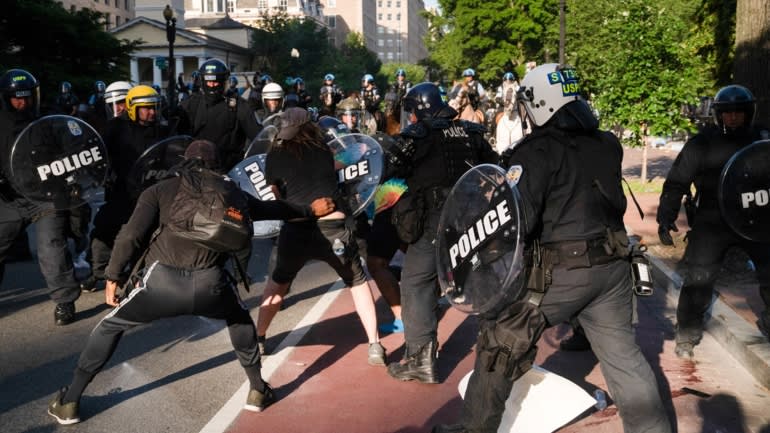 Almost 40% of households earning less than $40,000 lost their jobs in March, Federal Reserve Chairman Jerome Powell said last month, citing a Fed survey. Most of the people who lost their jobs worked in restaurants or in retail, two low-income industries that have been slammed by the epidemic.

In 1992, the year of the L.A. riots, the country was in the middle of a downturn. In 1991, the economy shrank for the first time in nine years, and in 1992 the unemployment rate exceeded 7%. The income disparities and economic anxiety echo in the past and present.

The U.S. economy attained its longest expansion on record under Trump's presidency, but the income inequality has grown to level's not seen in the postwar era.

Both New York and Washington issued curfews on Monday. Restaurants that have just reopened from coronavirus shutdowns were forced to close their doors again due to the disturbances. On Sunday, customer traffic at restaurants in Dallas, Texas, wallowed at roughly 20% of the year-earlier number, according to restaurant booking site OpenTable. Just two days earlier, the ratio bounded back to 40%, but Sunday's curfew reversed the gains.

The U.S. economy is projected to shrink by an annualized 40% in the second quarter. There was hope the economic re-openings by states would provide a ray of hope for businesses, but the protests looks to create another millstone.