When the clock strikes 5, Japan's workforce goes back to work 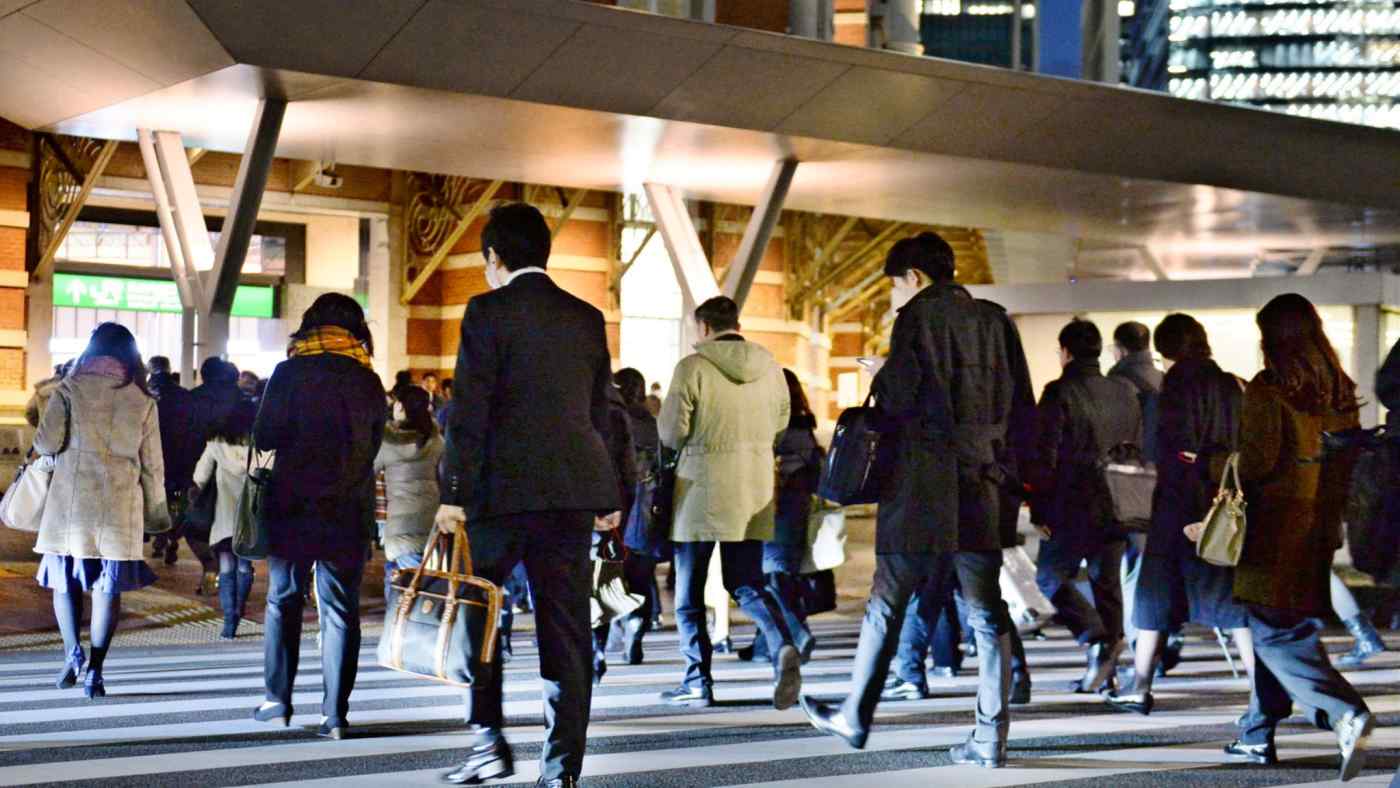 TOKYO -- The push to reduce overtime in Japan is starting to have wide-ranging effects on Japanese society, from shifting traffic patterns to boosting part-time work six months after a law was passed to improve the country's notoriously lacking work-life balance.

Total overtime by Japan's workers fell year-on-year for the 14th straight month in August, according to the Labor Ministry. A close look at mobile tracker data, provided by NTT Docomo unit Docomo InsightMarketing, sheds light on where they are spending their time outside the office.

Otemachi, a Tokyo district where many major corporations have headquarters, sees a daily exodus of nine-to-fivers. On a typical weekday this April, its daytime population minus residents fell to 55.4 by about 5 p.m. from a baseline of 100 at 11 a.m.

Nishi-Shinjuku, where the Tokyo Metropolitan Government offices are located, saw a drop to 46.1 by about 5 p.m. Both figures are lower than they were two years prior, at 56.8 and 48.6, respectively.

Encouraged to leave the office on time, workers now appear to be hitting restaurants and bars earlier than they used to. The population index at about 5 p.m. in Kabukicho, one of Tokyo's biggest entertainment districts, rose to 184.2 this April from 181.5 in April 2017. Full of bars and restaurants, Kabukicho is a popular after-hours destination for Tokyo office workers.

This also means people are headed home earlier. Mapping app Ekispert, operated by Val Laboratory, has seen an uptick in searches for routes originating from big Tokyo stations at 5 p.m., but users have gone down after 9 p.m.

However, the push to reduce overtime has not always translated to less work. Some are now headed to hybrid bar-cafes after leaving the office, not to unwind but for some coffee while they wrap up unfinished business. One chain saw a 1% increase on the year in customers after 6 p.m. in the July-September.

Average monthly overtime fell from 46 hours in 2012 to 28 hours last year, according to OpenWork, a Tokyo-based job review platform. If overtime pay is assumed at 1,500 yen ($13.80) an hour, that would equate to a decrease of about 27,000 yen in monthly overtime pay.

Workplace reforms are due to erase 2.1 trillion yen in overtime pay this fiscal year, according to estimates from the Daiwa Institute of Research. However, only a few companies return lost overtime pay back to employees.

About 30% of people report having less than 10,000 yen worth of spending money per month, according to a survey by internet service provider Biglobe. That has fueled an increase of company workers who take side jobs for the extra pocket money and to open new career paths.

Street Academy, a Tokyo startup behind the platform of the same name that pairs experts in a given field with individuals seeking to learn, has witnessed registrations grow by the year. Teaching roles increased to 22,900 in September, up 36% from the end of last year.

"The increase in free time due to the flexible working schedules, which owes to the work-style reforms, has led to the increase in registrations for the service," said a Street Academy representative.

Crowdsourcing provider CrowdWorks reports 3.16 million people registered on its platform in September, up 35.8% from last year and about triple the number in 2016. Permanent salaried employees who take on gig jobs make up a fifth of those registered, said CrowdWorks.

Improving productivity by helping individuals find satisfaction in their work is a central element of the work-reform drive.

Japanese workers safely ensconced in the lifetime employment system had little opportunity to go out and learn new things. But as overtime declines, many are investing newfound free time in education.

Globis University Graduate School of Management saw enrollment in its MBA program grow 9.3% this academic year to about 900 students -- its fastest growth since the 2015-16 academic year. The school, operated by education company Globis, holds classes on both weekday evenings and weekends.

"Saturday nights had the most people before, but lately, weekday night classes are filling up first," Dean Yoshihiko Takubo said.

As the lifetime employment system crumbles, "there's a fear that if you don't keep learning throughout your life, you won't eat, so more people have a desire to learn," he said.

Interest is growing in certification tests as well. College graduates 30 or older comprise 59.5% of members this year at Tokyo-based Agaroot, which helps customers prepare for particularly difficult exams. This is up about 2 percentage points from 2018.

With work days ending earlier, many want to take on other challenges, according to the company.