SEOUL/TOKYO -- South Korea's new president, Moon Jae-in, said Wednesday he is willing to visit North Korea under the right conditions. He also said he is prepared to negotiate over a contentious missile-defense system deployed in the country by U.S. that Beijing objects to.

Moon did not elaborate on his ideas for reducing tensions on the Korean Peninsula after taking the oath of office at the National Assembly on Wednesday, but a more conciliatory approach to North Korea could shift the geopolitical balance in the Northeast Asia.

At an afternoon news conference, Moon named Lee Nak-yon, a pro-Japanese politician and governor of South Jeolla Province, as his prime minister. Lee was a senior member of Moon's campaign strategy team during the previous presidential election in 2012.

In order for the prime minister to take office, he must be confirmed by a majority of lawmakers present in the National Assembly. Ministers in the outgoing government are likely to remain at their posts for a while, as confirmation of Moon's cabinet by the lawmakers will take time.

Moon was officially declared the country's 19th president after the election commission finished counting the votes Wednesday morning. The Democratic Party of Korea leader won 41.08% of all votes cast. Hong Joon-pyo of the former ruling party Liberal Korea Party finished second with 24.03%. Ahn Cheol-soo of the People's Party came in third with 21.41%. 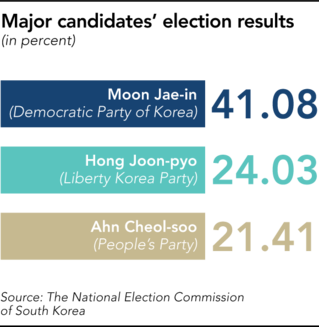 On Wednesday morning, Moon called Lee Sun-jin, chairman of the military's Joint Chiefs of Staff, asking him to brief him on the status of the North Korean armed forces and the South's preparedness. This was his first official act as president.

Moon also visited a national cemetery in the capital where former presidents and some of those killed in the Korean War are buried.

Moon said late Tuesday that he would work with other presidential candidates as his administration moves forward, calling for cooperation from other political parties.

Moon's Democratic Party of Korea has 120 seats in the 299-member assembly. This may pose problems for Moon as he seeks to put his program into place. In South Korea, the president serves a single five-year term.