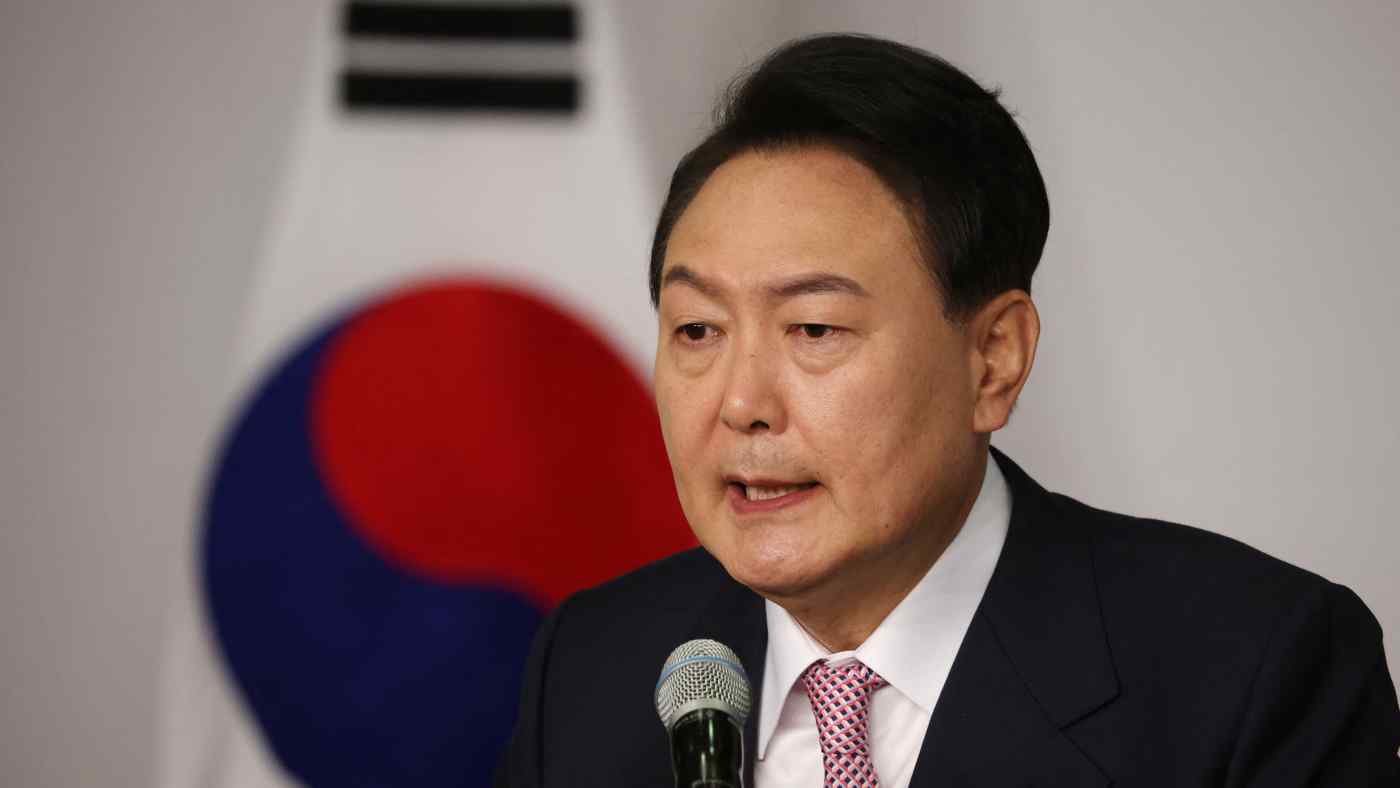 Yoon, who will be inaugurated in May, beat Lee Jae-myung, a leftist from the ruling Democratic Party by a tiny margin of 48.56% to 47.83%.

Nikkei Asia followed the race and results through the night. See our South Korea Election landing page for the latest developments.

11:30 a.m. President-elect Yoon says he will build a strong defense against a rising North Korean nuclear threat, but leave the door open for dialogue with Pyongyang.

10:25 a.m. Japanese Prime Minister Fumio Kishida congratulates Yoon Suk-yeol on winning the election, expressing hope to improve relations that have been strained over wartime issues. "I intend to closely work with the new president to improve Japan-South Korea ties," Kishida tells reporters, stressing a healthy relationship between the neighbors is crucial for global peace and stability.

4:42 a.m. "It was a hot and passionate race. It was the victory of the great [South Korean] people rather than that of me and the People Power Party," Yoon said after the race was decided. "The competition is over, and it's time to unite for people and the Republic of Korea."

3:30 a.m. KBS has called the election for Yoon, with a 99% probability. Both candidates are now heading to their respective camps to make speeches. Will be interesting to see whether Lee concedes.

8:40 p.m. While waiting for results to start coming in, look at the JTBC cable channel using an AI version of former dictator Park Chung-hee discuss the election.

7:40 p.m. An exit poll conducted jointly by three major broadcasters of KBS, MBC and SBS had Yoon ahead of Lee by just 0.6 percentage points -- within the margin of error. Yoon had 48.4%, Lee had 47%, and Sim Sang-jung of the leftist Justice Party was third with 2.5%.

7:30 p.m. Polls close. The ballot for the general public ended at 6 p.m., with the last 90 minutes of voting reserved for people with COVID-19. The nation is currently seeing a surge in cases.

3 p.m. Turnout was higher than in 2017 as of 3 p.m., with 68.1% of the electorate having voted compared with 63.7% five years ago, according to the National Election Commission.

Below are some Nikkei Asia stories published in the run-up to election day:

-- The two main candidates have contrasting backgrounds, Nikkei Asia Seoul correspondent Kim Jaewon writes. Lee comes from a poor background and worked factory jobs when he was young. He went on to practice law as a civil rights lawyer before entering politics, serving as the mayor of Seongnam, southeast of Seoul, and then as governor of Gyeonggi Province. Yoon, a political novice, studied law at the elite Seoul National University, before rising through the ranks to become prosecutor general.

-- Our Big Story this week digs into the trials of Samsung Electronics Vice Chairman Lee Jae-yong and its implications for succession at South Korea's electronics giant. Candidates in South Korean presidential elections usually run with pledges to reform the chaebol -- the powerful family-run conglomerates that dominate the country's economy. But this year, the two front-runners have no such plans to clip the wings of the likes of Samsung, Hyundai Motor, SK and LG.

-- Yoon is targeting young male voters who are dissatisfied with what they say is a system that favors their female peers, and plans to abolish the country's gender equality ministry. Lee has been vague on gender politics, but neither seem to be appealing to young women.

-- The war in Ukraine has roiled the race, forcing one top candidate to walk back his reaction and fueling fresh debate over defense on the peninsula. Lee has faced a backlash after he said Ukrainian President Volodymyr Zelenskyy's inexperience contributed to Moscow's decision to invade.