SEOUL -- "We will only see the people smile on the day they can remove their masks," Hwang Kyo-ahn, the leader of South Korea's main opposition United Future Party, wrote in a recent statement intended to rally voters ahead of next week's general election.

Hwang said people were under great psychological and economic strain from the new coronavirus outbreak, and blamed the administration of President Moon Jae-in for failing to protect the public.

He concluded the statement by predicting that in the April 15 election, "Our citizens will punish the incompetent and swindling politicians."

Despite Hwang's apparent confidence, it currently appears more likely that the government's management of what, at one point, was the largest COVID-19 outbreak outside of China, could work in the incumbent administration's favor.

The election is set to go ahead despite South Korea having confirmed more than 10,000 infections, as the country appears to have slowed the spread of the virus. From a peak of more than 900 daily new cases of COVID-19 in February, the number of new infections per day has hovered at roughly 100 in recent weeks, before dipping to around 50 in recent days.

"The Moon administration has improved its level of public trust, as it has shown it can handle a crisis like this with measures that are within the principles of democracy," said Yu Yong-wha, a visiting professor at Hankuk University of Foreign Studies. According to a poll by Gallup Korea in the last week of March, 55% of respondents approve of the way Moon is running the country, up 6% from the previous week and comfortably ahead of the 39% who responded that he was doing a poor job.

That amounts to Moon's highest approval rating in 17 months. The poll also noted marked increases in the president's approval rating across the country, including in the Daegu area, the hub of the COVID-19 outbreak in South Korea and a traditional conservative stronghold.

Among voters of all ages, 41% said they backed Moon's party, 23% supported the UFP and 22% were undecided.

A poll carried out by Hankook Research logged more than 80% of respondents answering that South Korea's response to COVID-19 was "better than other countries."

The elections will be by far the most significant gauge of public sentiment since Moon took office, in May 2017, in the wake of a massive corruption scandal that led to the ouster of his predecessor.

The low numbers of new infections each day are apparently the result of South Korea's widespread testing throughout March, as well as officially mandated social distancing measures.

The country has tested more than 486,000 people for COVID-19, according to South Korea's health ministry. In the early days of the virus's spread, the government worked closely with private medical companies to ease regulations to allow swifter production and distribution of tests kits to meet the sudden rising demand.

More recently, municipal governments have set up drive-thru and walk-up tests in public places. Those authorities also communicate directly with the public through text messages that announce the discovery of any new cases in a particular area, and remind people to minimize outdoor activities and practice strict hygiene.

Out of concern over cases coming in from abroad, the country is now testing all international arrivals and requiring all travelers to self-quarantine for 14 days.

Kim Da-hye, a film professional in her late 30s, said she planned to vote for the ruling party because she approved of their handling of both the pandemic and the economy. "I actually support the [minor left-wing] Justice Party, but I don't think they'll get any seats this time," she said. 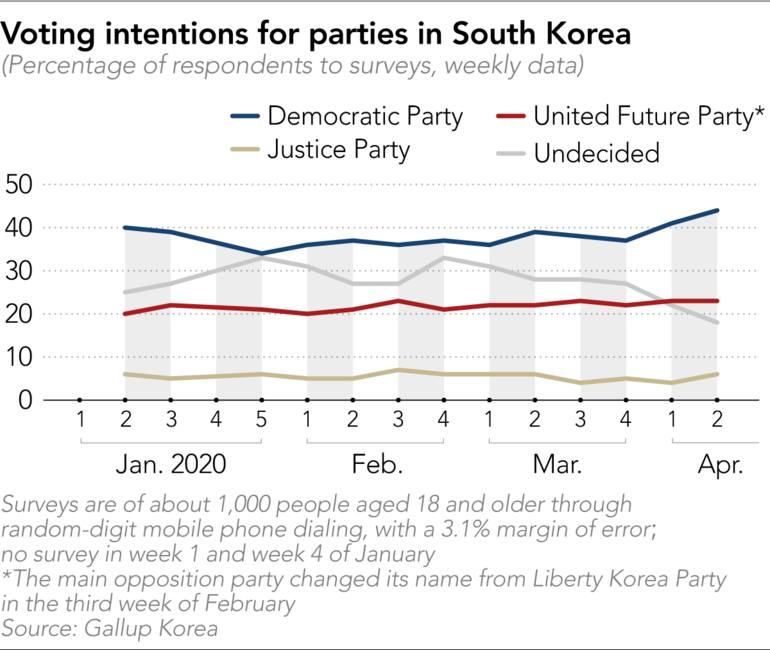 South Korea has won plaudits from international observers for an organized and assertive response to COVID-19 that allowed it to rein in the virus's spread without comprehensive lockdowns or travel bans.

According to an internal Democratic Party document reported by local media, the ruling party encouraged campaigners to actively seek to use the government's handling of the outbreak as a favorable factor, and to tell voters that South Korea's response has "inspired the world."

Before the outbreak consumed the public conversation, the election chatter hinged on how voters would assess Moon's approach to reviving South Korea's slumping economy. The conservative opposition has criticized Moon's "income-led growth" strategy as having not yielded results, and has castigated the administration's policy of seeking rapprochement with North Korea.

"This forthcoming election was to be a judgment on the Moon administration's failed economic, foreign policy management, along with various corruption scandals linked to Moon's Blue House," said Kim Hyung-A, an associate professor of Korean Politics at Australian National University in Canberra.

"The coronavirus pandemic has sidelined all of these issues," Kim said. 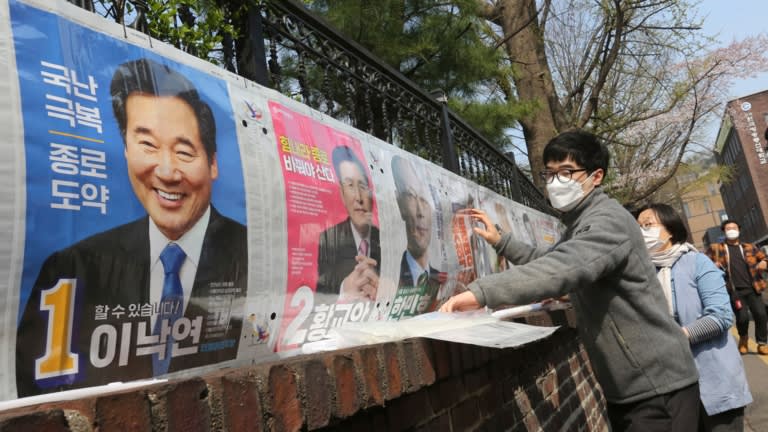 According to a poll carried out by the Munhwa Ilbo newspaper, 37% of respondents said the economy will still be the issue that determines how they vote, with 30% saying the virus is the decisive issue.

The United Future Party has not offered a detailed criticism of the Moon administration's COVID-19 response beyond insisting that the government risked public health by not enacting a comprehensive entry ban on all travelers from China. The government banned only travelers from the city of Wuhan and its surrounding areas.

Kim, the professor, says, with the pandemic having swung momentum in the ruling party's favor, the opposition faces an uphill battle. "The problem of the weak economy will not provide any tangible chance for the opposition to build its support base at this time," she said.

Park Sook-hee, a retired accountant in her early 60s who lives in southern Seoul, said she normally votes conservative but isn't sure how she'll cast her ballot this time.

"If there was a big change in the National Assembly now, it could be disruptive during a national crisis," she said. "I think maybe it's better to let the current government continue with what they've been doing."