NEW DELHI -- The 14th start of India's wildly popular Premier League cricket tournament begins Friday evening. Although stadiums will be devoid of fans due to surging COVID-19 cases, the return of deep-pocket Chinese corporate sponsor should make this a lucrative year.

The cash-rich Twenty20 competition featuring national and international cricketers was moved last year to the United Arab Emirates, where it was held without crowds between September and November. This year, the Indian Premier League extravaganza returns home with Ahmedabad, Bangalore, Chennai, Delhi, Mumbai and Kolkata hosting 60 matches until May 30.

Chinese smartphone maker Vivo made a comeback as the main sponsor of the IPL tournament after opting out in the 13th season against the backdrop of anti-China sentiment following a violent Sino-India border skirmish. Online sports gaming company Dream11 had replaced Vivo for the 2020 tournament with a bid of 2.22 billion rupees ($29.7 million), half of what the Chinese company was paying annually for sponsorship rights.

Before Vivo, the IPL title sponsorship was held by U.S. beverage giant PepsiCo, which ended the five-year contract two years ahead of schedule leading to the Chinese company replacing it for 2016 and 2017. Vivo retained sponsorship for five seasons beginning in 2018 with a huge 21.99 billion rupee bid, or about 4.4 billion rupees annually -- up 454% over the previous contract with PepsiCo.

"I'm happy to announce that Vivo is back on board with us and this edition of the league will be known as Vivo Indian Premier League," IPL Governing Council chairman Brijesh Patel said in February during the players' auction. 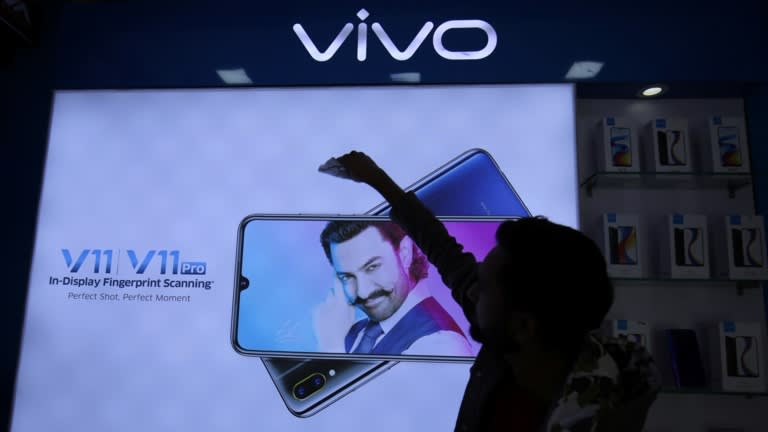 "In India, cricket is more than just a sport. It is an important part of our culture and social life, with a huge fan following, especially by millennials," said Ravi Kumar, co-founder and CEO of Upstox, commenting on partnership with the league.

According to a BARC-Nielsen report, 269 million people watched IPL in its opening week last year, with viewing minutes up 15% compared with the previous year.

IPL's Patel said in his February address that while the tournament was held without fans for the first time in 2020, its official broadcaster Star Sports "showed the digital way of taking fans closer to the action."

According to the Financial Express newspaper, the cricket board will earn 2.8 billion rupees more from seven other sponsors. "Subsequently, IPL franchises are expected to clock a 10% to 15% rise in revenue this year," it said in an April 6 report, while citing industry estimates that the eight franchises together registered 4.5 billion to 5 billion rupees as sponsorship revenue last year.

According to Arvind Singhal, chairman of Technopak Advisors, brands hardly care whether spectators are at venues. "The audience for brands is basically those who are watching on TV or any other [digital] platform," he told Nikkei Asia.

"Despite COVID-19, the interest in cricket remains ultrahigh," Singhal said, adding that with virus-induced restrictions, including night curfews in cities like New Delhi and Mumbai, "people have very limited options to go out, which is good news from advertisers' point of view" as they will have more TV viewers of IPL matches, most of which are played late in the evening.

"There's collateral damage certainly to bars, restaurants and other public places," with which brands might have gone for tie-ups for live broadcasts had there been no restriction on people's movement, Singhal said. 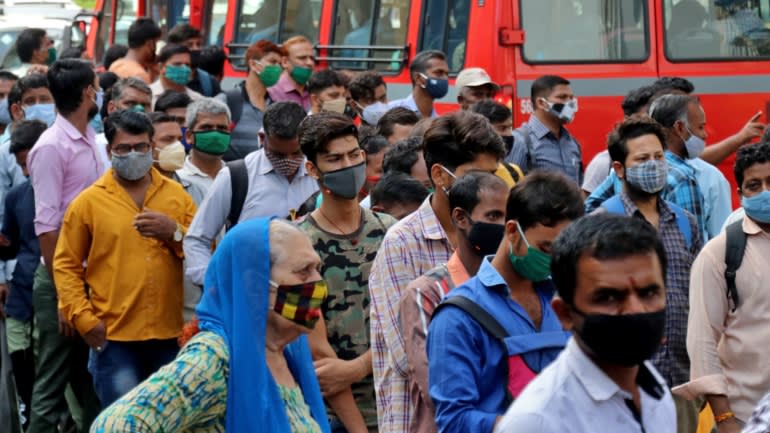 People wait to board buses during rush hour in Mumbai. India is currently witnessing a second wave of COVID cases.   © Reuters

Mumbai Indians, it said in a March report, claimed the top spot among the eight IPL teams for the fifth straight year with a brand value of 7.6 billion rupees, down 5.9% from 2019. Chennai Super Kings and Kolkata Knight Riders, the two other IPL franchises, ranked number two and three, respectively, with the value of CSK dropping 16.5% to 6.11 billion rupees and KKR declining 13.7% to 5.43 billion rupees in 2020, it added.

Among the top buys in IPL's player auction this year were South African cricketer Chris Morris, who was bought by Rajasthan Royals for a record 162.5 million rupees, and New Zealand fast bowler Kyle Jamieson and Australian all-rounder Glenn Maxwell, who were picked up by Royal Challengers Bangalore for 150 million rupees and 142.5 million rupees, respectively.

Teams and support staff have been largely isolated to minimize the risk of the COVID-19 spread. Nevertheless, some tested positive for the virus ahead of the tournament, as India continued to report a spike in daily cases, registering an all-time high of 131,968 new infections on Friday.

However, observers remain optimistic. "The current COVID-19 situation is unlikely to impact the IPL 2021 schedule," said Raju Sharma, head coach for under-19 cricketers in Delhi and a former IPL assistant coach in comments to Nikkei Asia. "Even though spectators are not allowed on grounds, there's a lot of excitement among fans who are looking forward to watching the matches on TV and other digital platforms."

"Much of the revenue [for BCCI] comes from broadcasting rights," he noted, adding that viewership is expected to increase further this year.