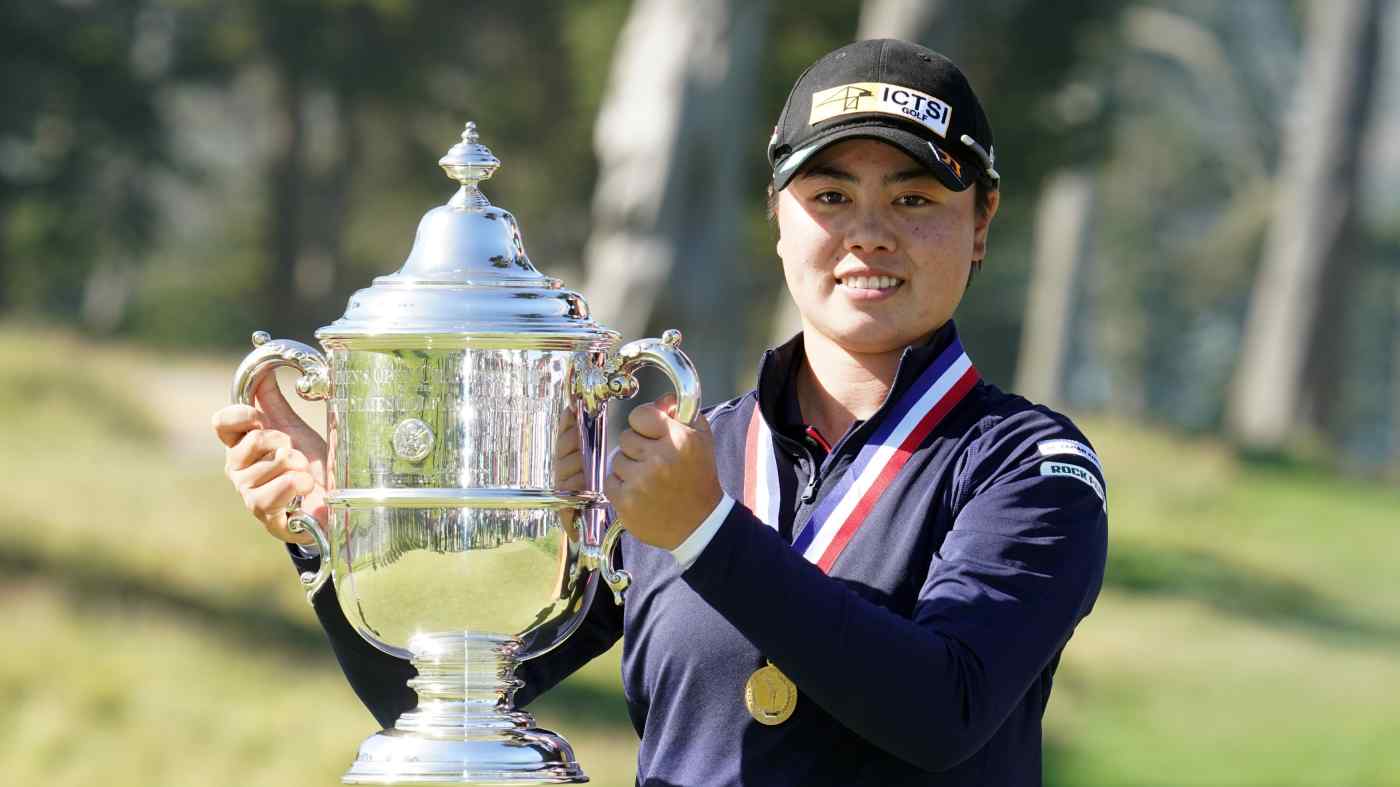 Yuka Saso hoists the US Open trophy after winning in a sudden death playoff following the final round of the U.S. Women's Open golf tournament at The Olympic Club in San Francisco, U.S. on June 6. (Photo by Kyle Terada/USA TODAY Sports)    © Reuters
June 7, 2021 08:50 JSTUpdated on June 7, 2021 10:03 JST | Japan
CopyCopied

SAN FRANCISCO (AP) -- Yuka Saso modeled her golf game after Rory McIlroy, spending hours watching videos of his swing before going to bed each night in order to perfect her own.

All that work paid off and now Saso is a U.S. Open champion just like her idol thanks to a clutch playoff putt after a back-nine collapse by Lexi Thompson.

Saso's 10-foot putt for birdie on the third playoff hole Sunday helped her edge out Nasa Hataoka and become the second teenager to win the U.S. Women's Open.

Saso overcame back-to-back double bogeys early in the round to make the playoff and then became the first player from the Philippines to win a golf major.

"I was actually a little upset," Saso said about her poor start. "But my caddie talked to me and said, 'Just keep on going; there's many more holes to go.' That's what I did."

Both players made pars at Nos. 9 and 18 in the two-hole aggregate playoff, sending the tournament to sudden death back at the ninth hole. That set the stage for Saso to win it just up the road from Daly City, dubbed "Little Manila" for its large population of Filipinos.

There were many on hand for the final round, including several with Filipino flags for the occasion. Yuka Saso plays her shot from the ninth tee during the two hole aggregate playoff following the final round of the U.S. Women's Open golf tournament at The Olympic Club in San Francisco, U.S. (Photo by Kelvin Kuo/USA TODAY Sports)   © Reuters

Thompson, who had a five-stroke lead after the eighth hole, played the final seven holes in 5 over to finish a stroke back.

"I really didn't feel like I hit any bad golf shots," she said. "That's what this golf course can do to you."

The only other players to finish under par on the Lake Course at Olympic Club were Megan Khang and Shanshan Feng, who both were at 2 under.

High school junior Megha Ganne played in the final group but shot 77 and finished 3 over as the low amateur for the tournament.

"I'm going to remember this for the rest of my life," Ganne said. "It's everything I've wanted since I was little, so it's just the best feeling."

Saso has talked frequently about her time studying McIlroy's swing and the four-time major winner said he saw the similarities and was flattered by it. McIlroy also send Saso an Instagram message before the final round imploring her to get the trophy.

"I saw it this morning, and I was like, 'Ohhh!'" she said. "I should have reposted it but I was so busy this morning, so I'll do it later. I felt really happy."

Saso got the trophy after a rough start to the final round with double bogeys on the second and third holes that seemed to knock her out of contention. She managed to steady herself with a birdie at No. 7.

Saso then made back-to-back birdies on the par-5 16th and 17th holes to get to 4 under and join Hataoka in the playoff. Hataoka used a run of three birdies in a four-hole span on the back nine that put pressure on Thompson.

Thompson wilted down the stretch, making this the seventh straight LPGA Tour major won by a first-time winner.

The first U.S. Women's Open on the fabled Lake Course at the Olympic Club ended up like so many of the previous five times the men competed for the national championship here.

The 54-hole leader didn't win any of those five U.S. Opens played by the men, helping the Olympic Club earn the moniker of the "Graveyard of Champions." Previous winners Ben Hogan, Arnold Palmer, Tom Watson, Payne Stewart, Jim Furyk and Graeme McDowell all got caught on the final day at Olympic and were denied their titles.

Thompson had a five-stroke lead when she walked off the eighth green but she squandered it all on the back nine. She made a double bogey at No. 12, a bogey at 14 and then a bogey 6 on the par-5 17th that was reachable in two shots based on the tee location.

"I didn't hit a bad drive," Thompson said. "The wind just never got it and then it tried to bounce right, and I've never seen a lie that bad. That's what this course can do. Just got the wind wrong on a few shots coming in."

Her approach shot on the par-4 18th ended up un the bunker and then she missed a 10-foot putt to make the playoff.

Thompson was unable to add a second major to the one she won at the ANA Inspiration in 2014. It was another final day disappointment to go with the one that happened at that same tournament in 2017 when she was penalized four strokes during the final round for misplacing her marked ball the previous day and lost in a playoff.

"It's hard to smile, but it was an amazing week," Thompson said.