Americans advance to round of 16; some Iran supporters cheer Mahsa Amini protest 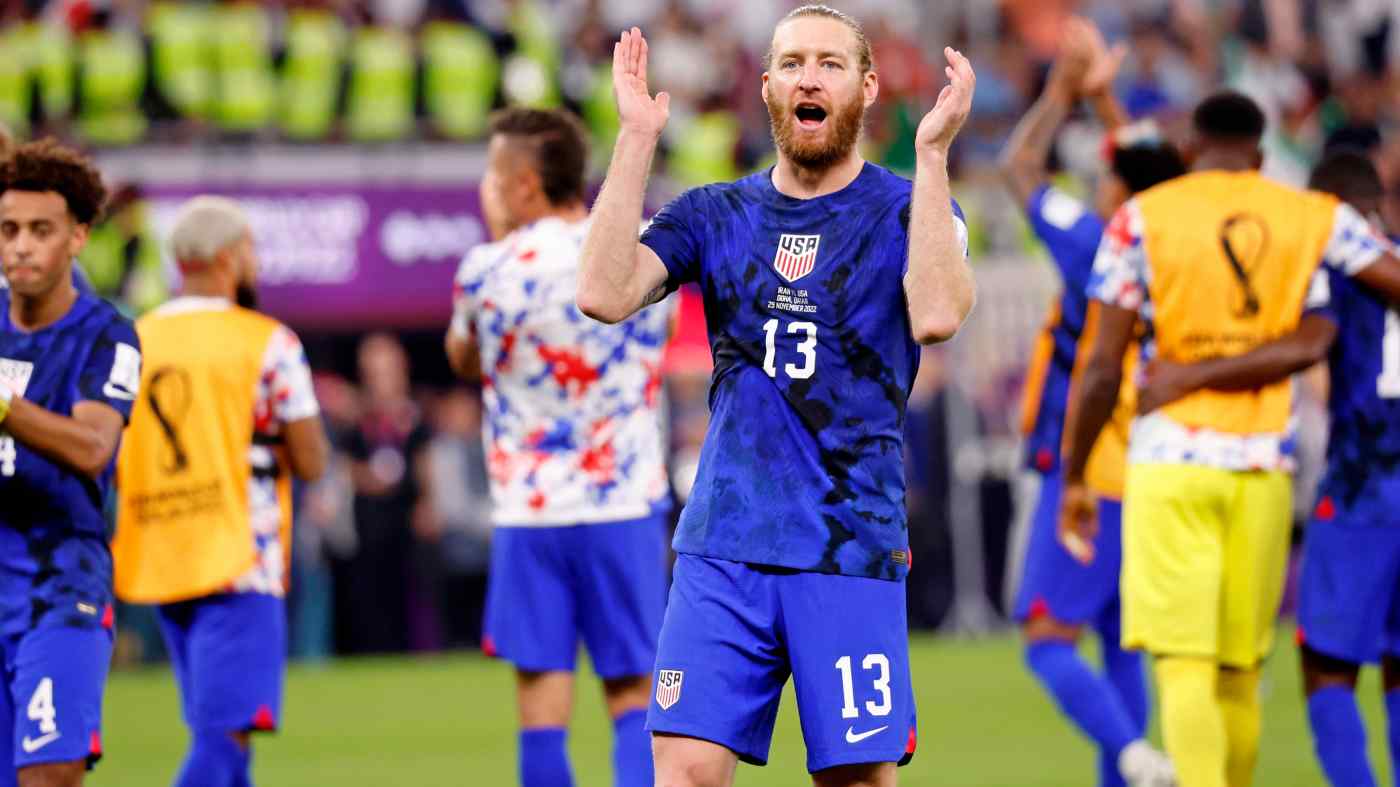 DOHA (Reuters) -- The United States triumphed on the pitch over longtime adversary Iran on Tuesday in a World Cup showdown overshadowed by protests raging in Iran and laced with decades of political tension between the two countries.

The contest between the two nations, who severed ties more than 40 years ago, was held with increased security to prevent a flare-up over the unrest that has gripped Iran since the death in custody of 22-year-old Mahsa Amini on Sept. 16.

In a show of solidarity with protesters in Iran ahead of the match, the U.S. Soccer Federation temporarily displayed Iran's national flag without the emblem of the Islamic Republic, leading Tehran to complain to FIFA.

Qatar, which has strong ties with Washington and friendly relations with Tehran, has staked its reputation on delivering a smooth World Cup, beefing up security at Iran games and banning some items deemed inflammatory, like Iran's pre-revolution flag.

U.S. Secretary of State Antony Blinken, speaking in Romania, downplayed any link between the match and political tensions and said he hoped the game would "speak for itself," adding that he would be watching and cheering on his country.

In sporting terms, the 1-0 win for the United States means they progress to the knockout stage, while Iran are out of the competition.

But for fans attending the first World Cup in the Middle East, or watching across the world, Iran's domestic politics and its four decades of troubled relations with the United States formed the dominant backdrop to the sporting contest.

Extra security personnel, some mounted on horseback, patrolled outside the stadium ahead of the match while guards at the perimeter made Iranians unfurl their flags before entering. Police were stationed throughout the stadium alongside regular security guards. Some carried batons.

Early in the second half, a group of fans briefly held up letters spelling Mahsa Amini's name, to applause from Iranian supporters around them. Security personnel took their signs but allowed them to remain in their seats.

A Qatari official said before the match that authorities would ensure all matches were "safe and welcoming for all spectators." Items that "could increase tensions and risk the safety of fans" would not be permitted at stadiums.

Gulf Arab monarchies, including Qatar, do not tolerate domestic dissent, and protests are rare in the region.

Ahead of the match, some fans outside Al Thumama Stadium sought to highlight the protests, which authorities in Iran have tried for more than two months to quell.

"Everybody should know about this. We don't have a voice in Iran," said an Iranian living in the United States who gave his name only as Sam.

He raised his shirt to show a T-shirt underneath with the protesters' slogan: "Woman, Life, Freedom."

Speaking by phone from Tehran shortly before kickoff, 21-year-old Elham said she wanted the United States to win because victory for the national squad, known as Team Melli, would be a gift for Iranian authorities.

"This is not my national team. It is not the Melli team, it is the mullahs' team," she said.

Under pressure to publicly support protesters at home, the Iran team declined to sing the national anthem in their first game against England, which they lost 6-2. But they sang it ahead of their second match, a 2-0 victory over Wales, and again on Tuesday.

The unrest in Iran poses one of the boldest challenges to the theocracy since the 1979 Islamic Revolution. The United States has imposed sanctions on Iranian officials over the crackdown on protesters.

Washington and Tehran severed formal relations in 1980 after the revolution. When their soccer teams clashed in the 1998 World Cup, Iran emerged with a 2-1 victory.

Steve Garcia, from Phoenix, Arizona, said the United States and Iran had their differences but could come together in sport.

"I know there's a lot of politics going on, but the way I look at it -- like, hey, we're here to have a common bond, which is the sport of football, soccer," he said.