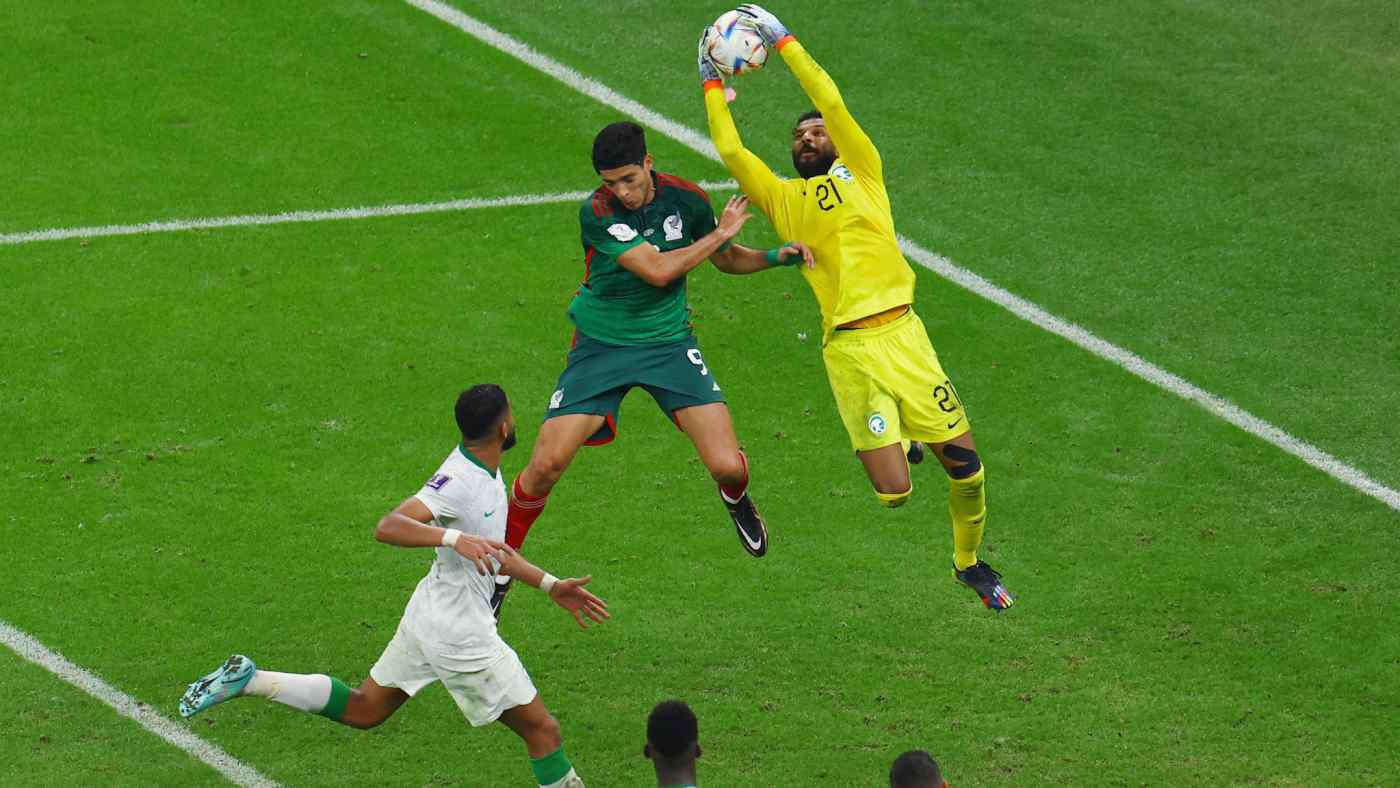 LUSAIL, Qatar (Reuters) -- In a wild ending Wednesday, Mexico defeated Saudi Arabia in Group C, 2-1, but it did not win by enough and for the first time since 1978 failed to advance out of the World Cup group stage.

Mexico led 2-0 going into stoppage time at Lusail, Qatar, desperately needing a third goal to advance to the knockout stage; at just a two-goal advantage, they were losing to Poland on fair-play points.

Despite getting 26 shots and 11 on goal, El Tri could not get another goal and got caught by Salem Al-Dawsari, who scored on a breakaway in stoppage time to ensure Mexico would lose the tiebreaker to Poland on goal differential.

Mexico entered the day needing to win and make up five goals on Poland. They made up four of those goals when Henry Martin (47th minute) and Luis Chavez (52nd) scored early in the second half, and within minutes of each of those goals, Argentina scored twice against Poland.

Saudi Arabia, which started the tournament by defeating Argentina last week, needed a win to advance.

Mexico manager Gerardo "Tata" Martino immediately stepped down after the loss, saying, "My contract ended as soon as the referee blew the final whistle."

Second-half goals from Alexis Mac Allister and Julian Alvarez led to a victory over Poland and vaulted Argentina into the knockout stage.

Despite the loss, Poland is also through to the Round of 16 thanks to a one-goal advantage in goal differential over Mexico. Poland and Mexico played to a scoreless tie last week.

Argentina dominated the match to win Group C, completing its recovery from the massive upset to Saudi Arabia in the group stage opener. Argentina will play Australia in the next Round of 16, while Poland earns a match vs. France.

Lionel Messi was denied by Poland goalkeeper Wojciech Szczesny on a penalty kick in the first half, but Mac Allister tallied in the 46th minute and Alvarez followed with a goal in the 67th.

Mathew Leckie broke the deadlock in the 60th minute and Australia advanced to the last 16 for the first time since 2006 with a 1-0 defeat of Denmark in Group D on Wednesday at Al Wakrah, Qatar.

After Leckie finished off a successful counterattack, Denmark's last best chance came about 10 minutes later when the Danes were called for a penalty after a foul against Kasper Dolberg. Dolberg, however, was ruled offside.

The Socceroos lost 1-0 to Italy in their only previous appearance in the knockout stages 16 years ago.

Denmark got three saves from Kasper Schmeichel but finished at the bottom of the group with one point.

Wahbi Khazri's goal against the defending World Cup champion France was bittersweet as Tunisia was eliminated despite its victory in Doha, Qatar.

Khazri, who was born in France, fought through traffic to score in the 58th minute to give Tunisia just its third win in six World Cup tournaments.

France had already booked its spot in the knockout stage and finished on top of Group D with six points, ahead of runner-up Australia based on goal differential.