BEIJING/SHANGHAI -- China has become a land of unicorns, home to at least 70 unlisted startup companies valued at $1 billion or more. And the government is counting on them to work some much-needed magic on the private sector.

Bands of the ventures are concentrated in four Chinese cities: Beijing, Shanghai, Hangzhou and Shenzhen. Some aim to unleash the power of artificial intelligence. Others focus on financial technology or lifestyle services. Together, they promise to help pull the country's economy through the trade war with the U.S.

When these startups go public, they are expected to attract enormous sums of money from around the globe. Already, they are reaching millions of customers, disrupting industries and in some cases raising security fears.

Chinese tech companies listed in China and Hong Kong have seen their shares plunge this year, amid a market shakeout. But while the Shanghai Composite Index is down about 20% since the beginning of 2018, analysts say that there is still appetite for good startups.

And technology giants like Alibaba Group Holding, Tencent Holdings and Baidu are increasingly acquiring startups, which allows investors and venture capitalists to take profits at that stage.

Meanwhile, a number of startups are aiming to list in the U.S., rather than on Chinese equity markets, which can be burdened by regulation.

E-commerce company Pinduoduo, electric-vehicle maker Nio; and video-sharing website operator Bilibili have all chosen to list in the U.S. this year. As a result, corporate and individual investors in Chinese startups are not too concerned by the turmoil in mainland China stock markets. 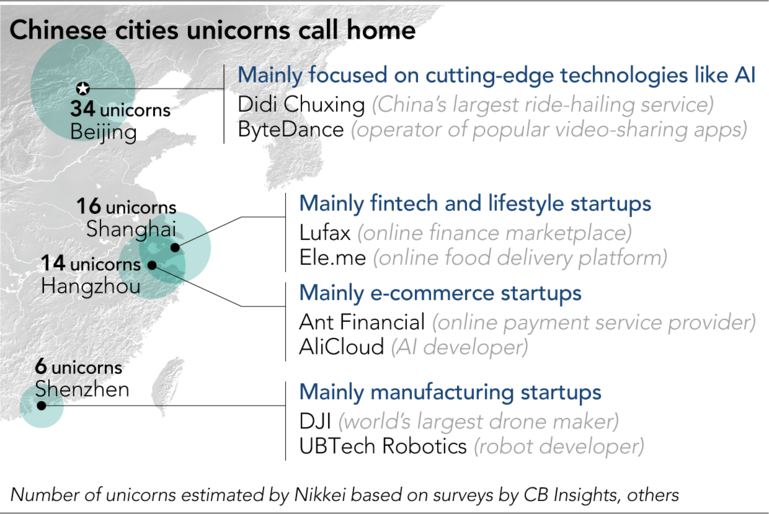 The 70, as counted by U.S. market research company CB Insights in August, are only the biggest. A staggering 16,000 new businesses emerge in China every day, according to one estimate. That is no accident.

In 2014, President Xi Jinping's government adopted a slogan: da zhong chuang ye, wan zhong chuang xin, which roughly translates to "mass entrepreneurship and innovation." The government sees these ventures as the next growth drivers and provides ample support, although that can be both a blessing and a curse.

A tour of China's four main startup cities reveals that each one tends to produce specific types of companies.

Beijing has the most unicorns by far, with 34, and much of the activity is centered in Zhongguancun, a district commonly referred to as China's Silicon Valley.

The area is home to prominent schools such as Peking University and Tsinghua University, as well as national research institutions like the Chinese Academy of Sciences. Personal computer manufacturer Lenovo Group, search engine company Baidu and smartphone maker Xiaomi are all headquartered there, too.

This rich technological foundation has sparked some of the more cutting-edge, tech-driven unicorns, with a heavy emphasis on artificial intelligence. The list includes Didi Chuxing Technology, the country's dominant ride-hailing service with 550 million users, and ByteDance, operator of news and video-sharing platforms Jinri Toutiao and Douyin.

Shanghai, home to 16 unicorns, has been a dynamic Asian financial center for a century and is now a major base for fintech startups. The city's hottest unicorn is arguably Lufax, an online wealth management platform specializing in peer-to-peer lending, set up by Ping An Insurance Group.

Hangzhou, about 175 km southwest of Shanghai, is e-commerce central -- not surprisingly, since industry giant Alibaba Group Holding is based there. Alibaba is omnipresent in the city, where around 80,000 employees of the company and its affiliates reside in a forest of condominiums.

Of Hangzhou's 14 unicorns, the largest is Ant Financial Services Group, the Alibaba-affiliated operator of e-payment platform Alipay. Ant Financial is China's most valuable unicorn, at $75 billion, and leads a growing army of Alibaba-linked ventures in Hangzhou, such as cloud computing company AliCloud.

The local governments of all four cities offer generous incentives for entrepreneurs, such as interest supplementation and tax reductions for research and developments. But they are not alone -- other cities in the country want to raise unicorns.

Asei Ito, an associate professor at the University of Tokyo who specializes in the Chinese economy, predicts that Nanjing and Chengdu will join the ranks of startup capitals. He sees the Xiongan New Area, Xi's pet economic development project in Hebei Province, as another candidate.

The central and local governments, of course, cannot simply will unicorns into existence.

Chinese investors have been piling into the venture capital market, seeking juicy targets besides stocks and real estate, which have come under pressure recently. That is a big reason the number of $1-billion-plus startups has more than tripled over the past three years, making gains on the U.S., with its 120 unicorn companies.

Leading the way are China's internet powerhouses. The top three -- Alibaba, Tencent Holdings and Baidu -- supplied 42% of the money invested in the country's startups in 2016, according to McKinsey. By comparison, the U.S. big four -- Google, Apple, Facebook and Amazon.com -- accounted for just 5% of all venture capital investment in their country.

Alibaba's venture capital fund holds a 33% stake in Ant Financial, and in September it poured tens of millions of dollars into YCloset, a platform for designer dress rentals.

Meituan Dianping, a company that handles online food delivery orders along with restaurant and hotel reservations, hit a market value of $50.6 billion when it went public in Hong Kong on Sept. 20. (The company's market cap has fallen to about $42 billion since then, as Chinese tech stocks have been battered in recent weeks.) 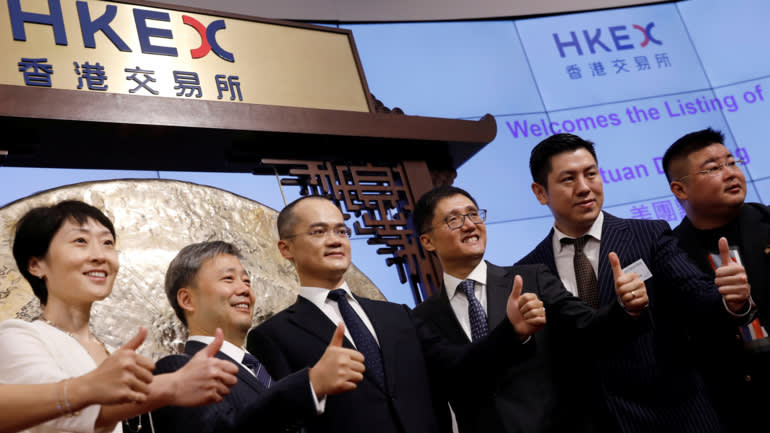 Around 340 million consumers used Meituan's paid services in the year through April 2018. Co-founder and CEO Wang Xing said the Beijing-based company's mission is to build lifestyle "infrastructure," using the money it has raised to develop competitive artificial intelligence and big data technology.

Other big Chinese IPOs in 2018 have included video-sharing website operator Bilibili in March, Xiaomi in July and electric vehicle maker Nio in September.

Virtually every week, individual investors can attend events to connect them with startups. At one in Hangzhou in early September, a fitness venture raised about $444,000 with a six-minute presentation.

All told, during the first nine months of the year, unlisted Chinese companies raised the equivalent of more than $80 billion in capital, roughly on a par with the figure for the U.S., the biggest venture capital market.

The appeal of China's startups stems not only from their massive home market but also their global ambitions. Frequent events held across Chinese give individual investors a chance to buy into startups. (Photo by Yusho Cho)

Take, for instance, Imperial Vision Technology -- a startup launched in the southeast city of Fuzhou by two entrepreneurs, Gao Qinquan and Tong Tong, with doctorates from Imperial College London.

The company's technology instantly compresses and expands image data. The pair recognized that China's relatively slow data transmission speeds meant there was a need for image compression, according to Gao. But they also see potential for the technology in other emerging countries.

Imperial Vision counts broadcasters among its clients, and Intel is also reportedly interested in its system.

ByteDance's video-sharing app TikTok, meanwhile, is a hit with young Japanese. The app for posting 15-second clips was downloaded 10 million times in Japan between the release in summer 2017 and this past August. Many users are likely unaware of its Chinese origins.

Infervision, a medical technology startup in Beijing, has found an ideal proving ground in rapidly aging Japan. The company entered the market in 2017, armed with an AI-assisted system for diagnosing lung cancer.

CVIC, a Japanese medical services corporation, introduced Infervision's system on a trial basis. "It was ready for immediate practical use," said Yoshitomo Furusawa, CVIC's executive director. "I was surprised by the degree of perfection."

As China's unicorns gallop out into the world, however, they do not always receive a warm welcome. From the U.S. to India, governments are wary of Beijing's influence. Last year, India's Ministry of Defense ordered the military to remove Xiaomi's software from smartphones, fearing leaks of sensitive information. Xiaomi is the top player in the Indian smartphone market.

Likewise, the U.S. has imposed restrictions on Chinese telecommunications products out of concern over cyberattacks and intellectual property theft. And the U.S. Army last year banned units from using DJI drones, according to Reuters.

Chinese Vice Premier Liu He raised eyebrows in September when he visited Shanghai venture DeepBlue Technology. The four-year-old company offers AI-driven store automation technology and has partnered with Japanese retailer Aeon. Liu, a key economic adviser to Xi, called the business "very interesting" and delivered an unusually strong message for a private-sector company: "We hope for your success."

But as Bilibili found recently, Beijing's involvement in the private sector has its drawbacks. In August, Bilibili's video-sharing app was temporarily blocked after the government deemed some clips disruptive to social order. The company immediately bowed to the pressure.

Chinese startups and their backers face other risks. Consider the trials, literally and figuratively, of bicycle-sharing ventures.

In September, a Hangzhou judge ruled against a partner of leading player Ofo in a case over unpaid bills to a bicycle supplier. The ruling was by default, since company representatives had failed to appear in court. Ofo is facing other, similar lawsuits.

Ofo was once touted as a symbol of China's new sharing economy and was valued at $3 billion in March. In half a year, that number plunged by two-thirds.

Seven bike-sharing companies trailing the top two -- Ofo and Mobike, the latter of which was acquired by Meituan in April for $2.7 billion -- have gone belly up. That underscores how promising markets can attract a glut of similar startups, leading to a wave of failures.

The vast majority of China's roughly 16,000 ventures established every day go out of business almost as quickly as they are founded. The average life of a private business in China is just 3.7 years. In Japan, the average bankruptcy occurs when a company is 23.5 years old.

Still, investments in startups continue to swell, raising fears of overheating. The average investment per Chinese startup in the first nine months of this year reached roughly $57 million, up about 45% for all of 2017.

In some cases, money is flowing into obscure businesses without rigorous due diligence. In one example, a startup named Redcore raised around $35 million by claiming to have developed China's first homegrown web browser that turned out to have been based on Google's Chrome.

Despite the pitfalls, China's startup boom is unlikely to fade.

"Young ventures will face tougher competition and threats from copycats," said Zheng Zhigang, a professor at Renmin University in Beijing. "But those that survive will be more competitive, boosting China's economic development."

Asked whether the current trade war could stunt startups' growth, Zheng said that while there may be short-term effects, he does not anticipate long-term consequences.

With continued support from the government and powerful investment funds, Chinese unicorns are unlikely to become an endangered species anytime soon.

Nikkei staff writers Daisuke Harashima in Dalian, Takashi Kawakami in Guangzhou and Tsubasa Suruga in Tokyo contributed to this report.