RedDoorz, which brings cheap hotels together under one brand, lets customers book rooms through its app. (Photo by Rie Ishii)
Startups in Asia

JAKARTA -- For Amit Saberwal, boredom could prove to be worth billions.

Saberwal is the founder of RedDoorz, a budget hotels startup that is shaping up to be Southeast Asia's answer to India's Oyo -- a $5 billion venture backed by the SoftBank Vision Fund. In only six years, Oyo has become one of the world's largest hotel chains by bringing thousands of small, often family-run establishments into one network under a single brand, and RedDoorz looks well on its way to replicating that success in its own region.

But before Saberwal founded his venture in a Jakarta cafe, he was a career hotelier who felt stuck in a rut.

In 2005, determined to spice things up, he joined what was then a small Indian online travel company called MakeMyTrip. Five years later, the startup carried out a $70 million initial public offering on New York's Nasdaq exchange, and Saberwal moved to Singapore as its chief business officer. "I was there for another four years," he said, but started to feel that this chapter, too, was "coming to an end."

Saberwal decided to set out on his own, having seen firsthand "the power of how online could disrupt hotels." For help, he called a former colleague at MakeMyTrip, Kunwar Asheesh Saxena, who was working on an education startup.

"It took him one minute to decide," Saberwal recalled. "He was fed up with the boring life."

Now, RedDoorz is quickly emerging as a challenger to Oyo and another potential threat to SoftBank's "winner take all" strategy, under which the tech conglomerate pours huge sums into companies with the goal of overwhelming all rivals. 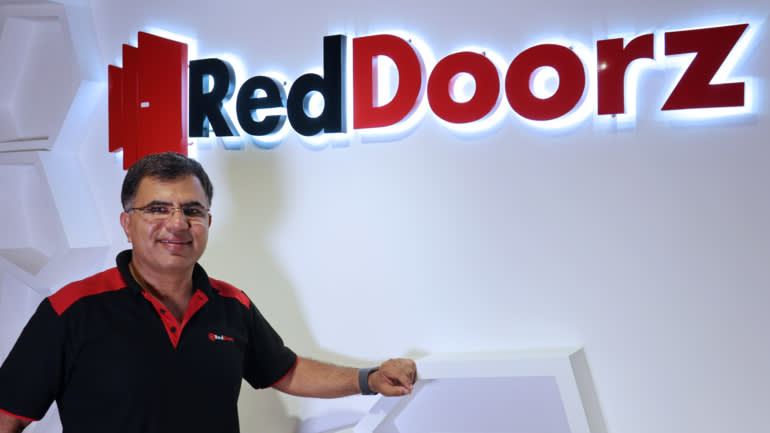 Amit Saberwal founded RedDoorz in a Jakarta shopping mall cafe where the internet would "log off every 30 minutes." (Photo by Shotaro Tani)

Like Oyo, RedDoorz's business proposition is simple: It gathers cheap hotels under one banner, either as lessors or franchisees. The hotels vary in quality, but the company endeavors to hold them to common standards -- insisting, for example, on clean sheets and towels, reliable internet and safe drinking water.

Big data plays an integral role in RedDoorz's operations. The startup has a proprietary system dubbed RedFox, which gathers a range of information to predict demand and set room rates accordingly. "We cannot have a situation where in our properties, some are doing 100% [occupancy] and some are doing 20% and everybody else is doing some other [percentage]," the founder said.

RedFox "knows now that every Wednesday, two days before payday, or four days after Lebaran [as Indonesians call the Islamic holiday of Eid al-Fitr], this is the estimated demand pattern and then it prices according to that. All this is in-house built. Everything from pricing to distribution to booking, payment -- everything is fully automatic."

Demand predictions also help RedDoorz decide which hotels to bring on board. The company divides cities into grids of 1-sq.-km areas, then color codes them green, yellow and red based on demand. The best areas are green, and so that is where RedDoorz teams go to recruit hotels. Saberwal said most RedDoorz customers are domestic and business travelers, both of whom tend to look for inexpensive accommodation. "They travel a lot and they want to be close to the place where they're working," he said. "RedDoorz has to be around five minutes away. ... The vision is to have RedDoorz on every relevant street corner."

According to the founder, occupancy rates in budget hotels typically stand at around 40% to 45%, but after joining RedDoorz the rates climb to 82% on average.

RedDoorz also provides training for hotel employees on topics like basic hygiene and English. "The biggest thing is that a lot of folks get trained and now become so much more employable," Saberwal said. "Sometimes before RedDoorz they're not even on minimum wage. And RedDoorz comes in, trains them, improves their quality of life, and maybe prepares them for another company in the future."

The startup is not profitable, but Saberwal said its properties are, implying that it is sacrificing earnings to reinvest in growth. It generates revenue in two ways: a leasing model, whereby RedDoorz pays the building owner a fixed monthly sum and takes whatever the property earns; and a franchise model, under which RedDoorz takes a cut of profits once they reach an agreed-upon threshold. 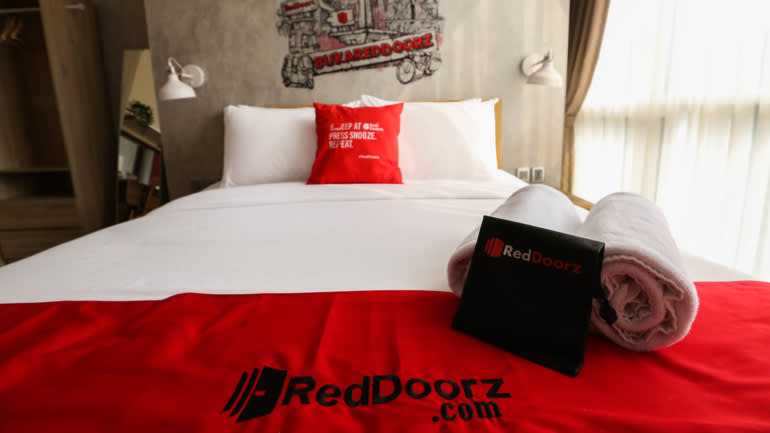 RedDoorz holds its independent hotel owners to common standards such as clean linens for guests, and offers them economies of scale in return. (Photo by Rie Ishii)

All of this started in a cafe in an upmarket shopping mall in central Jakarta, where Saberwal created RedDoorz in July 2015. The avid scuba diver was coming off a 20-year career in the industry, including his stint at MakeMyTrip and a period as head of sales and marketing at The Park Hotels. By September 2015, he had secured $1 million in funds, and RedDoorz set up its first property the following month.

Saberwal quickly relocated the business to a shared office because the cafe's internet would "log off every 30 minutes."

RedDoorz is now based in Singapore and is specifically focused on Southeast Asia. Aside from the city-state and Indonesia, it does business in the Philippines and Vietnam. Saberwal said his company adds 200 new properties around the region every month.

Although it does not disclose a detailed country-by-country breakdown, 70% of RedDoorz's 1,150 listed properties are in Indonesia.

That puts it ahead of Oyo in the Indonesian market. The Indian company, which has pledged to invest $100 million in Southeast Asia's largest economy, currently has 530 hotels there with 12,250 rooms, according to its spokesperson. RedDoorz remains far behind Oyo in overall inventory, though.

The Southeast Asian budget hotel market, meanwhile, is growing steadily, driven by millennial travelers who want to keep costs to a minimum. Euromonitor International data shows that in six Association of Southeast Asian Nations states -- Indonesia, Malaysia, the Philippines, Singapore, Thailand and Vietnam -- the industry grew by 18% to $9.5 billion over the last five years.

"Operators such as Oyo and RedDoorz capitalize on an underserved segment, which was historically a poorly run market of fragmented guesthouses, shared bunk beds and nonstandardized customer experiences," said Pauline Chong, principal at Singapore-based Cento Ventures. "Both companies, in their respective geographies, have already seen strong success simply by providing the quality service levels that are aligned to price." 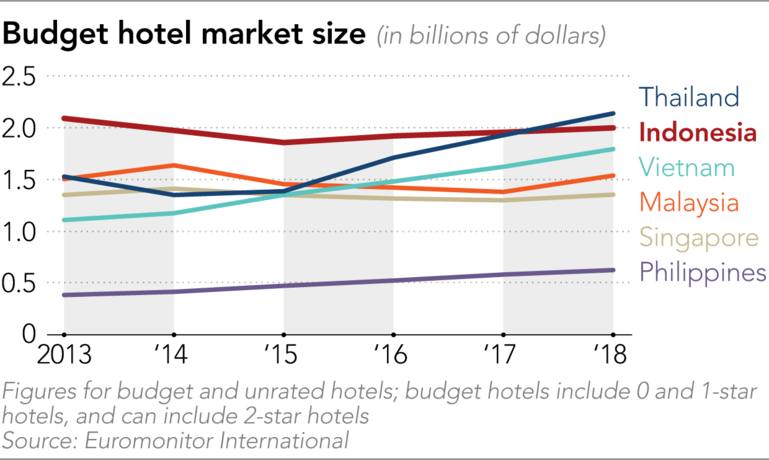 Yet, other Southeast Asian players with similar models have struggled. ZenRooms, backed by European venture capital Rocket Internet, was rumored to be on the verge of shutting down last year before it received an infusion from South Korean hotel platform Yanolja. Nida Rooms, now known as Hotel Nida, is restructuring after a cash crunch. And Tinggal, after giving up on building its own chain and becoming a provider of software for budget hotels, seems to have folded, according to Tech in Asia.

The business of budget hotel chains is "very capital-intensive, because significant investments need to be made in building the consumer brand, driving traffic to direct channels and delivering on-brand quality promises," said Vikram Malhi, co-founder of Zuzu Hospitality Solutions and formerly of Expedia. "Currently, a lot of money is being burned by these brands to expand but the path to profitability and sustainability will be extremely tough."

Of Oyo's competitors in the region, RedDoorz seems to be the best placed, investment data from Crunchbase indicates. So far, the Singapore-based company has received $69.4 million in funding from investors such as 500 Startups, a global venture capital firm, and International Finance Corp., an investment arm of the World Bank. Its intake beats ZenRooms' $23 million and Hotel Nida's $12.2 million. Saberwal no longer controls a majority stake in RedDoorz, though the shareholder breakdown has not been revealed.

Saberwal did not share his plans for an IPO but said he aims to lead RedDoorz into two more countries by 2020, and to become a unicorn -- a startup valued at over $1 billion -- by 2022. If RedDoorz gets there, it will join the league of global hospitality giants like Marriott International, InterContinental Hotels and, of course, Oyo. 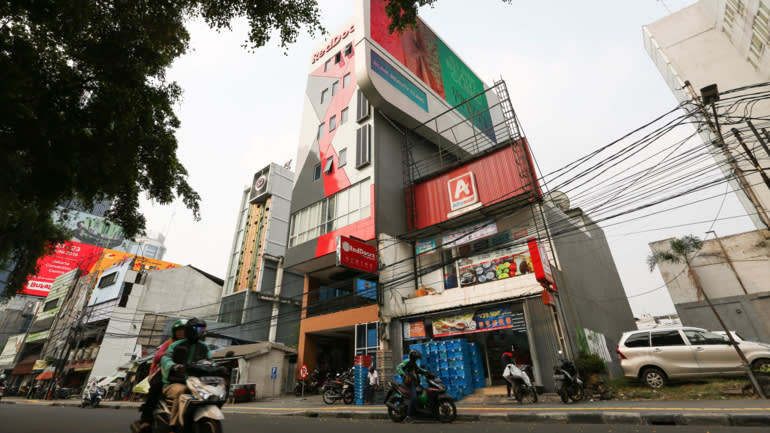 A RedDoorz hotel in Jakarta: 70% of the chain's 1,150 listed properties are in Indonesia. (Photo by Rie Ishii)

SoftBank's sheer financial muscle appears to give Oyo the edge, but Saberwal argues RedDoorz's narrow focus on Southeast Asia gives it a different advantage. "They have China to look after, which is a different [market]," he said. "They have India, U.S., Japan, Saudi Arabia, U.K., Germany. ... Our vision is to continue to be the dominant Southeast Asia player."

Even within Southeast Asia, RedDoorz takes a disciplined "city based" approach to expansion. "There is no Southeast Asian model," Saberwal said, explaining that in the Philippines, RedDoorz "didn't move out of Metro Manila until we reached 50 properties."

"Once we reach 50 properties in a city and we figure out we have cracked [the market], now we want other cities."

Felicia Halim, a contributing analyst at Euromonitor International, suggested it is smart to pursue a deep understanding of what customers want. "Once consumers learn that the quality offered by these players is not up to their expectations, to gain the favor of these consumers back later on is harder than attracting them the first time round," she said. "Once everything is set, strong and stable, the burning cash for promotional activities and branding can come next. They are equally as important."

Some might liken the budding Oyo-RedDoorz rivalry to the fierce competition between ride-hailers Go-Jek and Grab -- another company heavily backed by SoftBank, to the tune of a $3 billion Vision Fund investment.

Saberwal, however, dismissed the comparison. "It's an exciting angle to think about, to make it into a fight [akin to] Go-Jek versus Grab, but it's not," he said. "It's a different business model."

He explained that in ride-hailing, it does not take much for customers or drivers to switch from one company to another. "Just switch over the app," Saberwal said. "In our case, the property is branded, people know it, so the switching cost is very high for the property side, and the consumer side also. People won't change for a dollar or two if the [hotel] is closer to the place of work."

At the same time, he made it clear that RedDoorz would not shy away from competition with Oyo or anyone else. "When it comes to that, we will do our best, we will do what needs to happen. ... We are combative."

That sounds anything but boring.