Pix engineers assemble a car in Guiyang, China. Soon, they will supply colleagues in the U.S. with data to produce the parts there. (Photo by Coco Liu)
Startups in Asia

This year, Yu's auto startup in southwestern China is set to deliver its first vehicle to a U.S. buyer, but he has not even bothered to check how much President Trump's tariffs on Chinese goods might affect him. After all, he has a workaround -- even if it sounds like the stuff of science fiction.

Pix Moving, Yu's company, is using artificial intelligence to design cars and convert the blueprints into instructions for 3D printers. His vision is to upload the data to the cloud and let his team in the U.S. print all the components there.

"We don't export cars to the U.S.," the soft-spoken 42-year-old said. "We export the technique that is needed to produce the cars."

Though Pix is a tiny venture and its vehicles cannot yet be seen on public roads, it has caught the attention of at least two major automakers, Volvo and Honda Motor. And Yu is convinced the man regarded as the father of the auto industry would have seen the wisdom of his high-tech ways. "If Henry Ford were still alive," he said, "I believe he would have also built cars using AI."

Yu's startup is microcosm of much bigger trends spreading through Chinese manufacturing, as Beijing leans on technology to solve problems that were deepening even before the trade war.

Two decades after China became the world's "factory floor" on the back of cheap labor, the United Nations is projecting a steep decline in the workforce as the country ages. By 2050, the pool is expected to shrink by 200 million workers, from the 2015 level. Meanwhile, the average annual pay of Chinese manufacturing workers reached 64,452 yuan ($9,094) in 2017, up 200% from a decade earlier and almost three times the figure in Vietnam, data provider CEIC estimates.

Beijing believes that robotics and other cutting-edge technologies -- like those employed by Pix -- are the solution. They offer not only a way around the dwindling and costlier workforce but also a way to maintain and enhance competitiveness. Indeed, smart manufacturing is the core of the government's "Made in China 2025" plan to promote the development of strategic industries and catch up with Western competitors.

In recent years, China has installed industrial robots at a faster pace than anyone else. In 2018 alone, about 154,000 robots were sold to Chinese factories, data from the Frankfurt-based International Federation of Robotics shows. That was more than the total sales of Europe and the Americas combined. 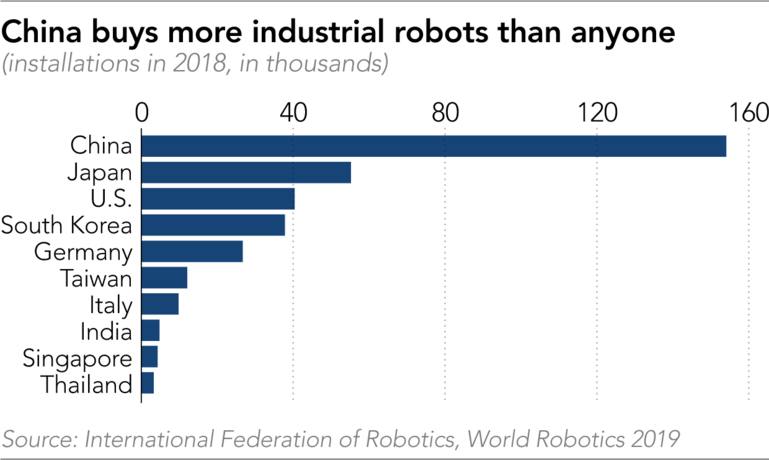 As China's cost advantage fades, "technology innovation has become the means for manufacturers here to stay competitive," said Jack Zeng, a director at the China Industrial Design Institute, which uses data to save manufacturers time and money -- say, by informing them that a planned material was tried but failed in the past.

Taiwan-based Foxconn Technology, which assembles Apple's iPhones in China, is just one example of how humans are being taken out of the equation. An executive at Chinese automation equipment supplier Tamasec Robot, which counts Foxconn as a client, told the Nikkei Asian Review that the contract manufacturer used to hire 100 workers per production line. Now the figure is down to 10.

"It was too difficult for Foxconn to find workers," the executive said, adding that higher labor costs and demand for better-quality products also played a role. At Pix Moving, Yu had an additional, more immediately pressing reason to pursue a smarter manufacturing model. His hometown of Guiyang, where he founded the company in 2014, is in one of China's least-developed regions, hundreds of miles from the auto industry hubs of Guangzhou and Shanghai. The dearth of nearby component suppliers forced him to get creative.

To reduce the number of parts needed to make a car, Yu and his team turned to an AI technique known as generative design, which produces concepts that seem beyond the realm of human imagination. It works like this: Programmers set certain parameters, such as the size of the vehicle and the maximum weight it should carry. Then they let the computers run wild to determine what is possible within those constraints. Algorithms allow the AI to learn and refine the results. Engineers then review the options and choose the best ones for further improvement.

Siddharth Suhas Pawar, a mechanical engineer at Pix, told Nikkei he was often "surprised" by the AI's suggestions. "I would have never thought about making a car that way," Pawar said. On a computer screen, he showed various mock-ups, designed by both humans and AI. The computer-generated designs were far more detailed, with intricate latticelike structures. They are "very complicated to make," he said. That difference, according to Yu, is another reason the company is making waves. Pix had a beginning as unusual as its products.

Yu studied architecture at Chongqing University, a two-hour train ride from Guiyang. After graduating, he returned home to work in his chosen field, only to find the job emotionally unrewarding. He had always been interested in business, he said, and wanted to establish his own. He started out making drones before it dawned on him that he could combine 3D printing and AI to make vehicles.

Yu said his unfamiliarity with automotive engineering was a blessing. Trained engineers, he argued, are cursed by their knowledge. "They can't think outside the box," he said. "What they learned from school and the workplace is just one way to make cars. It is not the only way, nor the best way."

Take the chassis. AI cut the number of parts from thousands to hundreds. As so often happens with technology, however, solving one challenge created new ones. In a corner of Pix's factory in Guiyang, 3D-printed components pile up as the company hones its production process. (Photo by Coco Liu)

Most of the needed parts were too unconventional to be procured from distant suppliers in Guangzhou and Shanghai. Yu's team had to figure out how to print them. And not surprisingly, printing a whole car was far more difficult than a drone. It was not until late 2017, when Yu watched a YouTube video of Dutch engineers making the world's first 3D-printed steel bridge, that he understood how the technology could be used to make larger-scale objects.

After that, his engineers still had to wrestle with everything from gravity to the government's internet restrictions.

Sometimes, when they were trying to print a curved surface, the molten metal would collapse, Yu recalled. In other cases, the robotic 3D printer simply did not move the way the programmers expected. And since some of the software they needed could only be found by circumventing China's Great Firewall, Yu and his team found themselves playing cat and mouse with government censors that were cracking down on the use of virtual private networks, or VPNs.

Pix does enjoy some significant advantages, though.

One is that AI can work around the clock. Yu said this, coupled with the reduced number of components, means it should take the company only 12 months to bring a car from concept to the finish line -- versus 36 months for a traditional automaker. 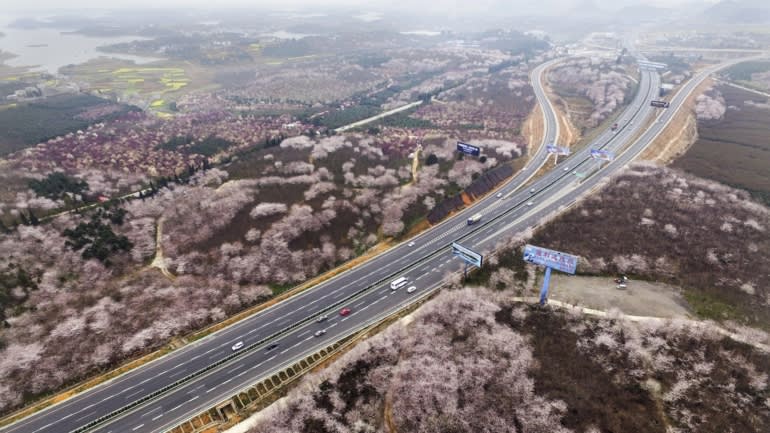 A highway running through Yu's hometown of Guiyang: The city is hundreds of miles from China's auto industry hubs.   © Reuters

Since data orchestrates the entire process, it is also relatively easy to replicate what the company does in China at factories elsewhere. This will allow Pix to make vehicles near its customers, holding down logistics costs. More importantly, the ability to shift production lines anywhere, anytime will shelter the company from unpredictable trade conflicts -- be it Japan versus South Korea, the U.S. versus China or even the U.S. versus Vietnam, which may be Trump's next target.

Industry players are beginning to get wind of Pix's potential, including the Sweden-based, Chinese-owned Volvo and Japan's Honda, both of which have expressed interest in bringing the startup into their incubator programs for unearthing the next hot transportation technology. Silicon Valley-based accelerator HAX and other investors have injected around 10 million yuan. After the latest funding round last year, the loss-making startup was valued at roughly $20 million.

Pix has also won a spot in the digital factory program of U.S. software heavyweight Autodesk, which aims to lay a foundation for the future of manufacturing.

"Pix has a unique and interesting approach to problem-solving," said Matt Lemay, a specialist at Autodesk who invited the Chinese startup to join the program. "Pix's vision of the future, on not just autonomous vehicles but also new methods of design automation and smart manufacturing, makes them a compelling partner."

Unlike traditional automakers, whose production lines are geared to mass production, Yu said his 3D printers can handle small batches -- sometimes as small as one. In April, Pix received its first order from a company in Texas, which wanted a truck for an automated retail business. Since the idea of a self-driving, automated store on wheels is entirely new, the client wanted to try a single truck first. Yu's team happily accepted the request.

Yu said he hopes to grab a slice of the global passenger car market, but for now the company is focused on the niche of autonomous trucks and other customized commercial vehicles.

Although Pix is still working on the design of the truck for the Texas customer, Yu said he has settled on a production site. In August, two Pix engineers moved into a factory in an abandoned cargo port in San Francisco, where they will do the printing as soon as the design is uploaded by their colleagues in China.

"The U.S.-China trade war will motivate more and more Chinese manufacturers to embrace smart manufacturing," Yu predicted. "In the future, international trading will no longer run on cargo but on the cloud."