Pony.ai's self-driving cars have convinced high-profile investors to pour in $300 million, pushing the startup's valuation to $1.7 billion. (Courtesy of Pony.ai)
Startups in Asia

Lou Tiancheng has been cracking computing riddles since he was a teenager and has won some of the world's most prestigious programming contests. Now 33, he has taken it upon himself to solve one of the biggest technological challenges of our time: how to make large numbers of cars drive themselves safely on the world's roads.

"It's a very rare opportunity to encounter a truly challenging technology that allows me to give full play to my strengths," Lou said.

He is making swift progress. Two and a half years since Lou co-founded startup Pony.ai, the company has become China's most valuable self-driving venture. In some respects, it has already overtaken the technology of far larger Chinese player Baidu, regarded as the country's answer to Google.

Yet Lou concedes the biggest technical obstacles lie ahead, such as producing for the mass market. China also maintains tighter restrictions on self-driving cars than the U.S., and there is always a risk that trade tensions with Washington will force ventures like Pony.ai into detours.

Lou, who holds a doctorate in computer science from Beijing's elite Tsinghua University, spent four years in Silicon Valley as an autonomous-driving engineer for Google and Baidu. In late 2016, he set up Pony.ai with James Peng, his colleague at Baidu's U.S. research center. They decided to move the head office to Guangzhou the following year.

Lou was drawn to what he called the "once in a lifetime" challenge and said China's supportive policies and enthusiasm for new technologies made it a better starting point. From day one, Pony.ai's goal has been to reach the pinnacle of autonomous driving tech, known as Level 5. This means the car can drive itself in all conditions -- no steering wheel required.

So far, major investors including Sequoia Fund, IDG Capital Partners and Morningside Venture Capital have poured in a total of $300 million, pushing Pony.ai's valuation across the "unicorn" threshold to $1.7 billion.

The high valuation has been fueled by Pony.ai's strong showings in early road tests.

The company, which keeps a second headquarters in Silicon Valley, is the best-performing Chinese contender in self-driving trials on California's open roads, according to the state's Department of Motor Vehicles. In 2018, it ranked fifth among 48 global players based on auto-drive disengagement, or the frequency with which cars need a safety driver to intervene. 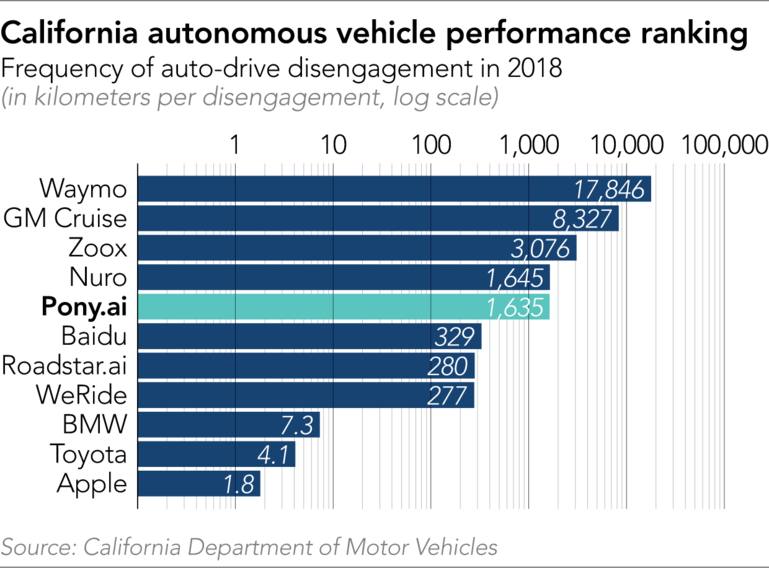 The startup is still not even close to catching Waymo, owned by Google parent Alphabet. The company, which originated within Google 10 years ago, was way ahead at 17,846 km per disengagement. It was followed by the General Motors-backed Cruise, at 8,327 km.

Even so, Pony.ai is racing toward relevance. "We believe Pony.ai has the potential to catch up with global technology leader Waymo," said Ian Zhu, managing partner at NIO Capital, an investor in the company.

To gain ground, Pony.ai has recruited talent from Waymo, along with Baidu, Uber Technologies, Facebook and Qualcomm. Its team of 500 is split roughly evenly between Guangzhou, Beijing and the U.S.

The "robotaxis," which currently must have a safety driver behind the wheel, will give Pony.ai a "big head start" in collecting useful data in another vehicle category and boost its brand awareness, said Mark Natkin, founder of Marbridge Consulting in Beijing, a technology advisory firm focused on mainland China. Lou Tiancheng, Pony.ai's co-founder, says the real question is not whether a few self-driving cars perform well in tests. It is whether a company can produce hundreds of thousands of reliable vehicles. (Photo by Nikki Sun)

Back in China, Pony.ai was the first to launch an autonomous ride-hailing service, beating Baidu's planned launch at the end of 2019 by almost a year. The company currently operates more than 30 self-driving taxis in a test zone in Nansha, a district of Guangzhou about a one-hour drive from the city center, and plans to expand the fleet to 100 this year.

As in California, the vehicles must have a minder behind the wheel, but they switch lanes and make pickups and drop-offs without driver input.

Pony.ai envisions ride-hailing as a major revenue source, in addition to software licensing to automakers and freight services, according to its investor materials. For now, though, a recent visit to the Guangzhou test zone revealed that the vehicles are mostly used by the company's staff for daily commutes, along with VIPs like visiting government officials.

While Pony.ai's "technology caliber" has impressed investors like Kathleen Ying, a partner at private equity firm ClearVue Partners, the company appears to be in no hurry to make a profit.

Instead, the startup is focused on enabling large-scale adoption of self-driving vehicles, which Lou thinks could take more than a decade.

"It's not about how fast you run in the first kilometer of a marathon," said Lou, who believes most self-driving companies, including Waymo, are still in the early development stages. "The real game changer is how to improve the scalability of the technology. It's not about how good the one or two cars perform during the tests. We are talking about hundreds of thousands of vehicles."

Herein lies a fundamental question for any self-driving venture: Do you try to turn early technologies into moneymakers? Or do you focus on the ultimate goal of mass production, which holds the key to transforming transportation as we know it?

Many of Pony.ai's rivals have chosen the former route. 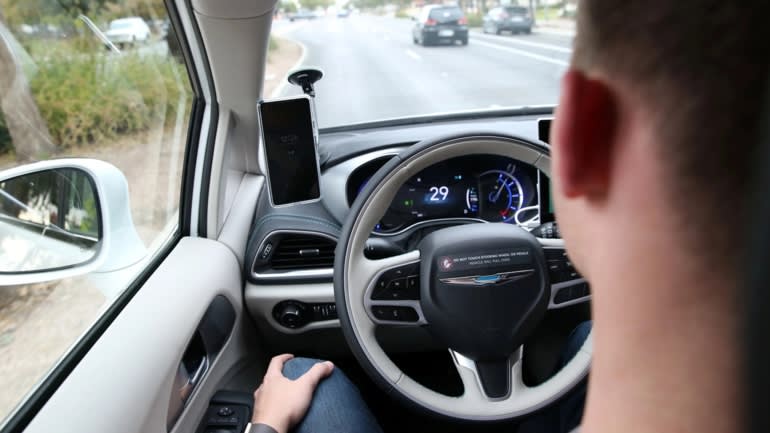 A safety driver keeps watch as a Waymo car drives itself in a demonstration in Arizona.   © Reuters

Baidu earlier this month started offering a self-parking system to automakers. CEO Robin Li said orders are already coming in, and Baidu-backed electric vehicle startup WM Motor expects to put its first car with the feature into mass production by 2021.

"For the next several years, we'll see a number of experiments with autonomous vehicles, but most of them will be for commercial shuttles or in other more limited environments," said Bob O'Donnell, president and chief analyst at California's TECHnalysis Research. The limitations, he said, stem from reliability, regulatory and insurance issues.

Last March, an Uber test vehicle killed a pedestrian in Arizona while in auto-drive mode. The first fatality in autonomous driving history was a cruel reminder that the industry has a long way to go to ensure safety. This will require not only time but also piles of cash.

Components for self-driving vehicles are pricey. A single high-quality Lidar system -- a sort of laser radar that surveys the environment around a vehicle -- can easily cost as much as a whole Tesla electric car.

"Investing in autonomous driving companies is hugely expensive now," said Wayne Shiong, partner at tech venture capital firm China Growth Capital, and "not many investors will have that kind of money going forward." He expects that large auto groups and state institutions will have to provide the bulk of the funding.

The longer the road to profitability appears, the harder it may be to persuade investors. Yet Pony.ai has clearly chosen to scale up. There is "no point to expand [commercialization] blindly," Lou said.

In his view, once technology advances enough to do away with safety drivers, the cost of running a ride-hailing service will plunge. Components will become cheaper, too, as production picks up. Peng, who is responsible for financing, said that Pony.ai has sufficient capital in the bank to support research, and that investors remain keen despite slowing tech investments in China. However, the company could not quantify how much investment it will need to achieve its goal.

"No matter how hard it might be, we will continue to pursue the goal that creates the biggest value," Peng said, referring to the most advanced level of autonomous driving as opposed to short-term commercial endeavors. He said there are no plans for an initial public offering at this time.

Richard Windsor, founder of research company Radio Free Mobile, argues money is not everything. He noted that Apple, Uber and Toyota Motor have all performed poorly in U.S. road tests. What matters, he said, is management's ability to execute their strategies.

As it hones its technology, Pony.ai is actively building ties with automakers and local governments. "Joint efforts of different stakeholders are needed to make autonomous driving work," Lou said.

Pony.ai has teamed up with Chinese automakers BYD -- the world's largest electric vehicle maker -- and state-backed GAC Group in Guangzhou. It intends to bring in four other partners including a Japanese company this year.

A GAC spokesperson said the company has a "strong intention" to pursue in-depth cooperation with Pony.ai and believes the partnership can improve the group's Level 3 and 4 autonomous cars.

One risk facing China's self-driving hopefuls, however, is the U.S.-China battle over trade and technology. This could "definitely impact the Chinese autonomous driving market," O'Donnell warned, as "a great deal" of the underlying technologies come from American suppliers. The list includes graphics processing units along with specialized chips and sensors.

Plus, almost all the leading Chinese companies are conducting road tests in the U.S., where there are currently fewer restrictions than in China. Some argue the high regulatory bar puts Chinese players at a disadvantage that will be difficult to overcome.

But Lou stressed China has made great progress on deregulation and hinted it is only a matter of time before the country becomes self-driving central. "The U.S. can't match the high degree of acceptance of new technologies in China and the great efforts engineers make in advanced research," he said. "It's unlikely that the U.S. government can make the kind of breakthroughs in regulations China made within two years' time."

The Chinese public is indeed much more open to autonomous vehicles, according to the 2019 Edelman Trust Barometer. The study of 26 markets found that 79% of Chinese respondents said they trust self-driving cars, versus only 40% in the U.S. and 50% in Japan.

"China is still not on an equal footing with the U.S. in AI research, but the gap is narrowing," Lou said. "Based on the current momentum of China, we will not only reach the level of U.S. companies but will surpass them by a big margin."